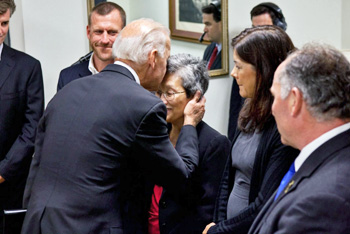 On Sept. 7, Washington-area college students joined Vice President Joe Biden at the South Court Auditorium of the White House to watch a screening of the 9/11 documentary, “Rebirth,” in commemoration of the 10th anniversary of the Sept 11, 2001, terrorist attacks.

During a special White House screening, Vice President Joe Biden greets accountant and burn victim Ling Young and other victims of 9/11 whose stories were followed for nearly a decade in the documentary “Rebirth.”

Director Jim Whitaker began shooting his film in March 2002. He told the audience that he invited his subjects “to be become involved in what I called ‘human time lapse,’ interviewing them once a year, every year, to really explore what they were going through — kinds of thoughts they had in a shower, when they were waking up in the morning — and that became, as it grew together, integrated. That became the project of ‘Rebirth’ … the blending of the physical and emotional healing of the site.”

After editing, the film ends up tracking the suffering and recovery of five people impacted by the terrorist attacks on the World Trade Center. Angry teenager Nick Chirls mourns his mother, who died working at Merrill Lynch, by taking an internship with her employer. Accountant Ling Young struggles to regain functionality after severe burns, undergoing 40 reconstructive surgeries. Tanya Villanueva Tepper, the grieving fiancée of a firefighter who sacrificed his life, moves on with her own life by eventually marrying and having children. Construction worker Bryan Lyons honors his firefighter brother’s death by rebuilding the World Trade Center. Firefighter Tim Brown, who lost many of his best friends, channels his energy as a founding member of the Department of Homeland Security.

At the screening, Vice President Biden noted how 9/11 was a pivotal moment for Americans, similar to how the assassination of John F. Kennedy defined his generation’s place in history.

“When I was at your age, I lived through the second half of the Cold War, the Vietnam War, before that the assassination of the beloved president,” he recalled. “I was at your age, remember hearing the news exactly when I was in the University of Delaware, standing on the steps of Hullihen Hall, when I heard that John Kennedy had been assassinated. Like the 9/11 generation, those events fundamentally changed America. They shaped our history and now they are part of our permanent national identity.”

Biden said that Whitaker “collapsed 10 years of history into the lives of five incredible people. Through this movie, he tells their stories. But really, in a way, he tells us all America’s story. It’s the story of a nation of people who can … because we are a nation about possibilities. I would argue it’s the single most defining feature of America. It’s always about possibilities. It ultimately always is about tomorrow. It’s always about hope.”