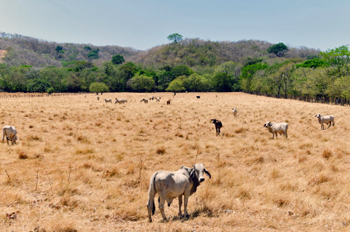 Only 15 years from now, permanent drought conditions triggered by climate change have crippled food production throughout Central America. Once-fertile farmland has turned to desert, forcing millions of farm workers to flee their villages in El Salvador, Guatemala and the southern Mexican states of Chiapas and Oaxaca.

Armed insurgents have taken control of the main cities, and by 2027, refugees have swelled Mexico’s population to 155 million, leading the United States two years later to fortify its southern border — at a cost of $1.6 trillion — with minefields and automatic machine gun-toting robots that kill anyone desperate enough to try to cross it.

This dystopian vision, outlined in Gwynne Dyer’s bestseller “Climate Wars: The Fight for Survival As the World Overheats,” is still fiction — but experts warn of a grim future indeed for Central America unless the region quickly adapts to the realities of a warming planet.

A herd of young brahman cattle stand in a field during the dry season in Guancaste, Costa Rica.

“Over the last four years, the Central American isthmus has endured more than 50,000 deaths and the displacement of 10 million people,” said moderator Kevin Casas-Zamora, a former vice president of Costa Rica. “Since the 1970s, climate change events related to disasters have grown by 5 percent a year. The number of hurricanes has increased five-fold, and the number of floods has tripled. Only Hurricane Mitch — arguably the worst disaster ever to hit Central America — cost $16 billion. With half the population living in poverty, the region’s governments face an impossible task of having to constantly rebuild their infrastructure.”

And even though Central America “contributes next to nothing in global warming,” the region suffers the brunt of its consequences, he said.

“Dire as it is, the challenge of mitigating and adapting to climate change also offers the region an opportunity to develop new economic sectors,” said Casas-Zamora.

Central America accounts for only 0.5 percent of global greenhouse gas emissions, yet it’s considered a “hotspot” for climate-related damages in the future, along with sub-Sahara Africa, Bangladesh and the Maldives.

“It’s very clear that Central America’s population is increasingly vulnerable, not just to extreme events but also to droughts and rainy seasons, and polarized economic and political scenarios,” said Girot, who spent 25 years with the United Nations and the Inter-American Development Bank on risk-management issues.

“Even with average rainy season weather, we’re seeing a lot of countries sustaining increasing losses,” he warned. In coming years, “we expect a 20 percent decrease in rainfall in northern Central America, an increase in rainfall in coastal regions of Panama and Costa Rica, an increase in extreme events, and a decrease in available rainwater, which will have a huge effect on small farmers.”

“It’s very clear, from what we’re seeing, that water will be at the heart of the issue,” he said. “We need to address ways of living with less rain and more unreliable rainfall patterns, and we need to invest more in drip irrigation technologies over time.”

The problem, Girot explained, is that since the devastation wrought by Hurricane Mitch in 1998, the focus has been on risk reduction rather than on wise investments.

Ferraté, a former Guatemalan minister of the environment, put it more bluntly.

“This is matter of life and survival,” he warned. “Climate change affects food security. If we don’t find solutions today, our children and grandchildren will be far more seriously affected than we ourselves are. The question we Central Americans must ask is how many thousands and millions of lives throughout the world will have to be lost before we take action.”

Daboub, El Salvador’s former finance minister, said the world needs to spend $30 billion to $100 billion annually for the next 25 years just on adaptation alone . That doesn’t even include mitigating the effects of climate change. Of that total, Central America will need to spend around $1 billion a year.

“We will not be able to tax our way out of the challenge,” he said. “No government can cover that cost.”

The answer, he said: Private-sector investment.

“Mitigation is not working, and at the global level I don’t see an agreement in the near future. Let’s hope and wish there’s an agreement, but in the meantime, action needs to be taken. Adaptation therefore is essential.”

When it comes to climate change, Daboub told us in a subsequent interview that “a country like El Salvador has significant vulnerabilities in terms of water, infrastructure, food production and health care, but has made some significant progress — especially between 1998 and 2004 — in the readiness component. We were unable to reduce vulnerability, but because we became a country with higher economic development, better social preparedness and a little stronger governance structure, we were able to generate the resources so that people could be more resilient.”

Daboub’s unabashedly pro-business Global Adaptation Institute has put together what it calls a “global adaptation index” (GAIN), which assigns countries scores from zero to 100 based on their vulnerability to climate change and their ability to adopt solutions.

Based on that index, Panama ranks highest of Central America’s seven countries with a score of 67.2. The rest fall closely behind: Costa Rica, El Salvador, Belize, Honduras, Nicaragua and Guatemala.

Worldwide, says GAIN, the countries best prepared for global warming are Denmark (85.3) and Switzerland (83.5), while the least prepared are Zimbabwe (38) and the Central African Republic (37.6).

“The most vulnerable regions of the world in terms of their resilience capacity are Africa and the Middle East,” said Daboub. “The kind of projections we have seen in terms of oceans rising varies from place to place, and in some countries from zip code to zip code. So if you’re going to Costa Rica tomorrow for a vacation, unless there’s an earthquake that produces a tsunami, the risk of oceans rising is not something you’d be preoccupied with. But if you’re making a long-term investment, then you’d certainly need to take that into account.”

Yet José María Figueres, president of Costa Rica from 1994 to 1998, cautioned that “we’re not seizing the opportunity to move in the direction of a new low-carbon economy.”

“Somehow we are again caught up in doing the urgent, without paying importance to the issues we should really be looking at,” said Figueres, insisting that half of Central America’s carbon emissions could be eliminated “through viable business propositions, without any need for further legislation.”

For example, there’s no reason why the region cannot be 90 to 100 percent dependent on renewable energy in the next 20 years, he argued.

“This would create a tremendous amount of jobs and investment opportunities, instead of continuing to rely on fossil fuels, which are only going to get more expensive and which are already having a tremendous impact on Central America’s balance of payments,” he said, warning his audience that “unless we become absolutely serious with respect to these issues, we’re going to have a very unhappy and very unfriendly planet.”