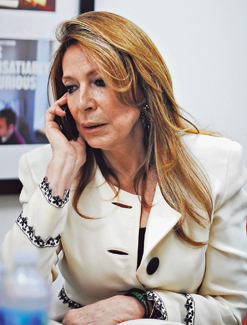 Few who met Ivonne Baki during her time here as Ecuador’s ambassador have forgotten the glamorous diplomat — a Harvard graduate with six languages under her belt who also made a name for herself as a talented artist and dedicated peace negotiator.

These days, Baki, who’s back in Quito working for President Rafael Correa, is leveraging her D.C. connections to promote an even bigger cause: saving one of the world’s last pristine Amazon rainforests from destruction by eager oil companies.

But she’s not doing it through protests, fundraising, lobbying or the usual eco-campaigning. She’s part of one of the most daring schemes in the history of the environmental movement — one that, if it succeeds, could have a profound effect on future conservation efforts. How does it work? The international community is literally paying the Ecuadorian government not to drill on the land. It’s essentially a bribe — but a noble one.

Ecuador’s Yasuní National Park, which has been designated as a UNESCO World Biosphere Reserve, covers 10,000 hectares — slightly more than half the size of the District of Columbia.

Just one of those hectares, says Baki, contains more tree species than all of North America, which is why the entire rainforest must be preserved at all costs — even though an estimated 846 million barrels of petroleum lie underneath all this diversity.

Ivonne Baki, former ambassador of Ecuador to the United States

The idea behind the Yasuní Ishpingo Tambococha Tiputini (Yasuní-ITT) Initiative is simple: Ecuador vows to keep all that petroleum forever in the ground in exchange for collecting a payment of $3.6 billion — about half the oil’s value — over a 13-year period. By doing so, the country will support the livelihood and culture of nearby indigenous tribes living in voluntary isolation while ensuring net avoided emissions of 1.2 billion metric tons of the greenhouse gases that cause global warming.

“It’s a very difficult thing for Ecuador to take this decision, because we need this oil,” Baki recently told The Washington Diplomat. “But it’s a brave decision.”

To promote the Yasuní project, Baki enlisted her old friend, actress Bo Derek, to be its goodwill ambassador. Her government has also hired public relations powerhouse Ogilvy & Mather to spread the word; in fact, we interviewed the former ambassador at the PR firm’s downtown Washington offices.

“Ogilvy will be running the international campaign, positioning and raising awareness in key markets: Europe, the Middle East and the United States. Our goal is to make sure decision makers in the public and private sectors are aware of our initiative,” said Baki, though she declined to specify how much Ogilvy’s campaign is costing taxpayers back home.

According to a press handout, “the Yasuní-ITT Initiative addresses global warming by preventing the release of carbon reserves into the atmosphere. This involves non-exploitation of the vast oil reserves to be left indefinitely underground and, in the case of the forests, guaranteeing the conservation of these giant carbon sinks.”

Some view the deal as outright extortion, but Baki says it’s really about saving future generations from the ravages of climate change, with the emissions saved from keeping Yasuní’s oil in the ground greater than the annual emissions of countries such as Brazil or France.

“That’s why we’re asking the world to protect it, because it’s not only for Ecuador,” she told us. “This is still the most bio-diverse, unique place in the Amazon. It’s at the intersection of the Equator and the Andes mountains. Global warming hasn’t affected it, so when you go there, it’s like nothing has changed. Everything is intact.”

Baki, who’s been to the remote rainforest paradise about 10 times since taking on this latest challenge, said the petroleum trapped underneath Yasuní represents up to 20 percent of Ecuador’s total oil reserves. That’s nothing to sneeze at for a country where poverty remains pervasive despite decades of lucrative petroleum exports.

“We are not against extracting the oil in general,” said Baki. “Only in this place, because even with the best technology, it’s impossible not to damage the biodiversity.”

She said President Correa has made Yasuní-ITT his top priority, and that 78 percent of her country’s 12 million inhabitants support the initiative. The Correa government also stresses that contributing to the fund is not a form of charity, pointing out that even though Ecuador is asking for $3.6 billion under the deal, it is also forgoing more than $3 billion in potential oil profits.

“But he’s disappointed by the world. He thought there would be a much bigger reaction,” Baki said.

That’s partly because the big push for donations coincided with the onset of the 2008 global financial crisis, which has constrained the ability of many potential donor nations to help Ecuador out. It remains to be seen if the government will abandon the accord if the money fails to eventually filter in.

Even so, Baki said, the Yasuní-ITT Trust Fund administered by the United Nations Development Program contains $120 million and “is growing every day” with donations coming in from around the world. Governments that have given the most include Italy, Spain, France, Germany and Belgium, with smaller amounts donated by Turkey, Georgia and Lebanon — the country where Baki spent most of her childhood and early adulthood.

Ecuador has also gotten some support from corporate donors like Coca-Cola and Brazilian construction conglomerate Odebrecht, as well as from fellow members of the Organization of Petroleum Exporting Countries (OPEC). 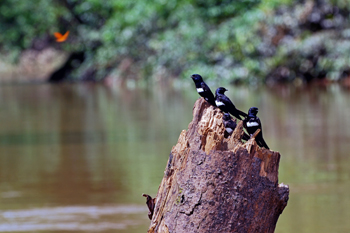 White-banded swallows perch on a tree stump in Ecuador’s Yasuní National Park, arguably one of the most biologically diverse locations on Earth.

“Being oil-exporting countries, they believe in conservation, so they support our initiative unanimously,” said Baki. “Ecuadoreans are also giving to the fund. Every day, people are giving money online, in amounts as small as $10. These small amounts are getting to be big.”

Not everybody, however, is enamored with Baki or her Yasuní-ITT Initiative. Some of Baki’s detractors accuse her of having tried to help one of the world’s biggest oil conglomerates — Chevron — thwart an $18 billion legal judgment against it in exchange for a much smaller donation to the rainforest project.

The Amazon Defense Coalition alleges that Baki promoted a “billion-dollar bait-and-switch” whereby oil giant Chevron would pay $500 million to the Yasuní project and another $500 million directly to the Quito government.

In exchange, the group alleged, the Correa government would discreetly use its political influence to quash an $18 billion lawsuit that indigenous tribes had filed against Chevron for deliberately discharging 16 billion gallons of toxic waste into Ecuador’s Amazon when, operating as Texaco, it had an oil concession there from 1964 to 1992.

“We’re not about to give Chevron a get-out-of-jail-free card by donating to the Yasuní,” local environmentalist Esperanza Martínez told the online Huffington Post in an interview. “Not only would such a donation violate the rights of thousands of Ecuadoreans who are victims of Chevron’s misconduct, it would also violate the very spirit of the initiative. In short, Ecuador is not interested in Chevron’s blood money.”

“Chevron and Baki think Ecuadorean officials are still running a banana republic government willing to sacrifice the rights of their own citizens for a small bribe,” added Pablo Fajardo, lead lawyer for the Ecuadorean plaintiffs who won the judgment against the oil conglomerate.

In 1998, according to Amazon Watch, Baki — as Ecuador’s ambassador under then-President Jamil Mahuad — “signed an official letter to a U.S. federal judge in New York seeking dismissal of the environmental lawsuit against Chevron.” Throughout 2004, while serving as Ecuador’s trade minister, alleges the NGO, “Baki helped organize and participated in several meetings between Chevron and high-level Ecuadorean officials — including the attorney general — which sought strategies to end the case. During one of those meetings, rainforest residents staged a sit-in in her offices and demanded she stop efforts to undermine the legal case against the company.”

Asked about the allegations against her, Baki angrily called them all lies.

“They invented all that and were mentioning it just recently because they claimed it’s impossible to raise $100 million without money from Chevron,” the former ambassador told us. “There was no money that came for Yasuní from Chevron. If our account grew during that time, it was because we received 35 million euros from Germany.”

At any rate, she said the controversy is irrelevant and detracts from all the goodwill her project is generating.

“I don’t want to mention any amounts of money because I don’t know how much I have,” she said, estimating the fund’s current assets at around $200 million. “The account is growing every day, and I cannot ask every day how much is there. But that’s not the issue. Talk instead about Rio+20 and our new strategies. That’s much more important.”

Baki also pointed out that her efforts have the full support of both Correa and the woman who now serves as Ecuador’s ambassador in Washington, Nathalie Cely.

“This is a full-time job,” Baki told us. “There are so many things I’m postponing because I believe in this. I told the president I’m giving it one or two more years, because this is the moment. If we don’t do it now, the crisis that’s going to be created will be much worse than the economic crisis.”