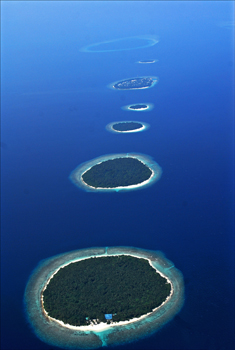 Several months ago, at a Pacific Day celebration hosted by the Embassy of New Zealand, dignitaries from more than a dozen nations enjoyed performances by Australian didgeridoo player Cameron McCarthy, New Zealand’s Kahurangi professional Maori dancers, as well as dance and cultural groups from Samoa, Fiji and Hawaii.

They also feasted on a variety of foods from across the Pacific, including banana plantain cooked in coconut milk from Micronesia; tapioca from Palau; grilled milk fish from Papua New Guinea; and kalel pumpkin and rice bobo from the Marshall Islands.

What a shame it would be if some of these exotic islands literally disappeared under rising seas — triggered by global warming that we ourselves caused.

Moses is also the United Nations permanent representative of Nauru, an eight-square-mile Pacific atoll that once earned billions in phosphate exports, giving it one of the world’s highest per-capita incomes.

These days, however, Nauru is more worried about its very existence — as are dozens of other low-lying islands around the planet, from the Maldives in the Indian Ocean to the Bahamas in the Caribbean.

“Despite two decades of escalating warnings and costly impacts, we have made insufficient progress toward lowering greenhouse gas levels responsible for this crisis,” Moses told the Pacific Day delegates. “The political appetite to do what is necessary is at the lowest point that I can remember.”

Seven of the 1,192 islands that make up the Maldives are seen in this spectacular aerial view on a flight from the capital of Malé to Meedhupparu, in the Raa atoll.

Moses said AOSIS “is recognized for the moral authority that comes from representing some of the world’s smallest and most vulnerable states. If the international community cannot ensure the continued existence of all states, then we have all failed.”

In February 2008, former Ambassador Masao Nakayama of Micronesia warned a U.S. House of Representatives panel that “climate change is about our very existence — our existence as a country.” That testimony occurred one year after the Intergovernmental Panel on Climate Change declared that the evidence for human-caused global warming was “unequivocal.”

Yet since then, the worst-case scenarios imagined by that panel have been realized or exceeded. Studies now predict that sea levels could rise by five feet by the end of this century. Combined with increasingly severe storm surges and other extreme weather events, this would be disastrous for island states, warns AOSIS.

In addition, new research suggests that small island nations could lose parts of their exclusive economic zones as their outer atolls succumb to the rising waters.

In the face of these growing threats, Micronesia has proposed a number of fast-action strategies for climate mitigation in the near term. This includes an amendment to the Montreal Protocol to slash production and use of hydrofluorocarbons (HFCs) by 85 to 90 percent. That would achieve climate mitigation equivalent to 100 billion tons of carbon dioxide by 2050.

After the Micronesians first proposed phasing down these super-greenhouse gases, a similar proposal was submitted by the United States, Canada and Mexico.

“Reducing HFCs is critical for slowing sea-level rise in the short term,” said Micronesia’s current ambassador, Asterio Takesy. “In Durban, the world agreed to develop a new climate plan by 2015 to go into effect in 2020, but we need action now, and an agreement to phase down HFCs under the Montreal Protocol is the best strategy this year. We’re asking all at-risk islands and coastal states to join us to ensure a successful outcome this year.”

The second strategy Micronesia first promoted has since garnered significant international support: the fast mitigation of short-lived climate pollutants (SLCPs). Fast action to reduce these pollutants — including black carbon soot, methane and tropospheric ozone — is, along with HFCs, an essential complement to slashing carbon dioxide, and a strategy that can produce results in the next few decades, according to Takesy.

Durwood Zaelke, president of the Institute for Governance and Sustainable Development, said SLCPs are the second-largest contributor to climate change after CO2. He also agrees with Micronesia’s plan to target HFCs.

“Let’s stop making them,” said Zaelke. “This would remove 100 billion tons of CO2 equivalent, which is 5 percent of what we need to stay below 2 degrees Celsius. And it can be done with existing technologies.”

He added: “Climate despair is now beginning to infect the world. These solutions can show us we are smart enough to solve the problem.”

Concern about the catastrophic damage climate change might wreak on small island states isn’t confined to the Pacific. According to a new report by the Oxford University Centre for the Environment, every Caribbean island faces huge economic losses caused by rising sea levels in coming decades — resulting in the loss of hospitals, airports, power plants, multimillion-dollar tourist resorts, roads, bridges and farmland.

Damages in the 15 member states of Caricom would amount to between $4 billion and $6 billion annually, said the study, which didn’t consider the costs of coral reef losses or the possibility of increased hurricane or storm activity with climate change.

“Small islands and countries with low-lying coastal areas are now at high risk from global warming and sea-level rise. This has been repeated so often that even the people of small states seem to have become immune to the catastrophic effects that they are facing. It seems that almost every government in the world is waiting for disaster before they act,” observed Ronald Sanders, a former diplomat from Barbados.

“But, by taking no collective action, governments of small countries are in danger of being complicit with the polluting nations in neglecting their own plight,” he added. “If they wait too late to wake up to the absolute necessity of defending their own existence, not even survival might be possible.”

According to the Oxford study, the Bahamas, Guyana, Suriname, Trinidad and Belize would suffer the greatest economic losses in absolute terms, though the hit to smaller states like Grenada, St. Lucia and St. Kitts and Nevis would be proportionally greater.

“Some of our countries, like Kiribati, Tuvalu, the Cook Islands, the Maldives and the Marshall Islands, are going to drown. They face the end of history. They are in a desperate situation,” warned Antonio Lima, ambassador to the United Nations for Cape Verde, a 10-island chain off Africa’s west coast. “All of us face disaster. We don’t want to be the forgotten, sacrificed countries of the 21st century.”

The Maldives isn’t waiting for help to arrive. The country is comprised of 1,192 islands — most of them remote and uninhabited — yet its capital city of Malé, occupying an island measuring one square mile, contains 90,000 of the nation’s 385,000 inhabitants. So it’s using tourism revenues to build Hulhumalé, a box-shaped artificial island constructed from landfill just across the sea from overcrowded Malé.

Yet man-made Hulhumalé neither looks nor feels anything like its natural sister islands. From its conception only eight years ago, in 1997, to its official inauguration on May 12, 2004, this work in progress is being meticulously planned to boost the country’s economic fortunes while staving off the rising seas that may one day wipe much of the Maldives off the map.

For starters, Hulhumalé is, by Maldivian standards, high ground: It rises two meters above the sea, double the elevation of some 80 percent of the other islands, measured at their highest points. With worldwide sea levels rising up to nine-tenths of a centimeter per year, the entire country — save Hulhumalé — could be inundated within a century. And Hulhumalé’s wide boulevards, carefully landscaped gardens and serried ranks of apartment blocks offer a dramatic contrast to the impromptu, colorful hubbub of Malé, only 20 minutes away by ferry.

Hulhumalé was the brainchild of former President Maumoon Abdul Gayoom, who in 2008 stepped down after a 30-year dictatorship. Under Gayoom, the Maldives became the first country to sign the 1997 Kyoto Protocol urging reductions in greenhouse gas emissions.

It was Gayoom, too, who, after severe flooding in 1987, secured Japanese financing to build a concrete breakwater three meters tall around Malé. And well before “global warming” became a household term, at the 1992 Earth Summit in Rio de Janeiro, it was Gayoom who warned that his country might have less than a century before it disappeared underneath the waves.

Yet such expensive projects are not an option for many AOSIS member states, given that it costs $4,500 a meter just to protect airports, meaning these countries would have to spend hundreds of billions of dollars to erect protective barriers that may or may not keep the floodwaters at bay. This is why AOSIS members don’t want to use adaptation money to build sea defenses. Nor do they want to compromise on their insistence of holding the world to no more than a 1.5-degree rise in temperatures, rather than the 2 degrees proposed by the United States and Europe.

“AOSIS recently presented our ‘work plan for survival’ in Bonn, which highlights the immediate need to begin raising mitigation to the level required to keep well below 1.5 degrees Celsius,” said AOSIS Chairwoman Moses. “I wish I could say it was warmly embraced, but the response was lackluster. I believe the world has become complacent as the challenges have become greater. As leaders, we need to demonstrate political will to ensure that what we agreed to do at Rio and the U.N. are not more than just words, that we’re doing more than just putting on a show.”

To that end, the June 20-22 United Nations Conference on Sustainable Development, better known as Rio+20, “proved to be a mixed bag for the Pacific islands.” That’s the conclusion reached by researcher Elke Larsen of the Washington-based Center for Strategic and International Studies.

These include a commitment by leading industrial nations to reduce sea pollutants that affect fishing stocks and helping the islands become energy-independent through renewable sources like wind and solar. Under the previously signed Barbados Declaration, a number of countries including Australia, New Zealand, Great Britain, Denmark and Norway have agreed to help Fiji, Nauru, Palau, Tonga, Samoa, Tuvalu and the Cook Islands reach their renewable energy goals by 2030 at the latest.

Unfortunately, writes Larsen, Rio+20’s relative achievements on marine protection and renewable energy stand in contrast to those regarding mining, which she says is “incompatible” with the goal of sustainable development.

“Although seabed and onshore mining in Fiji, the Solomon Islands and Papua New Guinea will undoubtedly boost GDP and provide potential for development, extractive industries should not be categorized as being sustainable,” said Larsen. “Most export profits from mining go to the companies that make the initial investment, and compared to other industries, relatively little is reinvested in local communities…. One need only look to the skeletons of Nauru’s phosphate industry as testimony.”