Home The Washington Diplomat August 2012 Embassy Protests Make Noise, But Do They Make a Difference? 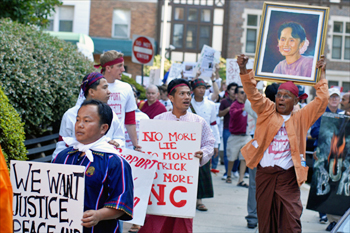 In early June, Jay McGinley finally took a bite to eat. The seemingly routine meal stood out because it was his first in 39 days. Up until that point, McGinley had led a one-man hunger strike outside Canada’s embassy on Pennsylvania Avenue, seeking to convince the U.S. government not to use energy produced from Canadian tar sands.

It wasn’t McGinley’s first such protest — in 2007 he had similarly starved himself for 44 days outside the Sudanese Embassy in Washington to protest the government’s actions in Darfur. It also may not be the last anyone sees of him — he told supporters that he’s looking to recruit fellow hunger strikers for a larger protest to come.

Just as Canada’s well-located and iconic embassy served as the focal point of McGinley’s ire, the roughly 170 embassies located in Washington are both centers for international diplomacy and rich targets for protests and demonstrations. Ever since foreign governments established missions in Washington, they have run the risk of being protested — and many of them have. Whether anti-fascist protesters picketing the Japanese Embassy in 1937 or the thousands of demonstrators that marched on South Africa’s mission to decry apartheid, the protests have brought events happening in faraway lands home to the nation’s capital.

The protests can serve as an outlet for expats, exiles and refugees who want to express solidarity with their country without running the risk of returning. In 1979, for example, 76 supporters of the Ayatollah Ruhollah Khomeini were arrested outside the Iranian Embassy — then controlled by an ally of Mohammad Reza Shah Pahlavi. In 1989, 3,500 Chinese students marched from the Lincoln Memorial to the Chinese Embassy to mourn those lost in the Chinese government’s crackdown at Tiananmen Square. In 1995, it was the Nigerian Embassy that was targeted by opponents of the country’s military dictatorship.

Over the years, the Chinese Embassy in Washington has been a focal point for public anger, including members of the Falun Gong spiritual movement, for instance, and protesters criticizing China’s support of the Burmese military regime, seen above.

China should be used to the protests. Members of the Falun Gong routinely camped out in a small park directly across the old Chinese Embassy on Connecticut Avenue to denounce the government’s clampdown on the spiritual movement, drawing the attention of motorists crossing the Taft Bridge over Rock Creek Park. When China moved into its grand new embassy in Van Ness, the Falun Gong protests dwindled, though the gleaming new mission still attracts the occasional angry crowd, such as protests condemning Beijing’s support for the Burmese military junta.

More recently, in early 2011, hundreds of Egyptians protested outside their embassy in Washington to demand that President Hosni Mubarak step down, while Syrians appeared outside of their embassy in Kalorama Heights to decry the bloody crackdown by President Bashar al-Assad.

In fact, allegations surfaced last summer that Syrian Ambassador Imad Moustapha and his staff were spying on the dissidents protesting outside the embassy, with an eye on harassing their family members back in Syria.

“We received reports that Syrian mission personnel under Ambassador Moustapha’s authority have been conducting video and photographic surveillance of people participating in peaceful demonstrations in the United States,” the State Department said. “The United States government takes very seriously reports of any foreign government actions attempting to intimidate individuals in the United States who are exercising their lawful right to freedom of speech as protected by the U.S. Constitution.”

The State Department confined Moustapha to remain within a 25-mile radius of the city; shortly afterward, he returned to Syria and then became Damascus’s envoy in China.

The protests have also provided Americans with a focal point for expressing national outrage or concern. After the Iranian Revolution, Americans protested the seizing of their embassy in Tehran outside of Iran’s mission in Washington. And in the wake of Venezuelan President Hugo Chávez’s comments referring to President George W. Bush as the “devil” in a 2006 speech to the U.N. General Assembly, a small group quickly gathered to protest outside the country’s mission in Georgetown.

These demonstrations can also provide a useful sounding board for issue-based advocacy, such as McGinley’s hunger strike as a means to draw attention to climate change, or a 1971 protest against the Canadian mission targeting the practice of seal hunting. In 1993, it was the French Embassy’s turn, as anti-abortion activists used the mission as a means to oppose the marketing of RU-486, a French-made abortion pill, in the United States.

They also serve as a space for symbolic protests, as when actor George Clooney and various members of Congress were briefly arrested outside the Sudanese Embassy in Washington in March, generating headlines around the world.

Probably one of the longest-running protests outside of a diplomatic mission in Washington is the one-man demonstration led by John Wojnowski outside the Embassy of the Holy See on Massachusetts Avenue, across from the U.S. vice president’s residence. For 14 years, Wojnowski has stood outside the embassy at rush hour holding signs accusing Vatican officials of concealing and protecting pedophile priests; the Polish-born retired ironworker cites his own history of abuse as the spark that led him to take up the protest in 1998.

In the most effective embassy protests, though, U.S.-based groups have tied their own struggles to those of their counterparts in other countries. Throughout the 1970s and ’80s, this was no more apparent than at the South African and Soviet embassies, where large groups regularly protested and were often arrested.

During the apartheid regime, demonstrators linked to America’s own civil rights movement regularly protested outside the South African Embassy on Massachusetts Avenue, attracting broad attention and employing tactics that they had used against state governments and police in the United States, including a sit-in that saw three people arrested. In 1985, 4,000 people descended on the mission in a particularly large protest, including a number of senior officials in D.C.’s local government who were arrested. That year, according to police, more than 1,800 people were arrested at the South African Embassy in a number of protests. The names of those arrested ran the gamut from day-by-day activists to legendary figures such as Rosa Parks, Arthur Ashe and Stevie Wonder.

The Soviet Embassy was similarly a long-running target of demonstrators, primarily Jewish activists and religious leaders determined to highlight the treatment of Jews in the Soviet Union. Throughout the 1970s and ’80s protests took place outside the Soviet mission on 16th Street; in June 1985, 21 rabbis were arrested protesting the treatment of Jews, only a month after 25 other religious leaders had similarly been detained for airing their grievances to Soviet diplomats. (In 1973, police forbade what would have been a particularly creative protest — a group of Jewish youth had planned on bouncing basketballs outside the embassy to protest the abuse of Israeli basketball players at the World University Games in Moscow.)

It was those very protests against South Africa and the Soviet Union that provoked a larger debate and discussion on how free demonstrators could be in airing their grievances outside of diplomatic missions in the U.S. capital.

In the mid-1980s, a conservative group filed suit after its members were prohibited from protesting outside the Soviet and Nicaraguan embassies. The ban stemmed from a 1937 law passed by Congress stating that protesters had to remain at least 500 feet away from embassies, and prohibited any signs that could bring a foreign government into “public odium” or “public disrepute.” In 1986, the U.S. Court of Appeals upheld the law, but two years later it was largely overturned by the Supreme Court, which ruled that protests could take place within 500 feet provided they did not disrupt “normal embassy activities.”

Whether the protests accomplish anything is certainly in question, as McGinley’s aborted hunger strike illustrated. Wojnowski’s one-man crusade against the Vatican isn’t what forced the Catholic Church to confront pedophile priests, though he does serve as a constant reminder of the scandal to the thousands of motorists who pass him on a daily basis. And though Clooney’s recent arrest brought a flood of media attention, it surely didn’t change the dynamic in Sudan more than the years of dedicated lobbying and advocacy have.

Where the protests have been successful is in linking local and global movements, as was the case with South Africa. The outcry against the apartheid government was widespread and international, and protests at its embassy in Washington served to put pressure additional on the U.S. government and Congress to act.