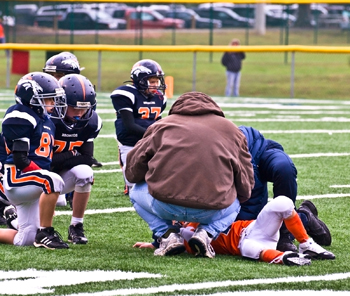 I grew up in Nebraska, where football is a religion. On football Sundays, the second-largest city in the state is Cornhusker Stadium at the University of Nebraska-Lincoln. The memories of my youth are punctuated with crisp fall Friday nights at the high school field, and Saturday afternoons in front of the TV with my father yelling encouragement — or scorn — at the Huskers’ latest play.

Football was an integral part of my childhood. But I will never, ever sign a permission slip to allow my son to play football.

Apparently I’m not alone. An Associated Press poll taken last summer found that 44 percent of parents weren’t comfortable letting their children play football — and participation is down at both the elementary and high school levels. According to the National Federation of State High School Associations, nearly 1.1 million students played 11-man football during the 2012-13 school year, down approximately 10,000 from the year before and more than 20,000 since the 2008-2009 school year. Participation in Pop Warner, the nation’s top youth football program, dropped 9.5 percent between 2010 and 2012.

As a growing body of research has established the long-term risks posed by repeated concussions and near-concussions sustained by NFL and college football players, doctors and parents have also begun to focus concern on the brain injury risks of football for younger players.

Football accounts for about half of all concussions in youth sports; the only other sport that comes close is ice hockey.

High school football players have a concussion rate that is 11 percent higher than their college-age counterparts, according to a study published in May in the Journal of the American Medical Association Pediatrics. Another study, presented at the Radiological Society of North America’s annual meeting last December, found that players who sustained heavy hits for just one season — without a single diagnosed concussion — still had observable brain abnormalities on MRI scans.

At least two class-action lawsuits — one in Mississippi in 2013 and another in Illinois just this summer — have been filed seeking major changes in the way concussions are handled at the high school level, such as mandatory baseline testing for all football players, stricter guidelines on returning to play and the presence of medical personnel at practices in addition to games.

According to the Centers for Disease Control and Prevention, all 50 states have now passed some type of “return to play” law regarding concussions in sports for youth and high school players, generally requiring that an athlete believed to have sustained a concussion be removed immediately and only returned to play or practice after at least 24 hours, and after having received clearance from a medical professional.

But the laws aren’t always consistent, nor are they consistently followed. Even when they are, they may not be sufficient. A report from Minnesota Public Radio News in September 2014, for instance, noted that the state’s law doesn’t require high schools to track concussions, and not all do, nor do all schools perform “baseline” testing of players’ cognitive abilities at the beginning of the season.

In another example, an Iowa football player won over $1 million in a lawsuit against his school district after head injuries he sustained in a game three years ago left him in a wheelchair. The judgment found that the school nurse who assessed him erroneously failed to diagnose a concussion, and did not notify his coaches or parents.

Two high school football players died within days of each other after sustaining head injuries in the fall of 2014, one in Alabama and one in Long Island, N.Y., and in one shocking incident in the Boston area in 2012, five Pop Warner players — all ages 10 to 12 — sustained concussions in a single game but returned to play later.

And while many youth and high football organizations have limited contact drills and adopted so-called “Heads Up” tackle policies that stress tackling with the shoulder instead of the head — a program introduced in 2012 by the NFL’s youth development arm — there’s no data yet on whether this is making a difference in the number of concussions. Most state laws do not address primary prevention of concussion in youth sports.

When I say that I’m not going to allow my son to play football, people sometimes respond that kids can’t be kept in a bubble, or that all sports have risks — that indeed, you could get a concussion in almost any sport, from swimming to lacrosse to tennis, if the circumstances are right. That’s true.

But football accounts for about half of all concussions in youth sports; the only other sport that comes close is ice hockey. Soccer’s concussion rate is less than one-third that of football, with basketball and volleyball even lower.

And sure, a child could damage his elbow pitching in high school baseball, or blow an ACL on a family ski vacation. But what it comes down to for me is that you don’t think with your elbow or your ACL. You can fix a damaged elbow or a torn ACL. But damage to the brain is not so easy to fix.

When he announced his retirement from the game after just one season in the NFL due to fear of brain injuries, San Francisco 49ers linebacker Chris Borland had some words for parents who watched his decision: “If you weigh the risk and decide this is something you want to partake in…. It’s a free country,” he said. “But If I could relay a message to kids and their parents it would be twofold: Number one, make an informed decision. And number two, don’t play through concussions. Who knows how many hits is too many?”

Exactly. My child’s brain is a wondrous and magical thing. And I’m going to do what I have to do to protect it.