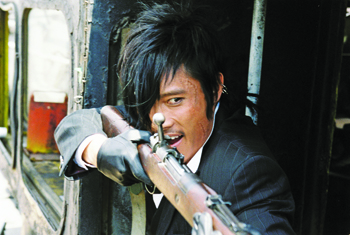 The Good, the Bad’ Amounts to Spicy Kimchee Western

“The Good, the Bad, the Weird,” a wickedly fun action comedy by South Korean writer-director Kim Ji-woon (“A Tale of Two Sisters”), pays loving homage to Italian filmmaker Sergio Leone’s classic spaghetti westerns, particularly 1966’s “The Good, the Bad and the Ugly”—the third of the “Man with No Name” trilogy that launched Clint Eastwood as a global star. Kim’s tribute has been alternately dubbed a “Manchurian western” (bringing back a genre popular in South Korea in the 1960s and 70s), an “Oriental western” or, as Kim prefers, a “kimchee western,” referring to traditional Korean pickled dishes.

In the 1930s, anarchy reigns in the desert of Manchuria, occupied by the Japanese. Meanwhile, three Korean men — strangers on a train — find that their destinies intertwine. The “Good,” Do-won (Jung Woo-sung from “A Moment to Remember”), is an experienced bounty hunter looking to catch wanted men for the rewards. He’s doggedly trailing the “Bad,” Chang-yi (Lee Byung-hun from “A Bittersweet Life”), the cold-hearted gang leader who always has to be number one. The Bad goes in hot pursuit of the “Weird,” Tae-goo (Song Kang-ho from “The Host” and “Memories of Murder”), a mad but lucky thief who inadvertently finds a legendary treasure map while robbing the train. And so begins the epic, wild quest for riches across the Manchurian landscape.

Unlike most spaghetti westerns known for their low cost, the  million budget of “The Good, the Bad and the Ugly” was then relatively high. Likewise, Kim’s production benefited from a million budget, the largest in South Korean history (though still rather low by Hollywood action flick standards). The gamble succeeded when “The Good, the Bad, the Weird” cleaned up at the South Korean box office. It also made the international film festival rounds — including Cannes, Toronto, Telluride, London, Mar del Plata and Chicago — winning the audience award at the 2008 Fantastic Fest in Austin, Texas. 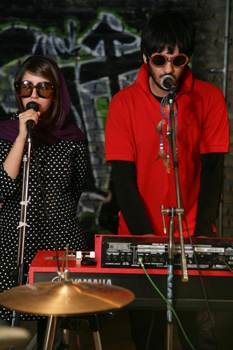 Negar Shaghaghi and Ashkan Koshanejad, an Iranian rock duo known as Take It Easy Hospital, more or less play themselves in the documentary-drama “No One Knows About Persian Cats.”

Award-winning Kurdish-Iranian writer-director Bahman Ghobadi’s previous features — “Turtles Can Fly,” “A Time for Drunken Horses,” “Marooned in Iraq” and “Half Moon” — have been set in his native region of Kurdistan. He departed for Tehran to film “No One Knows About Persian Cats,” a guerrilla production shot secretly in 17 days with a portable digital camera. Though rough-edged, the semi-improvised documentary-drama hybrid serves as a revealing urban tour of the city’s underground music scene, harshly prohibited by the Iranian authorities.

Negar Shaghaghi and Ashkan Koshanejad, an actual indie rock duo known as Take It Easy Hospital, more or less play themselves in the film. After being released from prison, the characters Negar and Ashkan seek band mates for a London gig, as well as fake travel documents and a safe venue for a secret farewell concert in Tehran. Their quest around town to make all this happen is facilitated by the verbose Nader (Hamed Behdad), a well-connected fixer who hatches slick schemes while evading the police. In real life, Shaghaghi and Koshanejad were granted political asylum by Britain and now live in London. In Iran, prison is a risk faced not just by musicians but also by writers and filmmakers.

Ghobadi’s co-writer (and fiancée) Roxana Saberi, an American-born journalist of Iranian and Japanese heritage, was arrested in January 2009, and later convicted of espionage. After international pressure, she was released on May 11, 2009 — just before the film’s premiere at Cannes, where it won the Special Jury Prize and Un Certain Regard. She now lives in North Dakota. Likewise, Ghobadi himself risked arrest making this film. He now resides in Berlin, but when he went to visit his mother in Iran, he was jailed for a week beginning June 2, 2009.

A series of other arrests followed with June’s disputed presidential election, as subsequent protests led to harsh crackdowns by the Iranian government. On March 1, 2010, the film’s assistant director, Mehdi Pourmoussa, was arrested along with including directors Mohammad Rasoulof and Jafar Panahi (who had also previously been arrested in 2009). Pourmoussa and Rasoulof were released a few weeks later, but Panahi remains imprisoned for what Iran’s culture minister vaguely referred to as “making a film against the regime, and it was about the events that followed election.”

American documentary writer-director-producer Alex Gibney made his name recounting accounting fraud in “Enron: The Smartest Guys in the Room” and investigating the U.S. military’s abuse of prisoners in the Oscar-winning “Taxi to the Dark Side.” Gibney blends his familiar subject areas of financial scams, politics and biography with “Casino Jack and the United States of Money,” which presents the tale of disgraced former Washington super-lobbyist Jack Abramoff in a parable about the corrupting influence of money on electoral politics and democracy.

After college, Abramoff’s service as national chairman of the College Republicans sparked his climb up the rungs of the Republican Party. His growing access to GOP leaders fueled his rising career in influence peddling, which eventually included illicit activities. His political reach developed into a seedy global web of Angolan freedom fighters, a Miami mob hit of a Greek tycoon, Russian spies, Native American casinos, Chinese sweatshops, Saipan streetwalkers and international drug corporations. In 2006, Abramoff pled guilty to charges of fraud and conspiracy to bribe government officials, receiving a five-year sentence. That put an end to his reign as one of the most powerful lobbyists inside the Beltway.

Gibney skillfully mixes up generally insightful anecdotes with punctuating, entertaining clips from political movies like “Mr. Smith Goes to Washington.” But his overuse of narration reduces the cinematic feel, seeming more like public television. Perhaps that was unavoidable, to some degree, because the U.S. Justice Department did not permit him to film many hours of interviews with Abramoff in prison. Gibney gets credit though for exhaustively surveying the details of Abramoff’s rise and fall, but all the threads are a bit hard to follow as the viewer goes on information overload.

Kids World Festival The Kids World Festival, now in its second year (May 14-23), is targeted at 4- to 12-year-olds and aims to “introduce international children’s films to Washingtonians, compare significant cross-cultural differences in this genre, and inspire the artistic development of D.C. children through the discovery of quality foreign films,” according to the Alliance Française de Washington.

American Film Institute (AFI) Silver Theatre In addition to Filmfest DC, “Elia Kazan: A Centennial Retrospective” opens April 3, continuing into May. Other continuing series include “The Films of Federico Fellini” and “Larger Than Life: Orson Welles” — both through April 15. (301) 495-6700, www.afi.com/silver

“Berlinale Favorites” at Goethe-Institut “Berlinale Favorites: Sixty Years of Outstanding Film” (May 10-July 12) showcases the top seven must-see films from the history of the Berlin International Film Festival, as selected by its creative director and manager, Dieter Kosslick, at the request of the Goethe-Institut in Washington. (202) 289-1200, www.goethe.de/washington

National Gallery of Art Programmed in conjunction with the Polish Cultural Institute and the Embassy of Poland, the “Moving Compositions: Aspects of Chopin” series (May 9-29) honors the bicentennial of the birth of the iconic Polish composer. “Still Voices, Inner Lives: The Journals of Alain Cavalier” (through May 30) focuses on the diary, a favored topic of the French auteur. And “Catalunya: Poetry of Place” (through June 13), presented in collaboration with Filmoteca de Catalunya, displays fine selections of Catalan cinema. (202) 842-6799, www.nga.gov/programs/film