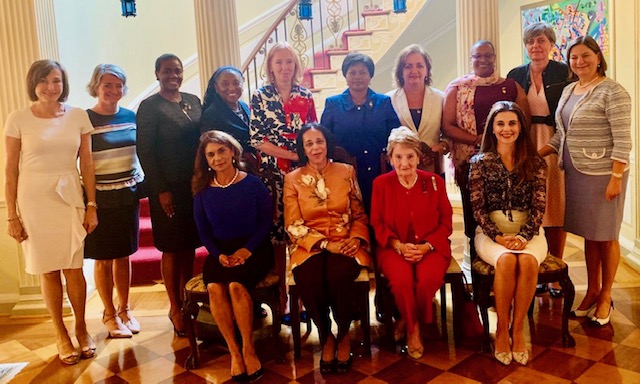 A record 28 diplomatic missions in Washington, D.C., are now headed by women — up from 16 only three years ago. Though the former Honduran ambassador, Maria Dolores Agüero, was replaced by Luís Fernando Suazo Barahona, women are still making diplomatic strides as envoys. Some are microstates such as St. Kitts-Nevis (population: 52,000); others are economic powerhouses like Germany, Mexico and the United Kingdom.

These days, women ambassadors hail not only from Scandinavian nations, which is nothing new, but also from Arab ones. In fact, women now run the D.C. embassies of nine Muslim-majority nations including Afghanistan, Jordan, Libya, Morocco and Saudi Arabia.

And for the last three years or so, an informal club exists for these sisters-in-diplomacy: the Washington Women’s Power Group. The group is so low-profile, it doesn’t even have a website. Yet two of its members, Germany’s Emily Haber and Saudi Arabia’s Reema bint Bandar al-Saud, appear in Washingtonian magazine’s latest ranking of the D.C. area’s 150 most powerful women.

Coordinated by Vlora Çitaku, Kosovo’s long-serving ambassador here, the power group offers mutual support for female ambassadors, a clearinghouse for useful information and an outlet for cultural and social networking.

“It’s much easier to approach senior administration officials and members of Congress when you talk to them as a group,” she said. “We’ve had many top dignitaries come and spend a considerable amount of time with us. This year, the coronavirus has made it all virtual.”

Çitaku dismissed the idea that representing Kosovo — which is recognized by only 98 of the United Nations’ 193 member states — somehow puts her at a disadvantage among her peers.

“We’re all equals here,” said the former human rights activist, who’s been the voice of her landlocked Balkan country in Washington since 2015. “We’re an inclusive group and we share our contacts if necessary. But we also rely on one another whenever we need it.”

From lavish luncheons to Zoom chats

The group also organizes memorable events, such as a September 2019 luncheon to honor former U.S. Secretary of State Madeline Albright. That gathering took place in September 2019 at the residence of Oman’s ambassador, Hunaina al-Mughairy, who’s now leaving her post after 15 years in Washington.

More recently, this past August, Çitaku and Maguy Maccario Doyle, Monaco’s ambassador here, co-hosted an hour-long livestreamed chat with Kelley E. Currie, U.S. ambassador-at-large for global women’s issues. Among other things, Currie said the $122 million Women’s Global Development and Prosperity Initiative has “increasingly strong bipartisan support” in Congress, and that it will remain a priority “regardless of who is in the White House.”

On Aug. 30, the group attended a virtual book launch by Enric Sala, National Geographic’s acclaimed explorer-in-residence, and founder of the ambitious Pristine Seas project. Sala’s latest book, “The Nature of Nature: Why We Need the Wild,” has gotten rave reviews from Monaco’s Prince Albert II, among other dignitaries.

Maccario, who’s represented Monaco here since 2013, said that in the face of enormous upheavals to her traditional role caused by the pandemic, the women’s power group has been enormously useful.

“Since arriving in Washington, I’ve received gracious support and advice from all the lady ambassadors,” said Maccario. “This year, though, in the age of COVID-19, we have more time to really get to know each other — socially distant, of course. Before, when we would see each other at business and social events, we were lucky to chat for a few minutes. Now we have much more time to collaborate, talk and connect on a higher level.”

“Given that only a small number of ambassadors here are female, this group is a wonderful initiative and I applaud Kosovo’s ambassador, Vlora Çitaku, for spearheading it,” said Marks. “It not only provides a forum for female ambassadors to support each other, but also serves as an avenue for us to share our perspectives, initiatives and ideas on how we can improve the lives of our people — and indeed that of the global community — through foreign policy.”

Besides Jamaica, several other Latin American and Caribbean nations already have women representing them here as ambassadors, including Ecuador, Mexico, St. Kitts-Nevis, Suriname, and St. Vincent and the Grenadines. Joining them before year’s end will be Lianys Torres Rivera — the first woman ever to head Cuba’s mission in the United States.

And when she does, she’ll get the same red-carpet treatment all new female envoys do.

“As soon as they arrive, we get notified by State Department protocol, the same way we get notified when any ambassador gets accredited and presents credentials to the president,” Çitaku said. “Immediately, one of us reaches out, we meet, and I add them to our group.”

She added: “We also work with our male ambassadors, of course, but since Washington is a very big capital, most of the ambassadors tend to gravitate toward and socialize with ambassadors who come from their region of the world.”

All this has been a huge help to Roya Rahmani, who is the first woman to serve as ambassador here from Afghanistan — a country not traditionally known for gender equality.

“Diplomacy is still pretty much male-dominated. For many women ambassadors who come to Washington, they are the first from their country,” said Rahmani, who, like Çitaku, grew up during a war and spent much of her childhood as a refugee in neighboring Pakistan.

Upon her return to Kabul in 1998, Rahmani famously refused to leave the house rather than wear a burqa as the Taliban required. She’s since devoted most of her career to women’s rights and educational issues.

“The power group serves as an excellent reference point, and also a resource where we can share information and clarify whether something we hear is true or not,” Rahmani said. “On a very personal level, in these difficult times it’s a place we can easily and comfortably reach out to others who are experiencing the same thing.”

The Afghan envoy added that COVID-19 has completely altered her job description, with face-to-face meetings completely replaced by Zoom chats and phone calls.

On the other hand, she said, “women ambassadors are uniquely equipped to deal with this rapidly changing environment, given their innate ability to multitask and look at issues holistically. Women are innovating and finding new ways to define and exercise diplomacy. Being a woman ambassador in D.C. right now means working hard to make your mark, despite the changing and difficult circumstances.”

Despite crises, hope for the future

Formerly executive vice-president and now a senior fellow at the Center for European Policy Analysis — a nonprofit think tank that counters Kremlin disinformation — Szemerkényi is considered a top expert in energy issues and the politics of Central and Eastern Europe.

Over the years, she said, Washington has seen a steady increase in the number of “fantastically talented and truly inspiring women” — not only as ambassadors but also in other walks of life from business and politics to defense and law.

Yet, as Szemerkenyi pointed out, even though President Trump nominated “highly professional, able and successful women leaders to several top and very visible positions,” after four years in office he’s lost substantial support among women voters.

“The key message of this may be an indicator that the process has gone deeper. It is no longer just about gestures,” she said. “Nominations are still very important and necessary, but it’s not enough anymore. They have to go hand-in-hand with public and private positions, and the solid stance of equality and respect. This is the special role women leaders and diplomats have in Washington these days.”

In other news, Honduras has a new envoy to the United States. Luís Fernando Suazo Barahona presented his White House credentials on Sept. 17 as ambassador. He replaces his predecessor, Maria Dolores Agüero Lara, who has been appointed Honduran envoy to Spain.

Previously, Suazo was general coordinator of the government, with the rank of minister for prevention, security and defense. During this time, Honduras has reduced its homicide rate from 86.5 per 100,000 inhabitants in 2012 — among the world’s highest — to around 37 per 100,000 this year. Among Suazo’s responsibilities were reform of the national penitentiary system, fighting gang violence, boosting security in urban transportation and leading anti-narcotics efforts.

A native of Tegucigalpa, the capital, Suazo says he hopes to reduce illegal immigration to the United States; at present, some one million undocumented Honduran citizens are living here.

“My first objective will be to create economic opportunities in Honduras by promoting investments and other programs that normalize immigration for people working in agriculture,” Suazo told us. “We have opportunities with the Development Finance Corp. (formerly OPIC), which works with the private sector in other countries. We also want to strengthen our efforts to combat narcotrafficking by creating combined strategies between our countries.”

Since 2016, Suazo had also served as vice-minister of security for inter-institutional affairs, responsible for promoting security plans in Honduran municipalities as well as producing national homicide data via a transparent process.

Suazo, 53, is a lawyer by profession, and has a master’s degree in business administration from INCAE — a Honduran business school — as well as a certificate in senior project management obtained in Sweden. He’s married and has two children.

By the way, this isn’t the new ambassador’s first time in town; from 2010 to 2013, he was the Honduran Embassy’s deputy chief of mission. But things are certainly different now.

“For sure, this is not the same Washington that I left in 2013,” he said. “It’s very polarized and difficult to make decisions. Sometimes you find the State Department taking positions that are not the same as the White House. But otherwise, I’m very happy to be back here.”