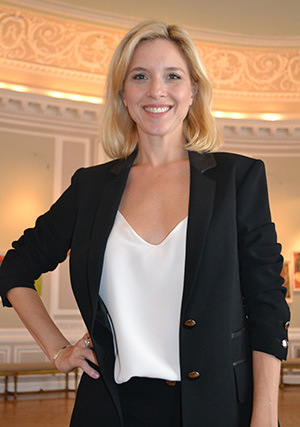 Carla Peterson, wife of the Argentine ambassador, is an acclaimed television and theater actress with dozens of credits to her name.

As the wife of a first-time ambassador, Carla Peterson may be new to diplomacy, but she’s got the chops to at least act the part. The striking blonde is not a household name in Washington, D.C., but back home in Argentina, she’s often recognized on the street — and not just because of her looks.

Peterson is an acclaimed television and theater actress with dozens of credits to her name. She has won numerous awards for her work, including “Lalola,” a highly popular Argentine comedy show that played in 50 countries, among them Russia, India, Turkey and Brazil. She first appeared on television in the 1992 telenovela “Dance Party,” followed by a string of acting gigs, including an appearance on Polish television in the TV4 broadcast of the soap opera “Enamorarte (Young Lovers),” in which she played a single mother bringing up her son.

The 42-year-old — who could easily pass for her 20s — also performs in the Buenos Aires Shakespeare Festival, regularly makes full-length films and squeezes in time for commercials.

Her husband, Martín Lousteau, is also well known, though his fame lies in political circles. The 45-year-old ambassador has held various cabinet positions, including minister of economy and production, and he was chairman of Banco de la Provincia de Buenos Aires and Grupo Bapro SA. He has also been a newspaper columnist for “La Nación,” the author of four books, a consultant specializing in macroeconomics, a professor and a mayoral candidate. In October 2013, Lousteau was elected to Parliament representing the city of Buenos Aires. In 2015, he ran for mayor, receiving 48.4 percent of the votes.

In Argentina, the power couple is often featured in magazines and newspapers. Here, their lifestyle is more subdued as they focus on his diplomatic posting and raising their 4-year-old son, Gaspar.

“For Gasper, it is so normal to see our faces on TV. When he sees me there, he says, ‘Mommy is working,'” Peterson told us. “In the beginning, Gaspar looked just like his father, everything was the same except for the curls,” she added, noting her husband’s signature curly hair. “Now, Gaspar is getting curls.”

But she doesn’t necessarily want her son to follow in his father’s political footsteps. “Oh, no! I want him to have more fun [than that] and travel a lot.”

While Peterson is prominent in Argentina, she wants to maintain a low-profile in D.C. “I try not to go [to events], but I go when my husband really needs me. I choose a little more than other spouses because I want to spend time with Gaspar. At home in Argentina, in the theater I worked every night,” she said. “Living in another country, it is a very good time for me because I don’t have to go to work every day or night.”

While in Washington, she is continuing her theater studies at the Washington School of Performing Arts and taking various dance classes at the Joy of Motion Dance Center.

She also occasionally travels back to Argentina to star on camera. “I returned to Argentina to do two movies and a commercial. It sounds like a lot but it doesn’t take me a long time. I also presented one of my movies at film festivals in Fort Lauderdale and Miami,” she said, noting that she’ll be attending the Cannes Film Festival this year.

“I always knew I wanted to be an actor,” Peterson said. “But my mother said I had to study ‘serious’ things…. I loved movies, dancing and playing.

“My father was in the Air Force. I started doing some theater. My father wanted me to go to university and be a doctor or a lawyer. He didn’t know how to guide me. I grew a lot. I took dance in New York, Broadway tap dancing. Miguel Guerberof, the director, has guided me.”

Guerberof often directs her in Shakespeare productions. She has also toured Germany with Guerberof for a Shakespeare festival and taken a Samuel Beckett play to Milan. 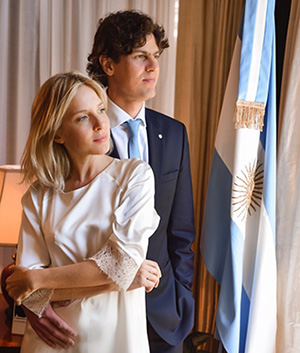 Peterson says the life of an actress can appear glamorous, but it also involves a good deal of work.

“Learning lines is still the most difficult,” she explained. “I have so little private time. I often go out to a studio or a bar where I can be alone. For me the lines of classical theater like Shakespeare are easier; contemporary theater is harder. I always learn in Spanish. If I have to speak a foreign language — like French, German or Italian — I learn my lines phonetically.”

She also said times have changed backstage. “Hardly anyone asks for my autograph anymore,” she said with wry amusement. “They just want a selfie!”

Peterson is proud that Buenos Aires has a thriving theater culture. “We have 400 theaters, including 235 salons like your off-Broadway productions. Argentina ranks the first in Latin America with the number of theaters and right under New York and Paris internationally. Our cheapest tickets are $20 for the salons and $200 for the most expensive seats.”

Argentina’s capital also boasts a legendary social scene. “We have good restaurants and nightlife,” Peterson said, noting that many Argentines eat dinner at 10 p.m. or later. “There are lots of special places to go for tango…. People are out every night until three to four in the morning [dancing tango],” she told us, noting that the embassy in D.C. regularly offers tango classes.

“We are not just theater and tango,” she added. “We have three new Nobel Prize recipients and are known for our technical advances, top scientists and biologists. In the Northeast, we have famous falls that are one of the ‘new seven wonders of nature,'” she said, referring to the Iguazu waterfalls that Argentina shares with Brazil, whose narrow chasm is nicknamed “The Devil’s Throat.”

In addition to its natural beauty and booming tech sector, the South American nation of 43.4 million is known for its diversity. Peterson said Argentina is a country of immigrants. (Argentines usually refer to themselves as a “crisol de razas,” or “crucible of races.”)

“We are friendly people because of that. There is very little discrimination. We have many places that are stuck in time, others that are very modern. Many of us have family who live all over the world. And many Argentines live around the world.”

The globe-trotting actress could easily fit into that category, though this down-to-earth mother takes fame and diplomacy in stride. As she wrapped up our interview with a quick pose for the camera, she continued to tout her beloved homeland. “There is only one hour or two hours difference in time zones with America,” she said, encouraging Americans to visit Argentina. “Another good thing: You will have no jet lag!”