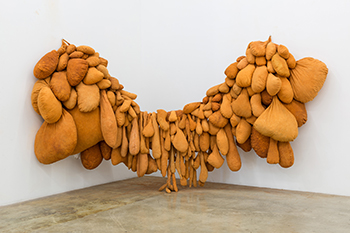 For centuries, male artists have gazed upon women and shaped their image through paint, bronze or stone. Women were assigned roles as seductive muses, faithful wives, beautiful goddesses or forlorn lovers, but their identity was always defined by men until modern times.

The National Museum of Women in the Arts flips that patriarchal switch in a compelling new exhibition called “NO MAN’S LAND: Women Artists from the Rubell Family Collection,” on view until Jan. 8. Featuring artwork by 37 female contemporary artists from 16 countries, the show explores the art-making process and different interpretations of the female body, ranging from sensual to political to absurd.

The exhibition is a smaller version of a show that opened last year at the Rubell Family Collection museum in Miami. Mera and Donald Rubell, who own a chain of hotels including the Capitol Skyline Hotel in Washington, D.C., have collected art since the 1960s and have assembled one of the largest private contemporary art collections in the world.

“There’s something in the way in which a woman presents her nakedness than how a man presents a woman,” Mera Rubell told the Diplomat. “Forever the woman has been the subject of fascination by painters. She has been gazed at, but now she is both the artist and subject of the gaze.” 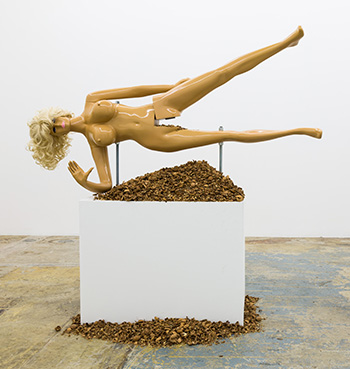 Curators from the National Museum of Women in the Arts had the formidable task of pruning the original exhibition, which spilled across 45,000 square feet of galleries in the Miami museum, to 7,000 square feet to fit their downtown D.C. location. They also had to make sense of a vast body of artwork with little connection other than the gender of the artists. While the exhibition features stellar work, the two competing themes about the female body and the art-making process don’t really fit together, and the exhibition sometimes feels like two different shows sandwiched together with little connecting the halves.

Several artists use female mannequins to challenge the impossible societal standards for female beauty and the corrupting influence of capitalism. German artist Isa Genzken draws surgical lines on a mannequin’s stomach and adds some ceramic birds on its shoulders, reminiscent of Snow White and other fairy tales where a maiden must suffer until being saved by a prince. The piece is called “Schauspieler,” meaning “actor” in German, with many women acting out confining roles because of misogyny or their own perceptions of womanhood. 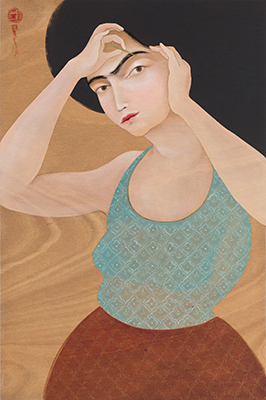 The most provocative (and funniest) piece in the exhibition was created by the Rubells’ daughter, Jennifer Rubell, who is known for performance art focused on food. Inspired by a gag Hillary Clinton nutcracker, a nude female mannequin with absurdly large breasts and flowing blonde hair is suspended on its side with a vagina that is a working nutcracker. Viewers can pick a walnut from a bowl, pull the mannequin’s top leg down and hear a startling crack in a quiet gallery before eating the walnuts. Called “Lysa III,” the piece could offer alternative interpretations of the power of a woman’s sexuality that scares some men or a society where a woman’s talents are reduced to a sole function contained between her legs.

In “Migrant. I,” Iraqi artist Hayv Kahraman creates a haunting oil painting about the travails of migrants forced from their homes into a world that often doesn’t want them. The work is especially timely now with the wave of migrants and xenophobic discrimination spreading across Europe and the build-a-wall sentiment expressed by presidential candidate Donald Trump and his ardent followers. Resembling a playing card, two intertwining torsos represent Kahraman, who fled from battlefields in Iraq to Sweden with a falsified passport. One torso extends upward while another faces down. One woman has her eyes closed while the other is blindfolded, and they both have nooses tied around their necks. The powerful piece shares some poignant grief about a migrant’s past, uncertainty about the future and how the vagaries of luck carry too much weight in determining who lives or dies. If you’re still upset that you don’t have a new iPhone 7 after viewing this heartfelt work, then there’s something wrong with you.

Mickalene Thomas’s “Whatever You Want”

Mickalene Thomas creates a sensual portrait of her partner in “Whatever You Want,” one of the few pieces in the show that revels in female sexuality. The acrylic painting, accented with rhinestones, features a black woman with a large Afro. Her blouse is open, exposing one breast, and her bold gaze is inviting or challenging, depending on the reactions of the viewer.

The other half of the exhibition concentrates on the physical process of art-making, often with unusual materials or work that blurs the lines between fine art and craft, a distinction that has really lost any meaning in recent years. Solange Pessoa’s “Hammock” features large fabric bags stretching toward the floor in an amorphous mass. In “Life Serves Up the Occasional Pink Unicorn,” South Korean artist Anicka Yi has created a wall-size installation of tempura-fried flowers coated in resin mounted on Plexiglass in front of chrome-plated dumbbells, contrasting feminine and masculine associations.

While the process-related artwork is commendable, it doesn’t mesh well with the more confrontational work about the female body. A more effective pairing may have been with political or protest art. Since the original exhibition featured artwork stretching from the 1960s to the present, that’s a fascinating opportunity to explore how female artists have tackled the issues of the day beyond the female body. The next stop of the traveling exhibition hasn’t been announced yet, but curators at each venue can shape their own personalized versions from the massive collection in the Miami exhibition. That’s a welcome plus for different audiences across the country.

NO MAN’S LAND: Women Artists from the Rubell Family Collection