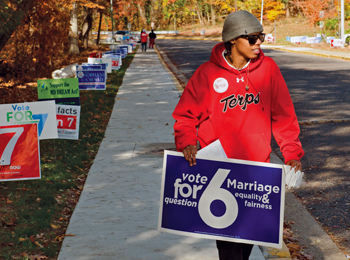 At the recently concluded AFI Docs presented by Audi, the Audience Award for Best Feature was presented to director Yoruba Richen’s “The New Black,” an insightful documentary exploring the divide over gay marriage among black voters, including its entrenched opposition by African American churchgoers. The Audience Award for Best Short went to director Joshua Izenberg for “Slomo,” a fresh look at doctor John Kitchin’s leisurely but fulfilling life rollerblading on the beach after giving up his successful but hectic medical practice.

“While this was a transformational year for the festival with an expanded footprint into the heart of Washington, D.C., at our core remains a commitment to celebrating the best in the documentary form. The tremendous enthusiasm and response to the film program and its related panels surpassed even our highest expectations,” said Sky Sitney, AFI Docs director.

The AFI Docs film festival, previously thriving as Silverdocs for 10 years, completed a successful first year under its new name, which marks the film fest’s expansion beyond Silver Spring, Md., and the American Film Institute’s foray back into D.C., where its 1965 founding was initially announced in the White House Rose Garden.

This year also marked the debut of the Public Policy Engagement Program, which provided forums for more than 52 filmmakers to engage with Obama administration officials and congressional policymakers in a “film and politics boot camp” that explored topics such as education, immigration, intellectual property and the role of humor in politics.