Home The Washington Diplomat August 2013 The Burning of Visibility: From Reality to Dream 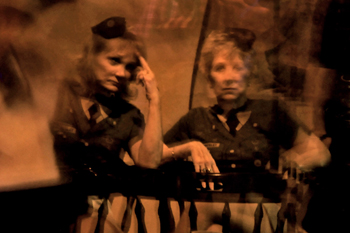 “Mythology,” is part of a series of images by French-born photographer Anne-Lise Large that reflect on American culture.

French-born photographer Anne-Lise Large offers her perspective on American culture in “The Burning of Visibility: From Reality to Dream” at the Art Museum of the Americas F Street Gallery.

The exhibit consists of “Lost Angels,” “Mythology” and “Margins,” a series of several dozen pictures shot between 2009 and 2012. Large has resided in the United States for the past four years and offers an outsider’s take on a rapidly changing society.

In “Lost Angels,” Large portrays lonely, seemingly lost girls. The images are blurred and unfocused and suggestive of Gerhard Richter’s style of fragmented reality. The lack of sharpness renders the girls strangely dreamy in a helpless, pitiable sort of way.

Dreams form the backbone of the exhibit. Large crisscrossed the country — from New York to Los Angeles, San Francisco to Las Vegas, and New Orleans to D.C. — to depict “the underbelly of our nation of dreamers, those struggling to obtain the promise we all hope to achieve,” according to wall text.

What exactly they hope to achieve is left to the viewer’s imagination. The images in “Lost” are hazy, both in appearance and interpretation. In one, a girl clad in a nightdress stands before an open window and balances a white dove on her wrist. In another, a dark celestial scene is illuminated only by a full moon high in the sky and reflected on the back of a girl.

In “Mythology,” which Large says captures the metamorphous of individuals as they transform into character, we see portraits of women wearing blank expressions like masks hiding their true intentions and identities. Large’s signature blurring both distorts and amplifies the focus of the frame, as viewers try to get a bead on the person in the shaky picture.

Diffuse photographs paired with writing comprise “Margins,” which blends abstraction and realism while highlighting the influence of our surroundings. Individual words are discernible but not sentences. Two ballerinas in red, their hair piled high, stand by a wall in one scene, while another depicts the bearded, elongated, barely visible face of a man against a yellow parchment background.

Large currently lives in Washington, D.C., where she is a professor of philosophy and photography at the French International School. She’s also participated in various conferences and workshops to discuss the correlation between photography and philosophy — a correlation that clearly informs her body of work.

The Burning of Visibility: From Reality to Dream