Home The Washington Diplomat April 2017 After U.S. Withdrawal from Trans-Pacific Partnership, Now What? 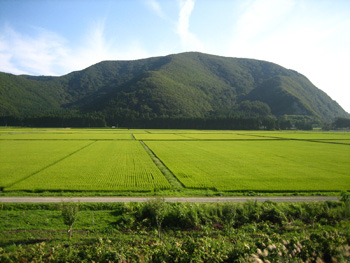 On Jan. 24, President Donald Trump made good on a campaign promise to withdraw the United States from the Trans-Pacific Partnership (TPP) by signing an executive action to end U.S. involvement in the trade deal.

The sweeping accord included 12 Pacific-Rim nations, among them Canada, Mexico, Japan and Australia, that together represented around 40 percent of the global economy and a third of world trade. Where will TPP go without U.S. involvement?

A rice paddy is seen in Japan’s Fukushima Prefecture. The Trans-Pacific Partnership (TPP) was expected to open up Japan’s jealously guarded agricultural sector to American exporters, but President Trump kept his campaign promise and dropped out of the trade accord in January.

Although Japan has already ratified the agreement, the momentum for ratification by all parties is gone without the U.S. pushing for it, Goto told The Diplomat in a phone interview.

Pieces of the deal may be salvaged, however. There are elements of TPP that would still be beneficial to the U.S. and the 11 countries involved in negotiations, such as provisions cutting red tape for cross-border trade, Goto said.

In TPP’s wake, there is also increased focus on Trump’s avowed preference for bilateral trade deals over multinational pacts.

One bilateral deal that is possible in the near future is a U.S.-Japan agreement. (Vietnam, too, is reportedly looking into a bilateral pact with the U.S. to replace TPP.)

While the first meeting between Trump and Japanese Prime Minister Shinzo Abe appeared to go well, “there hasn’t been any indication of a free trade agreement coming out of [the meeting],” said Goto.

But Trump’s first formal meeting with Abe — which started at the White House and ended with a weekend at Trump’s Mar-a-Lago estate in Palm Beach, Fla. — did establish a good working relationship.

“The relationship on a personal level seems to be off on a good footing,” Goto said.

The negotiations with Japan over its inclusion into the TPP were some of the most arduous, given Japan’s notoriously high protectionist tariff barriers, particularly for its agriculture and automotive sectors. As such, U.S. and Japanese negotiators may already have the fundamentals in place to pursue a bilateral accord (the U.S. and Japan alone accounted for over 75 percent of the GDP of TPP member states).

At the same time, Japan made concessions in TPP talks that it would never make in a bilateral deal, according to Robert A. Manning, a senior fellow at the Atlantic Council who previously served on the U.S. secretary of state’s policy planning staff during the George W. Bush administration.

Some have speculated that Japan might even pick up the TPP mantle, even though Abe called the pact “meaningless” without the U.S. on board. Nevertheless, the TPP could inject much-needed vitality into Japan’s stagnant economy while countering Chinese influence.

“Most importantly, cutting through the myriad of red tape in agriculture and elsewhere is a critical part of the economic program he has proudly dubbed ‘Abenomics,’” wrote William Sposato on Jan. 6 in Foreign Policy.

Despite some successes in boosting economic growth, “The program, built around easy money from the central bank, a heavy dollop of government spending, and attempts at structural reform, has been less successful than hoped,” Sposato wrote. “TPP gives the government the handy excuse it now needs to take unpopular reform measures meant to give a new push to the Abenomics program.”

Other TPP nations such as Australia and Singapore haven’t completely given up on the hard-fought deal, which took over a decade to hammer out and would’ve struck down some 18,000 tariffs. There is hope that it can somehow be salvaged, with or without the United States. “Our preference was to have the U.S. involved in the TPP,” New Zealand Trade Minister Todd McClay told Bloomberg on Jan. 23. “However, the agreement still has value as an FTA with the other countries involved.”

In fact, Chile convened a meeting of TPP trade ministers, along with China and South Korea, in mid-March to discuss prospects for moving forward. “They will discuss the possibility of concluding TPP among themselves and perhaps inviting others to join as well,” Wendy Cutler, vice president of the Asia Society Policy Institute, wrote in an Asia Society brief ahead of the meeting. “It would be difficult, but it is worth consideration.”

Cutler, a former negotiator in the Office of the U.S. Trade Representative, added that a TPP agreement is still relevant without the U.S. “You’d still have four of the world’s 20 largest economies — Japan, Canada, Australia and Mexico — alongside significant emerging economies, like Vietnam and Malaysia,” she wrote, noting that, “There’s room for Asian countries to unilaterally implement the economic reforms called for on TPP.”

The Port of Shanghai’s deep-water harbor on Yangshan Island in China became the world’s busiest container port in 2010. Given its economic heft, smaller Asian nations such as Vietnam and Malaysia may have little choice but to follow China’s lead as it pushes its own regional trade pact as an alternative to the defunct Trans-Pacific Partnership.

Some experts, rather optimistically, have even floated the possibility that Trump could resurrect the deal despite its toxicity among many American voters.

“I wouldn’t be at all surprised if Trump came back to TPP after the 2018 elections,” Manning told The Diplomat.

Manning, along with Olin Wethington, co-wrote a June 2015 Atlantic Council report, “Shaping the Asia-Pacific Future: Strengthening the Institutional Architecture for an Open, Rules-Based Economic Order,” that argued in favor of ratifying TPP in part to “integrate” China “into the existing order.”

While China did not join TPP negotiations, the deal would have established regional norms that China would eventually have been expected to meet, Manning and Wethington argued.

Indeed, TPP was more than a trade agreement. It was also a geopolitical tool that, in the words of Manning’s report, incentivized others in the region to “follow our rules,” such as protecting intellectual property rights and allowing the free movement of goods, capital and services.

But the TPP notably did not include China, though the door was open for it to join in the future. In its absence, many U.S. policy experts viewed the trade deal as a way of counterbalancing China’s growing military and economic clout in the region — an implicit goal of President Obama’s Asia pivot to refocus American attention and resources away from trouble spots like the Middle East and toward Asia. The goal was to re-establish America as a Pacific power, although Beijing argued that the pivot was a thinly veiled attempt to contain its rise in the region.

While Trump — and his Democratic opponent, Hillary Clinton — pledged to scrap the trade deal, which was hugely unpopular with American blue-collar workers, experts say walking away from the trade pact has cost the U.S. critical leverage in the Asia-Pacific, one of the world’s fastest-growing markets that is home to 60 percent of the global economy.

The decision to abandon the TPP allows China to cement its hegemony in the region and pursue its own competing trade pact, the Regional Comprehensive Economic Partnership (RCEP), which lacks the high labor, intellectual property and environmental protections enshrined in the TPP. While China could, in theory, enter into talks to join the TPP, it has little motivation to do so because RCEP requires far fewer sacrifices on its part.

Because of this, U.S. withdrawal from TPP is “a strategic failure of U.S. policy in the region,” argues Bonnie Glaser, a senior adviser for Asia and director of the China Power Project at the Center for Strategic and International Studies.

“It’s impossible to underestimate the impact of the U.S. withdrawal from TPP on politics in Asia” or on U.S. credibility and staying power in the region, Glaser told The Diplomat.

“Having the same standards and rules for all participating countries reduces confusion and encourages businesses, especially [small- and medium-size enterprises], to take advantage of the benefits of these agreements,” the report said. 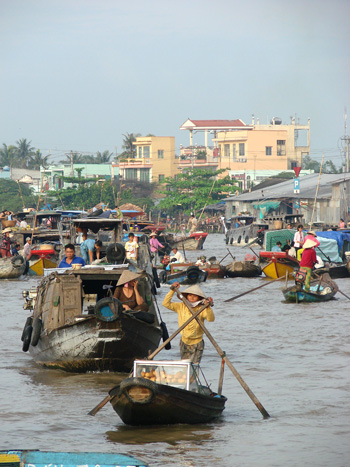 A floating market is seen in Vietnam’s Mekong Delta. Vietnam has reportedly expressed interest in a bilateral trade pact with the U.S. now that President Trump has backed out of the Trans-Pacific Partnership.

In the meantime, as Trump tries to start any bilateral talks, the U.S. may be marginalized by other agreements, such as the one China recently negotiated with Vietnam to manage their maritime territorial dispute — which may lead to further collaboration as Vietnam seeks foreign investment in infrastructure.

Given its economic heft, smaller Asian nations such as Vietnam and Malaysia may have little choice but to follow China’s lead in America’s absence. China is also looking to replace the U.S. as the standard-bearer of free trade, with Chinese President Xi Jinping touting globalization’s benefits at the World Economic Forum earlier this year, and Beijing looking to boost trade with partners such as the European Union.

The TPP was an obvious, and inextricable, centerpiece of Obama’s pivot, and it’s unclear what economic overtures, if any, Trump will make to the region.

For now, however, a greater security concern is stealing the attention of officials in Washington, Tokyo, Beijing and elsewhere: North Korea’s increasingly realistic threat to develop a nuclear missile capable of hitting targets in the continental U.S.

There is consensus among all the experts The Diplomat spoke with for this report that North Korea is the “most immediate threat” in the region (also see story: “Are the White House and Defense, Intelligence Establishments at Odds?“).

Manning suggested that North Korea, which he said views itself as a “nuclear state,” is four to five years away from developing an intercontinental ballistic missile of the sort once aimed at Florida during the 1962 Cuban Missile Crisis.

The threat requires a policy review of what has been tried in the past, Manning and Glaser both agreed.

It is worth exploring a cap and freeze on fissile production, Manning noted. He also pointed out that the U.S. has not yet imposed the kind of crippling sanctions that brought Iran to the negotiating table.

In the meantime, he said the U.S. and allies such as South Korea must strengthen their missile defenses.

Emphasizing alliances as the “smart thing to do,” Glaser concurred. And Trump has been doing just that with his public courting of Abe, the first world leader he met after the election, and the deployment of the Terminal High Altitude Area Defense (THAAD) missile defense system in South Korea.

Still, it is hard to imagine that the diplomacy Trump wants — in which China would accept more responsibility for restraining its client state — might be effective or even possible, Glaser said.

The Obama administration was not as successful as it wanted to be in shaping China’s “policy choices,” Glaser argued. “That strategy needs some improvement.”

And yet, Trump could be the one to make Obama’s now-defunct Asia pivot a reality, Josh Rogin argued in a Washington Post column on Jan. 8. Despite the president’s isolationist rhetoric, his top officials, including Secretary of State Rex Tillerson, are said to be “keenly interested in Asia strategy” and enhancing America’s presence in the region, portending Trump’s own pivot.

“Transition officials say the Trump administration will take a hawkish view of China, focus on bolstering regional alliances, have a renewed interest in Taiwan, be skeptical of engagement with North Korea and bolster the U.S. Navy’s fleet presence in the Pacific,” Rogin wrote.

“The most urgent concern has to be North Korea. Everything else is a longer horizon threat,” said Glaser.

North Korea is proving to be the kind of crisis the Asia pivot was designed to avoid. But managing the hermit kingdom will also serve as a test case for how the U.S. under Trump takes a larger role in the region by helping to resolve its conflicts.

Ryan Migeed (@RyanMigeed) is a freelance writer in Washington, D.C.