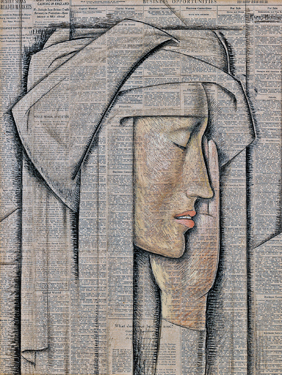 Newspapers served as the inspiration for a wide range of 20th-century artists in both the United States and Europe, as seen in works such as, from clockwise top: Alfredo Ramos Martinez’s “Head of a Nun.”

“Shock of the News,” the all-over-the-place eye candy and brain food of a show at the National Gallery of Art, is what many might consider a near-perfect museum exhibition.

The golden age of newspapers is seen through the prism of collages, paintings, drawings, sculptures, artists’ newspapers, prints and photographs done between 1909 and 2009 by 60 artists from both the United States and Europe. This transatlantic phenomenon literally dissected the news, incorporating, mimicking, undermining, memorializing and rewriting newspapers to suit the artists’ agenda. In that sense, the artists who manipulated the media are not that unlike the muckraking journalists of the past or today’s media moguls who also bend the news to suit their own purposes.

On the one hand, curator Judith Brodie satisfies intellectuals and theorists with the exhibition’s conceptual ideas that connect modern art and modernist thinking to newspapers. “Shock of the News,” with an almost improvisational flair, manages to be a history of 20th-century art and all of its major movements — cubism, futurism, Dada, etc. — while touching on many of the major political, social and cultural convulsions of the past century.

On a more visceral, immediate level, the exhibit hits home for all the news hounds who could not imagine their lives without a steady stream of headlines and breaking updates, and whose hearts ache for the fading dailies of yesterday (with Newsweek being the latest casualty). “Shock of the News” is a vivid reminder of the importance of the very presence of newspapers, for good and ill — how they confirmed and manipulated history, and how they invaded the daily lives of the masses, including several generations of artists who found excitement, disdain, complexity and inspiration in print.

In fact, the exhibition is a veritable all-star parade of modernism and modernist art: Pablo Picasso, Juan Gris, Man Ray, Hannah Höch, Salvador Dalí, Jasper Johns, Robert Rauschenberg and many others, not to mention the works of contemporaries such as the Guerrilla Girls. To one degree or another, all of these artists wadded up newspapers, recreated them, cut them to pieces, used headline fragments, played with them and made them their own. 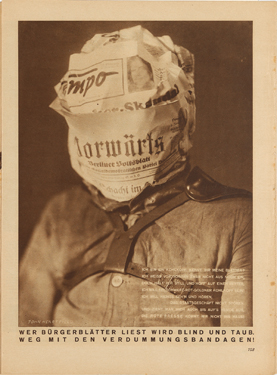 It all started with Picasso — what discussion about modern art doesn’t start with him, after all. His 1912 college “Guitar, Sheet Music, and Glass” included a newspaper fragment and is considered the first self-consciously modern work of art to incorporate newspaper.

But in fact it was F.T. Marinetti, the Italian poet and founder of the futurist movement, who scooped Picasso with his 1909 futurist manifesto printed on the front page of the newspaper Le Figaro.

According to the National Gallery, “While the aims of Marinetti and Picasso were poles apart, their seminal efforts marked the beginning of a trend: Visual artists began to think about the newspaper more broadly — as a means of political critique, a collection of ready-made news to appropriate and manipulate, a source of language and images, a typographical grab bag, and more.”

As trends go in art, this was a hot one, and it has never really abated. Though the art world at the time was already bristling with trends, movements, styles and rebellion, newspapers found their way into many salons and studios, in collages and eventually photographs and paintings — and everything in between.

Willem de Kooning once used newspapers to dry his canvasses, so much so that he incorporated the leftovers into some of his paintings. Dieter Roth’s Literaturwurst (Daily Mirror)” is made of newspaper, water, gelatin and spices wrapped in sausage casing.

But artists did more than use newspaper as material — it was their muse. You want real, meaty content? This exhibition is full of it.

There’s the universal content of politics and protest in works such as Sarah Charlesworth’s “Modern History, April 21, 1978,” which weaves together the front pages of 45 international newspapers to examine how they dealt with the kidnapping (and eventual murder) of Italian Prime Minister Aldo Moro. Hans Richter’s 16-foot-long scroll-like 1943-44 painting “Stalingrad (Victory in the East)” incorporates actual news articles to trace the Battle of Stalingrad from onset to conclusion.

John Heartfield’s 1930 photomontage, reproduced in a Berlin newspaper, shows a man’s head wrapped in a mass-market tabloid — a sly attack on newspapers whose title translates to: “Whoever reads bourgeois newspapers goes blind and deaf. Away with bandages that make you dimwitted!” Of course, today the same charge can be made against the instant age of communications, in which 140-character tweets, vapid blogs, photoshopped imagery, and a constant ticker tape of headlines may not make 21st-century readers deaf and blind, but certainly might give them a bout of attention deficit disorder.

But then there’s also the sheer beauty of newspaper print, as seen in Alfredo Ramos Martinez’s “Head of a Nun,” as well as its — appropriately enough for this display — inherent shock value, something Andy Warhol understood and exploited with wild abandon.

In some ways though, “Shock of the News” could just as easily be called “Malleability of the News” or “Motivational Power of the News,” because it was all those things for astute 20th-century artists on the both sides of the Atlantic.

Shock of the News

through Jan. 27
National Gallery of Art
on the National Mall between 3rd and 9th Streets at Constitution Avenue, NW
For more information, please call (202) 737-4215 or visit www.nga.gov.