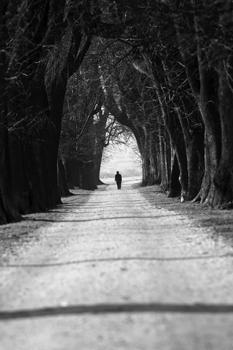 The picture is haunting. It depicts 14 men and women from the early to mid-20th century, all smiling warmly. Some of the women wear classic cat eyeglasses. All the men are in suits and ties. But the photograph has been edited so that all but three of these people appear in dark sepia tones.

All of these 14 people, it seems, are from one family — and all but three of them have died with Alzheimer’s disease.

They include Gary Reiswig’s father, grandfather, great grandfather and great-great grandfather, as well as a sister and brother and seven cousins. Reiswig realized in his teens that his father was beginning to undergo changes that reminded him of his grandfather. Ultimately, his father died at age 57, six years after a diagnosis of Alzheimer’s disease.

In his new book, “The Thousand Mile Stare,” Reiswig traces the impact of early-onset Alzheimer’s on his family, interweaving his own story with the science of the disease. In their 40s, he explains, something changes about many members of his family. “An aunt puts ice trays into the stove instead of the freezer. A normally responsible father assigns a dangerous farm chore to a much-too-young son.” In one tragic incident, Reiswig’s grandfather drove his truck onto a railroad crossing in Texas and was hit by a train. His grandmother died in the crash.

What causes early-onset Alzheimer’s? The dementia itself results from the same plaques and tangles created by an abnormal buildup of a protein called beta-amyloid. But why it starts so early in some people is still being explored. It’s clear that for some families, like the Reiswigs, the disease is genetic.

Reiswig’s father — and grandfather, and great-grandfather, on back into history — all carried a defective gene called presenilin 1, on chromosome 1. This is the third gene to be identified as tied to “Familial Autosomal Dominant Alzheimer’s Disease” — a set of mutations that lead to early-onset Alzheimer’s anywhere between ages 28 and 65.

Because Reiswig’s father carried the mutated presenilin gene that confers early-onset Alzheimer’s disease, he knew he had a 50-50 chance of developing dementia himself at a young age. So in his 40s, he moved to the country with his wife and bought a hotel, wanting to be self-employed in case the disease took hold. He even planned his own suicide.

But unlike his brother and sister, Reiswig had won the genetic coin toss. He remained free of Alzheimer’s disease — at least, free of its debilitating effects on his own mind and body. Instead, he chose to chronicle his family’s losses in “The Thousand Mile Stare” and at the same time raise awareness of the unique burdens early-onset Alzheimer’s disease places on families — and the need for further research.

Gabrielle Strobel, in an article on early-onset dementia at the Alzheimer Research Forum Web site (www.alzforum.org), describes these burdens vividly: “When and how to tell the children? Will the marriage hold? What about genetic testing? Families face financial peril. How long can the affected parent hold on to his or her job? How can the spouse keep supporting the family? What about social security disability, long-term care insurance, college tuition for the kids? What to do if the patient makes irresponsible financial decisions? How best to persuade a 45-year-old that it is time to stop driving? What does one tell young children who wake up to find their parent wandering about the house in the throes of dementia?”

Unfortunately, as Strobel explains, although many families with a predisposition to early-onset dementia have contributed enormously to scientific understanding of the disease, affected family members are often left out of treatment trials because of their age.

That’s because most such trials don’t enroll patients under the age of 50 — an age by which patients with early-onset disease are already well into the throes of moderate to severe dementia and much less likely to be helped by the drugs being tested.

Fortunately, there is now a trial network aimed specifically at these families. The Dominantly Inherited Alzheimer Network (DIAN) is an international partnership involving researchers from the United States, Europe and Australia that is registering both family members with and without the genetic mutation that causes early-onset Alzheimer’s to study the brain changes that occur in the years before the disease sets in, and identify treatments.

In late 2009, scientists and study participants met at Washington University in St. Louis for a two-day conference focused on detecting Alzheimer’s disease before it becomes symptomatic. “The major goal is to identify the earliest signs, symptoms and biomarker changes in persons known to be at essentially 100 percent risk for developing AD. This data will be important for understanding the biology of the disease and organizing appropriate therapeutic trials,” said Dr. Thomas Bird, a leading Alzheimer’s disease researcher based at the University of Washington in Seattle, in an interview with the Alzheimer Research Forum.

Families also pushed for creating a system that provides psychological and emotional support within the DIAN network.

As Reiswig so powerfully illustrates, early-onset Alzheimer’s disease can destroy lives, torment and scatter families, and isolate people with the disease and loved ones alike. It carries all the same burden that dementia puts on any family at any age, multiplied a hundredfold by the agony of losing one’s mind at 45 rather than 85, as the father of a 10-year-old rather than that child’s grandfather or great-grandfather.

It’s a painful reality to contemplate, but one that should not be ignored — especially because we owe so much of what we now understand about the genetics of Alzheimer’s disease and other dementias to the families who have been willing to share their histories with the world.