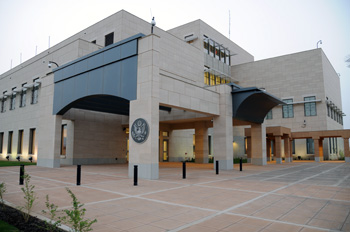 Visiting a foreign country’s embassy here in Washington is very much like a sneak preview of that nation itself. It starts with security, or lack thereof. There are some embassies that allow visitors to stroll right in unmolested, while others require guests to go through X-ray machines or submit to pat downs. The size, location and grandeur of the building reveal how prosperous the country is and the importance of its relationship with the United States. How the staff dresses, the hours they keep, and the events they host all give visitors a feel for the culture.

In recent years, the U.S. State Department has been under attack in the press for building fortress-like embassies and consulates abroad in out-of-the-way locations that offer security but allegedly shelter our diplomats from reality while projecting an unwelcoming image of our country. Last April, the State Department launched a new Design Excellence (DE) initiative as a response to the criticism. The aim of DE is to build greener missions in more accessible locations that project a more welcoming tone.

But finding city center locations and incorporating security, environmental and aesthetic features doesn’t come cheap. In an era of shrinking government budgets, can the United States afford to build secure, attractive, eco-friendly and people-friendly diplomatic facilities in central locations around the world — often at a cost of hundreds of millions of dollars each?

The movement to create more secure U.S. embassies and consulates overseas dates back to the 1983 bombing of the U.S. Embassy in Beirut, which killed more than 60 people and sparked congressional hearings chaired by Navy Adm. Bobby Ray Inman. The Inman Report made a number of security-related recommendations, but few were fully implemented until after the 1998 embassy bombings in Kenya and Tanzania, which galvanized Congress to prioritize funding for new embassy and consulate construction.

“Everything changed after the bombings in East Africa,” said Jane Loeffler, author of “The Architecture of Diplomacy: Building America’s Embassies.” “Congress came through with money that they hadn’t come through with after the Inman Report. Security was the number one reason why Congress came up with the money and that’s what’s still been driving the program.”

Building U.S. embassies abroad can cost hundreds of millions of dollars in part because of difficult logistics in places like Khartoum, Sudan, right.

Aside from the funding commitment, Congress also issued new security requirements for diplomatic facilities, including regulations mandating a 100-foot setback from vehicular traffic and nine-foot-tall walls, among others. Since that mandate was created in 1999, the State Department’s Bureau of Overseas Buildings Operations (OBO) says it has completed 88 new diplomatic facilities and moved more than 27,000 people into “safe, secure, and functional facilities.”

Most recently for example, Secretary of State Hillary Clinton broke ground on a new embassy compound in Rabat, Morocco, on Feb. 26. The 8.5-acre site will house a state-of-the-art, multi-building complex that includes a chancery and Marine security guard quarters and will employ roughly 300 employees. The $187 million project will also incorporate various sustainable features, including lights that automatically dim, reduced water-use plumbing fixtures and rain gardens, with an eye on attaining the Leadership in Energy and Environmental Design (LEED) Silver Certification by the Green Building Certification Institute.

The State Department is actually a huge player on the international real estate scene. It owns or leases facilities in 270 cities and 189 countries and is absent only from North Korea, Iran and Somalia. Its real estate portfolio also includes more than 20,000 properties, including nearly 18,000 residences for diplomats and more than 2,000 nonresidential properties, with total square footage of more than 80 million square feet.

U.S. embassies and consulates range in size from 1.6 million square feet for the Baghdad compound to 11,000 square feet for the consulate in Halifax, Nova Scotia. The Baghdad facility in particular has been held up as a model of wasteful spending. A Vanity Fair story put the construction tab at $600 million and estimated it cost an additional $1.2 billion per year to run. According to the story, the embassy has 619 blast-resistant apartments, a food court, tennis courts, a swimming pool, a bomb-resistant recreation center, a department store, a beauty salon and a movie theater, among other things. (More recently, U.S. officials announced plans to “right-size” and reduce the mission’s footprint.)

And while the compound in Baghdad may be the ultimate example of a fortress embassy, it hasn’t been the only new mission to be lambasted in the press. Plans for the new embassy in London, in particular, have drawn rebukes from both sides of the Atlantic.

Harvard professor Stephen Walt, writing in Foreign Policy in 2010, argued that “the ‘Fortress America’ approach to embassy design presents a public face that is an odd combination of power and paranoia.” He went on to say that the United States “ought to take all reasonable measures to ensure that our diplomats are adequately protected,” but warned that “it’s possible to go too far in the quest for perfect security.”

The Economist wrote a critical piece on U.S. fortress embassies in July of last year titled “First, dig your moat,” which referred to some recent U.S. creations as “near-identical, boxy bunkers.” And the backlash hasn’t been confined to the media. Sen. John Kerry (D-Mass.), who heads the Senate Foreign Relations Committee, said in 2009, “We are building some of the ugliest embassies I’ve ever seen … I cringe when I see what we’re doing.”

But Thomas McCarthy — a principal at PageSoutherlandPage, an architectural firm that has designed more than 20 U.S. embassies and consulates over the last decade, including recent projects in Islamabad, Monrovia, Dakar, Rabat, Addis Ababa, Ouagadougou, Brazzaville and Khartoum — doesn’t put much stock in the criticism.

“A lot of the criticism comes from people looking at a project in a place like Ouagadougou and saying, ‘That looks like a fortress,’ but oftentimes these buildings are the nicest ones in the country,” he said. “It’s a safe, modern and highly efficient work environment. I don’t place a lot of credence in the criticism; these critiques are coming from people who are very far from the realities of the situation.”

McCarthy said that in designing U.S. embassies, architects’ hands are often tied by the U.S. government procurement process, which requires them to use the same windows and other construction materials around the world. The components are usually functional but look cheap. 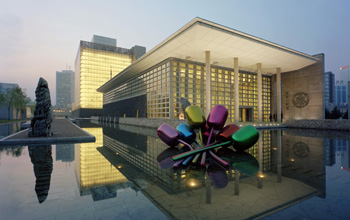 The enormous U.S. Embassy in Beijing, above, was completed in October 2008 and is among the nearly 90 new diplomatic facilities built by the State Department’s Bureau of Overseas Buildings Operations since 1999, when Congress mandated tougher new security requirements for missions overseas.

Christine Foushee, OBO’s director of external relations, said that the State Department is responding to the fortress flak.

“Our intent is to address the criticism while still embracing security,” she said. “We’re mindful that lives are at stake, so the security requirements are part of Design Excellence. It’s a matter of applying creativity to the standards.”

Foushee and McCarthy said that State has used perimeter greenery, water features and other measures to soften the appearance of U.S. missions.

“It’s really about presenting less of a perimeter-wall front door and more of a landscape with a fence or some other feature as the first thing you see when you come to an embassy,” McCarthy explained. “In the case of London, it’s a water feature. It’s something else that provides the same protection but with a less severe front door than we’ve seen in the past.”

Foushee noted that most of the recent embassies that have opened were designed prior to the DE initiative, but still have some green technology features that weren’t in place even a few years ago. She says that within two to three years, people will begin to notice a new breed of embassies and consulates that are secure but also more centrally located with a more welcoming aesthetic appeal.

Five years ago, Loeffler wrote a critical piece on the security-first U.S. construction approach in Foreign Policy, but she said that OBO has improved its approach markedly since that time.

“They’re trying to bring buildings back closer to the center, closer to public transport, and making them more functional and also greener,” she told The Diplomat. “There’s been a great change. I would never say that security shouldn’t be the first priority, but design and security don’t have to be mutually exclusive. In fact, good design can enhance security and our image.”

But even if State has gotten the message that embassies need to be more than just secure, how should taxpayers feel about the flurry of costly construction activity overseas? The average cost of a medium-size embassy can run over $100 million, and some, like the new embassy in Kiev, Ukraine, which totaled $247 million, can cost much more.

McCarthy said that difficult logistics in places like Sudan and the Republic of Congo can drive up prices. He also noted that U.S. law requires that at least some of the construction workers at each site be cleared U.S. citizens, rather than locals, who would be paid much less in most countries. The number of U.S. workers required varies depending on the threat level of each country.

The legislation originated after the United States found listening devices embedded all over the U.S. Embassy in Moscow in 1985, an incident that required us to completely rebuild the embassy. The law helps to create jobs for Americans but also pushes up the cost of construction, especially in countries deemed “critical threats” where a large portion of the embassy has to be completed by U.S. workers.

Foushee said that OBO’s funding over the last decade has been steady, but indicated that their budget has also been cut and they’ll likely have to scrap at least one new proposed embassy over the next few years. Projects will move forward or be put on a backburner depending on priorities and what’s feasible.

“A lot of it is doability,” she said. “There are places on the list where we can’t find a site or aren’t able to purchase a site, so it makes it impossible to move forward. We build where we can with the money we’re given.”

The 2012 fiscal year budget for new construction is about $1 billion. So why should taxpayers support the construction of secure new embassies in low-threat countries like Latvia or Malta?

“People shouldn’t have to work in high-risk situations doing such important work for our country,” Loeffler said. “Diplomacy is our most important initiative and it’s so much less expensive than war. We need to make the buildings attractive and functional, but they’re also targets so they need to be secure.”