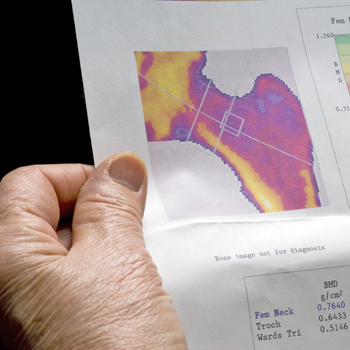 How often should women be screened for osteoporosis? Most women assume that they need a bone density scan every year, or at least every other year, once they reach menopause. After all, that’s the magical life stage at which our hormone levels start tanking and all kinds of health risks start skyrocketing, right?

Actually, for women in otherwise normal health — meaning you don’t have significant risk factors (such as a family history of osteoporosis, personal history of unexplained fractures, premature menopause, regular use of corticosteroids, and the like) — the usual recommendation is that you don’t need to start getting BMD (bone mineral density) testing, which measures the strength of your bones, until age 65.

At that point, though, many doctors have recommended that women get BMD testing on a regular basis, every year or every other year. These recommendations have been based as much on clinical guesswork and advocacy as they have on solid, research-based evidence.

But now, a new study published in the New England Journal of Medicine shows that if you test normal on a BMD scan, you can probably wait as long as 15 years before getting your next one.

The researchers followed a group of nearly 5,000 women ages 67 or older who did not have osteoporosis at the beginning of the study. Some had totally normal bone density; others had mild, moderate or advanced osteopenia, a condition involving lower-than-normal bone mineral density that isn’t yet low enough to be called osteoporosis, but is considered by many doctors to be a precursor to the disease.

Over the course of the 15-year study, less than 1 percent of the women who started out with normal BMD developed osteoporosis. Even among those with mild osteopenia, only 4.6 percent developed the disease during that time frame. (Remember, by the end of the study, all women participating were at least 82 years old.) Moderate and advanced osteopenia at the outset were the big predictors of osteoporosis: 20.9 percent of the moderate group and 62.3 percent of the advanced group went on to full-blown osteoporosis.

Based on these findings, the investigators — a team led by Dr. Margaret Gourlay of the University of North Carolina at Chapel Hill — say that women with normal BMD or mild osteopenia at their first scan can wait at least 15 years for the next one, without risk of developing osteoporosis so significant that they will break a bone. (The same researchers published a study in 2010 indicating that a 10-year interval between scans was fine for women with normal bone density to mild osteopenia; their more recent findings appear to open that window even further.)

Even women with moderate cases of osteopenia probably don’t need the every-other-year screening that some doctors have been recommending for women over 65, according to the study. Gourlay and her team recommend BMD tests about every four years for this group, and annual testing only for those with the most severe cases of osteopenia.

There are limitations here, of course. The researchers didn’t look at premenopausal women or those in the early stages of menopause (usually by the time you’re 67 or above, menopause is well in the rear-view mirror).

It’s quite possible that osteoporosis behaves differently in younger women. For example, if even mild osteopenia is already present in a woman who’s just turned 50 and has only recently gone through menopause, might it progress more quickly to osteoporosis (and the risk of breaking a bone) than in a woman who only has mild osteopenia in her late 60s? The study doesn’t consider that question.

And the researchers do point out that BMD scores aren’t the only predictor of how long it will take a woman to develop real osteoporosis (and a heightened risk of fracture). The older women in the study took less time to progress from osteopenia to full osteoporosis than did the younger women. So, for example, if you’re 85 with moderate osteopenia, you might want to get scanned again in three years, rather than the five years they say is OK for a woman in her 60s or 70s.