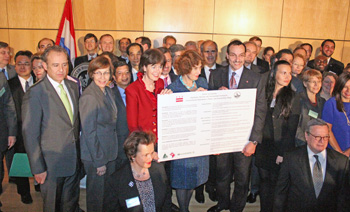 The Dutch have long been at the mercy of Mother Earth. A country largely at or below sea level, as early as the 12th century the Dutch began constructing dikes, dams and levies to hold the waters of the North Sea at bay. This grudging respect for the power of nature has also helped the Netherlands embrace the value of sustainability and environmental stewardship — anyone would want to slow the melting of global ice caps if it meant the difference between countrywide flooding and not, after all.

In early 2010, that spirit of sustainability was brought to a Dutch outpost across the Atlantic, as the country’s ambassador to the United States, Renée Jones-Bos, outlined a plan for the embassy in upper Northwest Washington to become more eco-friendly. (The plan was titled “Orange Goes Green” in honor of the Netherlands’ historic national color.) Two years later, the 50-year-old structure was awarded LEED (Leadership in Energy and Environmental Design) Silver Certification by the U.S. Green Building Council, making it only the second embassy in Washington to get that recognition for its efforts to make its operation less taxing on the environment. (The Embassy of Finland was the first, having received LEED Gold Certification in 2010.)

Dozens of ambassadors, diplomats and D.C. and U.S. government officials came out to sign a “Neighbors in Sustainability” pledge — coordinated by the State Department’s DC Greening Embassies Forum — the first collaborative initiative of its kind to help make D.C. the greenest city in the country.

With that recognition under their belts, the Dutch could be forgiven for having boasted a little during a ceremony in late January, when 47 embassies and three international organizations came together at the Royal Netherlands Embassy to sign the “District of Columbia Diplomatic Missions and International Institutions Environmental Performance, Climate, and Sustainability Pledge,” a list of eight environmental indicators from energy to eco-purchasing that the foreign missions pledged to work on in concert with D.C.’s local government (also see “Embassies Go Green” in the lifestyle column of the February 2012 Diplomatic Pouch online).

The pledge-signing ceremony was part of the Greening Embassies Forum, which was established as a central component of the Greening Diplomacy Initiative launched by Secretary of State Hillary Clinton on Earth Day 2009 to improve the environmental performance and sustainability of the State Department’s facilities and operations abroad. The forum has a more local focus, bringing together the State Department and the 175 foreign missions in Washington to discuss sustainability initiatives and exchange ideas, with the goal of making D.C. the greenest city in the country. Over the last year and a half, the forum has organized a variety of quarterly workshops and discussions on everything from water use to retrofitting embassies to be more energy efficient.

“We wanted to see if [embassies] were interested in cooperating on any sort of environmental projects that had to do not just with the city, but with greening their own operations, greening their buildings. It was supposed to be a place where we can come together and share best practices,” explained Katie G. Kirkpatrick, a program analyst in the office of the State Department’s Special Advisor for Environmental Performance.

But in a step forward for the forum, January’s pledge-signing included the participation of D.C. Mayor Vincent Gray, who has made sustainability one of his administration’s key priorities. More than ever before, the forum would serve as a means to better connect embassies and the city they occupy on sustainability projects that could benefit both.

“This pledge is extremely special because it wraps the aspirations of our institutions with that of the local community,” noted Undersecretary of State for Management Patrick Kennedy at the signing. “Recognizing that we not only work in the District but leave an impact and footprint means we must work in parallel with the city and join forces to a common goal. By doing so, we are not only international organizations but local contributors and sponsors to the community from whom we gain so much.”

According to Stephan Raes, the Dutch Embassy’s minister for economics and point person on the sustainability initiatives, this spirit of local engagement helped to motivate the mission’s own efforts to green its operations.

“You’re not an island. You’re part of a community, you’re part of a neighborhood,” he said. “It’s also, of course, practice what you preach. We talk on sustainability in all kinds of international conferences … but in the end it’s also the question to what extent can you make a difference yourself?”

The forum is doing more than just talking. The State Department is helping to coordinate various projects that will make an impact locally, said Kirkpatrick. One of the most important tackles storm water runoff, which has long been a vexing problem for Washington. During heavy storms, the city’s aging sewers overflow, dumping sewage into both the Potomac and Anacostia rivers. While city officials recently broke ground on a massive infrastructure project below the Anacostia that will keep runoff out of the rivers, they are also providing incentives to institutions that turn impervious surfaces like roofs and parking lots into gardens that can absorb excess water. 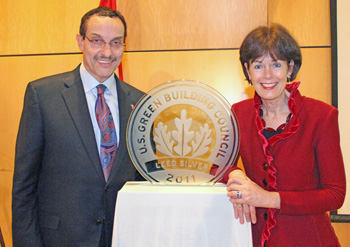 In come the embassies. According to Kirkpatrick, the Diplomatic Gardens project that her office is helping to coordinate is identifying plots of land around the city that embassies can help turn into rain-absorbing gardens. Three locations have been found, including a median in an embassy campus on Van Ness Street, NW. Different embassies will be invited to plant native, non-invasive species on the median, turning it from a concrete eyesore to a natural rainwater sponge. “The focus [of the project] is to reduce runoff and beautify the city,” she said.

Another project is geared toward getting diplomats out of their cars. Kirkpatrick said that her office is working with Capital Bikeshare, the city’s increasingly popular bike-sharing system, to offer a class on defensive cycling and maps of local cycling trails and routes for embassies and their workers. The hope is that the classes will coincide with National Bike to Work Day, which takes place on May 18.

Raes said the Dutch Embassy has transported the country’s notorious love of cycling stateside, and offers its employees a number of shared bikes to get to and from the Van Ness Red Line Metro station. “We’re not too far from the Metro, and these bicycles just make a difference between people getting in their car and getting on the bike and using the Metro to go to appointments and meetings in the city,” he said.

The sustainability drive can also involve actions as simple as dimming the lights, shutting down computers at night, or printing on both sides of the paper.

For Christophe Tulou, director of the city’s Department of the Environment and a native of Switzerland, the various programs and initiatives undertaken by the forum’s members both help and complement work that he’s already doing. Beyond the storm water runoff, Tulou notes that energy use is a big priority for him. More than 75 percent of the city’s energy use comes from office buildings, including embassies.

In January, the U.S. Green Building Council recognized the District as having the most LEED-certified office space per capita in the United States, with close to 19 million square feet — roughly 31 square feet per resident. The city also has one of the world’s highest densities of foreign missions within its jurisdiction, so the fact that embassies are slowly curtailing energy usage boosts the city’s efforts to cut down on waste.

Additionally, the exchange of information and best practices between embassies and the city that hosts them goes both ways, said Tulou. “To the extent that we’re able to engage them in an effort to make their facilities more energy efficient and deploy renewable energy, it creates an opportunity to advertise their good performance with folks who would naturally be coming to visit, and in some cases for them to deploy technologies and practices that are new to us that they import from their home countries and serve as pilots for us.”

Of course, sustainability for the sake of sustainability might not go very far on its own — especially in an era of budget cutbacks across the world. But Raes plays the fiscal conservative when he notes that the Dutch embassy looks to save $50,000 a year on energy expenses; other embassies have seen similar budgetary benefits to going green.

“By simply looking at your own energy consumption, you can look for opportunities to save money,” Raes said, adding that the Dutch didn’t do anything that any other foreign mission couldn’t replicate.

Tulou agrees, and thinks that talking in terms of cost savings could be appealing to a wider range of embassies and institutions. “If you think about countries and their foreign embassies, some countries are present in a lot of different countries, and if you take that cost savings and multiply that over a multiplicity of facilities around the world, you really are talking about something quite significant,” he said.

And though he fully celebrates the notion of cooperation, Tulou brings a typically American perspective to the sustainability initiatives: competition. “This also creates, within that community, this sense of competition. And it came out during the course of the pledge-signing ceremony. Embassies and their ambassadors sort of said, ‘Hahaha, we’re doing this in our facility,’ and others made note of that and are trying to emulate and, perhaps, sort of surpass the environmental or sustainability performance of that facility.”

That competitive streak could also propel Washington as it moves toward a greener future. “We’re not beyond stealing great ideas, that’s for sure,” he said with a laugh.