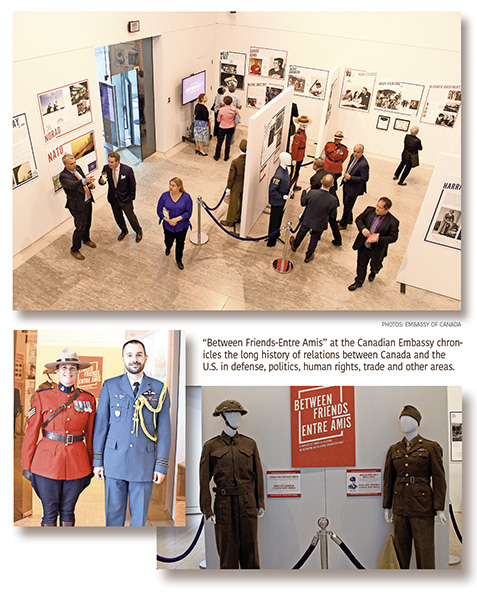 For the past 150 years, the United States and Canada have shared the longest border between any two countries, created one of the world’s most inextricably linked economic relationships — trading a staggering $2 billion in goods and services each day — and collaborated closely on matters ranging from security to human rights.

But that long history of collaboration is being challenged by an “America First” president who has questioned some of the country’s most fundamental alliances. That includes Canada, our large, unassuming neighbor to the north that frequently refers to itself as America’s best friend.

Given the less-than-friendly rhetoric emanating from the Trump administration, it only makes sense that the Canadian Embassy in Washington is reminding Americans of this close, mutually beneficial relationship with the exhibit “Between Friends-Entre Amis: A Snapshot of Canada-U.S. Relations.”

Ottawa has lobbied hard for the trade deal. Last October, after over a year of negotiations, the U.S., Canada and Mexico agreed to overhaul the 1994 agreement responsible for $1.2 trillion in annual trade among the three nations. And while Mexico recently ratified the deal, Canada appears to be waiting on Congress to approve the trade pact.

“Between Friends-Entre Amis” is also timely because of two milestones: the 150th anniversary of U.S.-Canada relations and the 30th birthday of Canada’s embassy on Pennsylvania Avenue close to Capitol Hill.

Denis Chouinard, the embassy’s public affairs counselor, said he was looking for a way to commemorate both anniversaries. “It started with meeting someone at the Meridian International Center a year and a half ago,” he told us. There, he saw “Northern Lights,” an exhibition by the U.S. Embassy in Canada documenting 150 years of relations. “It was interesting to see the U.S.’s take on the relationship, the friendship,” Chouinard said.

He was inspired to bring the exhibit to Washington, where Sarah Boorom curated the new display of posters that record the trajectory of U.S.-Canada ties.

“I started with the logo,” said Boorom, referencing the square that partially confines the bilingual exhibit name. “I wanted the name ‘Between Friends’ in English and ‘Entre Amis’ in French to be together … they’re together in a consolidated unit, but it is also open.”

The logo encapsulates the theme of the exhibit. Both countries, while distinct, are geographically, economically and culturally connected.

The relationship between the U.S. and Canada is as old as Canada itself. Harriet Tubman led people from enslavement in America to freedom in Canada. Sir William McDougall and President Abraham Lincoln shared a friendship so personal that McDougall attended the Gettysburg Address — Chouinard pointed him out in a photo of the event. Four years later, McDougall and over two dozen other men would lead their nation’s own union as “Fathers of Confederation,” which saw Canada’s British colonies, Nova Scotia and New Brunswick united under one dominion of Canada on July 1, 1867.

Around the same time, British North Americans crossed the border to fight in the U.S. Civil War, triggering the nations’ commitments to mutual defense, an area that has also come to define the U.S.-Canada relationship over the decades.

“Because of the importance of the security dimensions, we elaborated on the past and the strong ties between Canada and the U.S. in the context of NORAD and NATO,” Chouinard said, referring to the transatlantic security alliance and the North American Aerospace Defense Command.

Two mannequins dressed as World War II soldiers from Canada and the U.S. greet visitors and herald the exhibit’s focus on the long history of defense cooperation between the two countries.

The exhibit itself reflects the longstanding institutional partnerships between the two allies, with the Canadian Embassy working with various American organizations, including an FBI historian, to procure the war regalia on display.

Beyond the political, the exhibit documents the personal ties between the two neighbors embodied by filmmakers, writers and athletes.

For example, Canadian Willie O’Ree was the first black professional hockey player in the National Hockey League, joining the Boston Bruins at the age of 22. He was inducted into the Hockey Hall of Fame last November and on Feb. 27, the Canadian Embassy and the NHL co-hosted a reception to honor O’Ree, 83, and to promote efforts to award him the Congressional Gold Medal.

The exhibition features a photograph of O’Ree among his American teammates, a simple but poignant visual reminder of the camaraderie between friends — one that transcends borders.

Virginia Sciolino is an editorial intern for The Washington Diplomat.