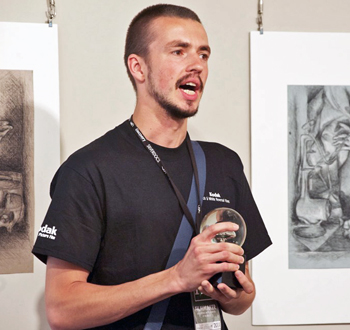 The AFI-Discovery Channel Silverdocs Documentary Festival wrapped up in June at the AFI Silver Theatre in Silver Spring, Md., and other venues across town, offering seven days of some of the top docs the world. And the winners of the annual filmmaking showcase — now in its ninth year — offer a glimpse into the crème de la crème of what Variety magazine dubbed the “nonfiction nirvana” highlighted at the festival.

Below are the winners whose documentaries reveal a slice of life around the planet:

“Family Instinct,” directed by Andris Gauja, doesn’t hold back in its penetrating look at an unusual Latvian household defined by the incest between Zanda and her incarcerated brother Valdis, whose forthcoming freedom from prison will definitely shake up things.

The Sterling Award World Jury observed that “a slice-of-f#@ked-up-life portrait, the director of this film clearly had fly-on-the-wall access to his subjects, but some scenes, shot from multiple angles, are so formally composed as to seem staged. That’s not a bad thing: For all the desperation and depravity of the story, the filmmaker rescues a narrative of deep sadness and yearning that’s as touching as the circumstances are shocking.”

“Position Among the Stars,” directed by Leonard Retel Helmrich, looks at the slums of Jakarta through the point of view of the Shamuddin family, living with their fears, dreams and struggles in Indonesian society.

According to the jury, the film, the final part of a trilogy, “explores a multi-generational family at the cusp of societal upheaval [and] is the culmination of a filmmaker’s aesthetic, thematic and philosophical mission.”

“Our School,” directed by Mona Nicoara and Miruna Coco-Cozma, explores how three country-dwelling Roma (Gypsy) children ranging in age from 7 to 16 attempt to assimilate into Romania’s public school system.

The jury said it was impressed by the “intimate depiction of a marginalized and underrepresented community, whose voice is seldom heard. The filmmaker brings to light a timely human rights issue with compassion and intimacy.”

“The Bully Project,” directed by Lee Hirsch, tracks five children and their families over an entire school year, examining how their lives are affected by bullying, a growing concern in American society.

“This tortuous experience of youth is shared by many, but is bravely revealed in this film through characters who confront their experience and work to reclaim their dignity,” the jury noted. “The filmmaker’s access shows the enormous trust established with his subjects. The result is a film that doesn’t reduce people to their worst experience, but rather elevates them to a level of marginalized heroes and heros we should all aspire to emulate.”

“When the Drum Is Beating,” directed by Whitney Dow, recounts the complicated history of Haiti and the toughness of Haitians via Septentrional, the most lauded band in Haiti over six decades.

“The synergy of place is the motif in this beautifully crafted ode to a people,” the jury said of this “ambitious, multi-dimensional articulation of the identity of a country seen through layers of history, inter-generational, political and natural disasters set against a lyrical and poetic narrative backdrop.”

“Guañape Sur,” directed by János Richter, travels across a rocky island off Peru’s coast where thousands of seabirds breed. Every 11th year, hundreds of workers make an arduous pilgrimage to the island to collect the seabirds’ excrement for fertilizer despite an extreme landscape that reminds viewers of the constraints the environment places on humans.

“Still Here,” directed by Alex Camilleri, shows how Randy Baron, who’s been HIV-positive for over 20 years, witnessed AIDS tear apart his partner and multiple pals, who died in the 1980s when a diagnosis of AIDS was a death sentence.

In Al Morrow’s “Donor Unknown,” Jeffrey, a free-spirited anonymous sperm donor living in Venice Beach, is connected with the more than 15 children he helped to create in this unique meditation on the definition of family.

In Matt Morris’s “Mr. Happy Man,” 85-year-old Johnny Barnes has stood at the same intersection for years, waving at people while screaming, “I love you!”

Whole Foods Market and Silverdocs Grant for Works in Progress ($25,000 cash grant each)

Margaret Brown examines the 2010 Deepwater Horizon oil spill’s impact on her hometown of Mobile, Alabama, in “The Great Invisible,” while Ian Cheney dissects the plight of urban waterways in “Bluespace.”