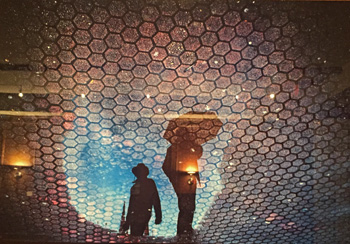 Photos: Embassy of Argentina / Courtesy of the Artist

Fragments of the familiar collide with realms of the unknown in “Mirages,” the latest offering in the Embassy of Argentina’s thriving roster of cultural events.

Artist Mache del Campo hopes visitors come to her exhibition with an open mind and use her photographs as a departure from their physical environs to a more imperceptible, intangible world.

Traces of vaguely familiar surroundings punctuate del Campo’s work — the shimmering reflection of a bridge, a patch of ice, people gliding underwater — but the angles are often skewed and the context is missing. Del Campo captures single images without a backstory to leave the interpretation open to the viewer’s imagination.

Del Campo said she aims to use her camera as a gateway to “personal dimensions beyond the realism of the photographic image…. My goal is to create, express and question through images.”

When asked what Washingtonians can expect from the questions del Campo’s photography raises, she said she hopes her work inspires their fantasy and intuition to flow. “They can discover in their minds, in their imagination, other worlds and other dimensions,” she said. “This is unique because they will be the only spectators of their unique interpretation.”

Some of del Campo’s photography was shot in her home country of Argentina, while others were taken during her extensive travels.

“I would like people to know that there is a profusion of creativity and talent in our country,” del Campo said. “It would be wonderful if my photos kindle the viewer’s interest and curiosity about other talented Argentine photographers.” 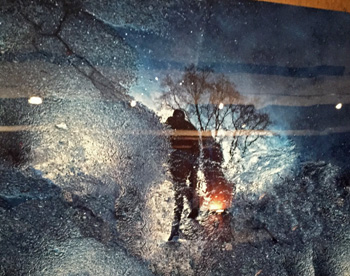 That’s the mission of the Argentine Embassy as well. Last year, it opened an Argentine Cultural Corner within the embassy, transforming a former library into a new cultural and meeting space that’s open to the public. The space houses a growing collection of more than 2,500 books, movies, CDs and digital resources reflecting different aspects of Argentina, including literature, science, food and wine, cinema, music and tourism, in addition to a special children’s section.

In fact, the embassy is one of the most culturally active in town, regularly hosting or sponsoring events ranging from tango lessons and bimonthly exhibitions to concerts and films at local festivals. It has partnered with venues and organizations such as the Kennedy Center, National Gallery of Art, Washington Ballet and Washington Chorus.

Minister Federico Barttfeld, head of cultural affairs at the embassy, said this focus on culture exposes American audiences to other facets of Argentina, including its natural beauty and diversity. “Every time we have an exhibition at the embassy that includes Argentine landscapes, we get many inquiries about tourism in Argentina,” he noted.

The “Mirages” display has been highly successful so far, according to Alfredo Ratinoff, the embassy’s curator. The opening reception held in the embassy’s theater showcased the photography printed on metal along with a video montage of the artist’s work, perfect for a completely immersive experience. 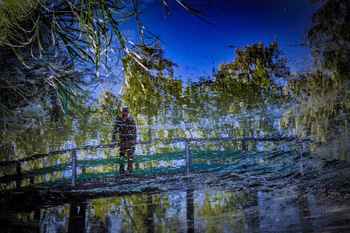 When Ratinoff first examined del Campo’s photographs, he discovered many different messages and layers in her enigmatic imagery. “In each of her works, there is a spiritual message that conveys the subtle connection between the spirit and water, one of the primary elements,” he observed. “The combination of basic elements with human life in these works is done in such a way as to create a barrier between, and a symbiosis with both, leading us to question our relationships with each other as well as our connection to the world around us.”

Ratinoff said he doesn’t have a favorite photo in the exhibit. When choosing artists to showcase at the embassy, he eschews individual pieces in favor of works that tell a cohesive story. In del Campo’s case, her body of work created an overall visual and personal impact. “However, one of my favorite aspects of this exhibition, as it is for every exhibition, is to be able to present an artist with his or her unique and Argentine perspective and see the impact this has on the viewer,” he said.

The Embassy of Argentina has a full calendar of events over the next two years. Its next exhibit, “Translocation,” features contemporary frescoes by Argentine artist Jorge Caligiuri that incorporate surface repetition and division to create a simple but striking visual experience.