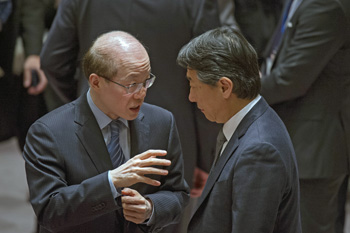 The North Korean dictatorship has a habit of seizing the attention of American officials through provocative weapons tests after months of laying low.

Such was the case when Pyongyang earned headlines after conducting its fourth nuclear test in January and launching a rocket into space in February. News of the Feb. 7 launch broke during a Republican presidential debate.

Sen. Ted Cruz (R-Texas) called for the United States to improve its missile defenses, while claiming that North Korea could detonate a nuclear bomb over the U.S., potentially killing millions. Sen. Marco Rubio (R-Fla.) said North Korea should be put back on the U.S. list of state sponsors of terrorism. Businessman and Republican frontrunner Donald Trump said he would use his dealings with Chinese nationals — presumably the same ones he threatened with a hefty 45 percent tariff on the campaign trail — to get Beijing to pressure North Korea into better behavior.

North Korea’s emergence as a hot topic was both a Rorschach test for the candidates and a reminder that the hermit kingdom does not often command the same attention with U.S. politicians as Iran, the Islamic State or Vladimir Putin’s Russia.

On the Democratic side of the presidential race, Vermont Sen. Bernie Sanders has argued that North Korea is more dangerous than Russia or Iran. His campaigning nonetheless kept him from a Feb. 10 vote to impose more sanctions on North Korea. The episode underscored what has arguably always been true of U.S. policy toward North Korea: Time is on the reclusive regime’s side.

“It’s a strategic disadvantage for democracies because leaders come and go by elections, whereas Kim Jong-un is a dictator for life, so he can take his time,” said Sung-Yoon Lee, assistant professor at the Fletcher School of Law and Diplomacy at Tufts University.

In the first few years of his administration, President George W. Bush criticized Bill Clinton’s agreement to freeze and dismantle Pyongyang’s nuclear program, labeling North Korea among his famed “axis of evil.” In the last few years of his presidency, though, Bush tried to entice North Korea into curbing its nuclear program in part by sending food aid and removing Pyongyang from the U.S. list of state sponsors of terrorism. Neither move had a demonstrable effect on North Korea’s nuclear trajectory.

Barack Obama took office in January 2009 intent on not repeating what he viewed as the mistakes of his predecessor. The resulting Obama policy has been dubbed one of “strategic patience.” It includes trying to convince China to exert more pressure on North Korea and tightening the screws on Pyongyang through sanctions and the interdiction of arms shipments.

In March, the U.N. Security Council did just that, slapping tough new sanctions on North Korea following its nuclear test and missile launch, although implementation will largely depend on the cooperation of member states, most notably China. The U.S. said the goal of the sanctions is to bring the North back to the nuclear negotiating table. Shortly afterward, however, Kim announced that his government had successfully miniaturized a nuclear warhead to mount on a ballistic missile. While experts remain skeptical of Kim’s latest nuclear claim, few doubt his determination to build a formidable nuclear deterrent.

Seven years after Obama took office and two nuclear tests later, there is a familiar feeling among North Korea watchers: The next U.S. president will inherit the dangerously intractable challenge of denuclearizing North Korea.

Over two decades of U.S. negotiations with North Korea have yielded $1 billion in U.S. aid to Pyongyang, but nothing in the way of denuclearization.

The South Korean government reacted forcefully to North Korea’s January and February weapons tests. President Park Geun-hye moved to close down an inter-Korean industrial project while conceding that wages meant to go to North Korean workers were funding the regime. She also opened talks with the United States over a missile defense system that China strongly opposes. At the same time, Park has invested heavily in building closer ties with China, which provides vital aid to North Korea’s anemic economy.

In the aftermath of North Korea’s recent weapons tests, South Korea has “shown that they’re all-in to see an international effort that would create a moment of choice for North Korea,” said Scott Snyder, a senior fellow for Korea studies at the Council on Foreign Relations.

Perhaps the more crucial question, however, is how committed China is to the push by the U.S., South Korea and Japan to clamp down on North Korea. Despite Beijing’s frustrations with Kim’s unpredictable leadership, China remains North Korea’s most crucial ally. It continues to provide the North with food, money, weapons and energy in an effort to prop up the regime, fearing a collapse would lead to a reunified Korea (and a strong U.S. ally on China’s doorstep) and a flood of impoverished refugees across China’s 870-mile border with North Korea.

Sharon Squassoni and Amelia Armitage, writing for the Center for Strategic and International Studies, said the latest round of U.N. sanctions reflects increasing Chinese impatience toward its client state. 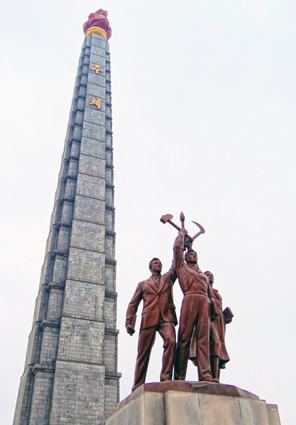 The Juche Tower in Pyongyang is a monument to the North Korean ideology of self-reliance.

“For the first time, according to reports, the United States and China worked closely to negotiate the sanctions provisions,” they wrote. “China’s willingness to impose more stringent sanctions may signal waning tolerance of North Korea’s provocations, but only active compliance with the new measures will demonstrate real resolve.”

Snyder, however, argues that the aftermath of North Korea’s previous nuclear test, in 2013, was a better moment for U.S.-China cooperation on the issue. Since then, U.S.-China tensions in the South China Sea have grown and bilateral cooperation on North Korea is “considerably more reluctant” and probably “insufficient to push the ball over the line,” Snyder said.

Meanwhile, Kim Jong-un, North Korea’s brutal young dictator, has looked to tighten his grip on power. He has purged top officials and pursued a dual track policy, known as the “byungjin” line, that pairs economic and nuclear development. The two goals have become closely linked, and in March 2013, North Korea’s ruling party adopted them as official policy. Pyongyang’s nuclear weapons “are neither a political bargaining chip nor a thing for economic dealings,” Kim said at the time, according to the state-run news agency.

That resolve to develop nuclear weapons in tandem with the economy marked a policy shift for the North, from ambiguity to clarity, according to Snyder. “That clarity of intent greatly reduces the scope and space for diplomacy,” he told The Diplomat.

Siegfried Hecker, a nuclear expert at Stanford University who has visited North Korea, has made a similar point — that denuclearization becomes less likely as Pyongyang stocks up on bombs.

“More bombs and better bombs matter,” wrote Hecker. “The progression from developing the nuclear weapon option, to having a few bombs, to fielding a nuclear arsenal has made Pyongyang increasingly reliant on its nuclear weapons for regime survival and has dimmed the prospect of a denuclearized Korean peninsula.”

The professor also took a dim view of Washington’s ability to solve the problem. “Five U.S. administrations determined to prevent North Korea from becoming a nuclear weapon state through various combinations of diplomacy, threats, ultimatums and sanctions all failed.”

Faced with a recalcitrant North Korea, U.S. policymakers have again turned to sanctions, one of the few peaceful means at their disposal to alter Pyongyang’s behavior.

Once a blunt instrument, U.S. sanctions have grown more tailored and arguably more effective after the 9/11 terrorist attacks put illicit financing on the world stage.

After North Korea’s Feb. 7 rocket launch, Congress passed a long-stalled sanctions package that Obama signed into law. The measure requires the president to investigate people or banks that might merit sanctioning for their dealings with North Korea. The Fletcher School’s Lee called the new law “potentially the most decisive or the most important factor in any improvement in North Korea policy.”

Most of the North Korean financial transactions investigated by a United Nations panel were made in U.S. dollars from foreign-based banks and transferred through banks in the United States. Lee argues that this gives the United States great — and hitherto largely untapped — leverage in pressuring North Korea. The oft-cited refrain that North Korea is already “the most sanctioned country in the world” and such penalties will have little effect is a farce, Lee and other experts say.

As Evans Revere, former deputy chief of mission at the U.S. Embassy in Seoul, told the Financial Times in January, “There are a whole range of measures taken against Iran that were not taken against North Korea — and the irony is that Iran does not have nuclear weapons.”

The U.N. Security Council has since imposed tougher sanctions on North Korea, but proof will be in the implementation. Among other things, the most recent U.N. resolution broadens the scope of previous sanctions by targeting natural resource sales, freezing North Korean assets, banning weapons trade and inspecting all cargo going in and out of the country.

“However, implementation of inspections depends on voluntary cooperation of member states, including China, and North Korea is adept at using foreign-flagged vessels and other forms of misdirection to obscure imports of sensitive items,” wrote Snyder in a Council on Foreign Relations brief.

North Korea financial links to China are another major complicating factor, and analysts say China has been slow to implement a previous U.N. resolution.

“Blind faith in sanctions and pressure …  are not a responsible approach for the future of the Korean Peninsula,” Chinese Foreign Minister Wang Yi warned recently.

Meanwhile, Kim Jong-un will bide his time as the United States runs through another election cycle.

Snyder sees a willingness from Washington to accept the status quo of a nuclearized North Korea so long as it doesn’t accelerate its program and pose a direct threat to the United States.