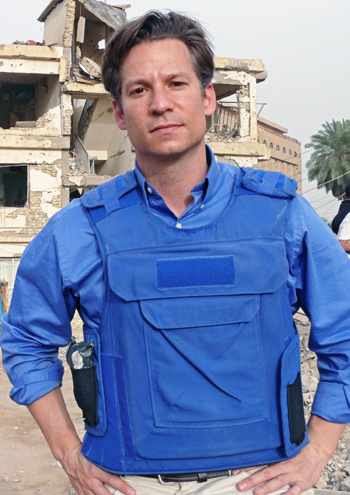 Over the past two decades, few, if any, American war correspondents have covered as many miles or as many big stories as NBC’s Richard Engel.

In an era when newsrooms are consolidating and closing foreign bureaus, Engel has managed to duck the budgetary chopping block — and occasional crossfire — while reporting on conflicts throughout the Arab world as chief foreign correspondent for NBC News.

The major media platform gives Engel access to millions of American viewers and immense power to help shape domestic perceptions of the Middle East. By most accounts, Engel goes about his work fairly and responsibly, even if colleagues have at times described him as having a “cowboy” ethic that puts him at greater risk than sometimes necessary.

Engel, who joined NBC News in 2003, has covered unrest throughout the region, from the U.S. invasion of Iraq to the Arab Spring revolutions in Egypt, Libya and, notably, Syria. In a Diplomat interview, Engel discussed the tumultuous landscape he has covered and the actors he has come across, from the Taliban to the Islamic State.

He also writes about his high-profile career in a new book, “And Then All Hell Broke Loose: Two Decades in the Middle East.” In the book, Engel sizes up the current state of the region using specific anecdotes that bring a sometimes murky big picture to vivid and compelling life. The Stanford University graduate writes simply, with a reporter’s eye for detail and a war correspondent’s keen understanding of the conflicts he’s covering.

Engel grew up comfortably in Manhattan as the son of an investment banker. But soon after graduating from Stanford in the mid-1990s, he dove headlong into foreign reporting, first in Egypt and then later across the Middle East. (While freelancing for Arab news outlets, he got a call that a busload of Italian tourists was massacred at a Cairo museum, offering him his first glimpse of the violence that would frame his career.)

Along the way, Engel has reached some conclusions, which he lays out in his book. For example: “These days I no longer believe there ever are truly good guys and bad guys in war, at least in the Middle East,” Engel writes. “They’re generally shades of gray.”

And this: “Although everyone in the Middle East tends to blame Washington for everything from car bombs to the weather, the United States isn’t responsible for the woes of the Middle East. But like old houses that were barely standing, Washington’s actions and missteps pushed them off their foundations and exposed the rot within, unleashing the madness of the Iraq war, the bloodbath in Syria, Libya’s post-Gaddafi anarchy, and ISIS [the Islamic State].”

Engel also recounts his harrowing five-day capture by militants after crossing into Syria in December 2012 and being abducted by masked men carrying AK-47 rifles. He initially reported that his abductors were pro-Assad shabiha, or Alawite groups of armed militia in support of Syrian President Bashar al-Assad. But the New York Times reported two years later that Engel’s captors had actually been part of a Sunni criminal gang linked to rebels opposing Assad.

“It was a total shock, but in Syria, as in all wars, strange and murky alliances are not uncommon,” Engel writes of the Times revelation, adding that “when I look back now on the decision to take that trip, I see that we were far too confident.”

The kidnapping did not stop Engel from returning to Syria to report on the war and the unremitting humanitarian crisis it has caused, but the experience did teach him important lessons about taking risks in pursuit of the truth. Engel, who recently married and had his first child, talked about the dangers of his job and of the region he has chronicled for over two decades.

The Washington Diplomat: You’re one of the very few American war correspondents whose work is readily familiar to many Americans. Now you’ve written a book cataloguing your professional adventures and close calls as a bit of a recent history and travelogue of the Middle East. Why did you write “And Then All Hell Broke Loose?” Who is your audience?

Richard Engel: I didn’t dumb it down and try to make it what they call a mass or general audience book. It is information that I thought was important to put the region into a broad context with some specific details. The book talks about 20 years in the Middle East over 256 pages. It is not an in-depth academic study. It has some history of the Middle East. What it mostly has is a new way of looking at the Middle East. I try and paint it as a perspective … through my eyes and experiences.

If they (readers) can walk away from the book with a different approach to thinking about the complex events that are happening in the Arab world, then I will be very happy. I hope that the book is for anyone who wants to pick it up.

TWD: There has been a lot of handwringing about the decline of foreign reporting in the American media. You lament in your book that you had 70 seconds on the nightly news to relate the horrifying, heartbreaking story of when 953 people died following a stampede on the Al-Aaimmah bridge in 2005 near Baghdad. Does the U.S. media devote enough time and resources to helping us understand foreign affairs — globalization, or international trade agreements or the roots of Islamic terrorism, etc.?

Engel: You will never hear me say we have enough foreign reporting. I want more and more of it. But the information about foreign policy and events in foreign countries — it’s all out there in a way that it has probably never been out there before. You have social media, people writing their own blogs, you have individuals self-publishing books. There is a lot of information out there. What is getting more difficult is finding the music amid all of the static, the patterns amid the chaos and noise. There is a lack of sometimes good information that is credible and honest. 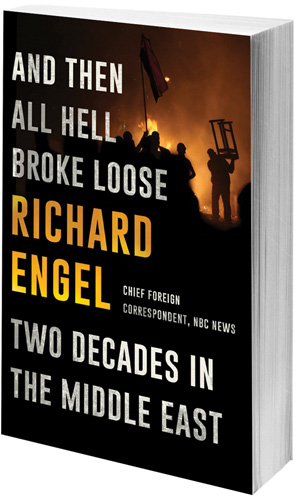 In the mass of social media and blogs and different kinds of news information, there are unsubstantiated rumors and there are deliberate plants. There are corporate-spun stories out there. I think the challenge now is not a lack of information about foreign affairs. It’s knowing what is real and genuine. How do you know what’s real and what’s been deliberately planted … by a government official or a corporation?

TWD: You earn a paycheck from one of the most powerful media organizations in the world. I’m sure you hear your share of skepticism about the corporate interests of NBC and Time Warner and how your reporting fits into that agenda, don’t you?

Engel: I work for NBC, and that is kind of the mainstream media. I produce the content of my own stories. I go out and I report stories. I’m in Iraq, or Afghanistan, or Turkey or Syria — or wherever — and I don’t have to call into the front office and say, “Hey I’m thinking about doing a story about this, that or the other.” They own the company but they don’t get into the weeds about what to write. They have other things to worry about.

TWD: Let’s talk about the arc of events you’ve covered in the Middle East over the past 20 years, which is the crux of your book. As you know, back here in Washington, the Republicans like to blame what they describe as a disastrous foreign policy under President Obama, while Democrats still insist the blame for the region’s instability lies with George W. Bush. You had a front-row seat to all of this. How do you size up the past decade and a half?

Engel: The Bush administration with eight years of direct military action destroyed the status quo and unleashed a chain of events that we are still dealing with today. The Obama administration, for what is soon to be the last eight years, has had an inconsistent policy in the Middle East: supporting the revolution in Egypt, not supporting it in Bahrain, supporting the revolution with force in Libya, not supporting it with force in Syria, even while promising to do that.

The combined impact of these eight years of military action and soon to be eight years of inconsistent action has destroyed completely the status quo and unleashed a lot of demons, a lot of the pent-up frustration — the Sunni-Shia madness, the Persian-Arab tension, the Turkish-Kurdish tension and of all of these primordial conflicts. They were, of course, not our creation — the United States did not create the Sunni-Shia conflict. But it does bear some responsibility for unleashing it.

TWD: How did Russia’s involvement in the Syrian civil war factor into that equation?

Engel: Syria has been from the beginning a proxy war with so many different groups putting their hand in the conflict — Turkey, the Kurds, who have their own nationalist aspirations, Saudi Arabia, other Gulf States, Iran, the Syrian government obviously and now Russia is very much putting its hand on the steering wheel as well. It is just one more person pulling on what had already been a tug of war in every direction.

TWD: Having covered al-Qaeda and the Islamic State (also known as ISIS), what is your view of the differences between the two?

Engel: Their model is different. Mentality-wise, there is not that much difference … and right now they don’t get along by the way. There are big rivalries and fights over leadership and who should be in charge. It’s mafia-style family stuff. The difference is in their modus operandi.

Al-Qaeda operated like a secret underground organization. It was hard to join al-Qaeda. You had to pass loyalty tests, go great distances, you had to be recommended, particularly after their camps got destroyed in Afghanistan. In the beginning it was a little bit easier, but after 9/11, it was hard to join al-Qaeda. They were underground and small in number, meeting in dark places to discuss secret plots.

ISIS operates in the open. It has its own territory and presents itself as a state. It presents propaganda videos that clearly show where the acts and atrocities are taking place. It carries out attacks and then within minutes celebrates these attacks. It has a physical space it is thriving in. It has an economy. Al-Qaeda didn’t have an economy and oil industry. Al-Qaeda had to raise money in secret … through back channels. ISIS has checkpoints and raises money and collects taxes. It’s a very different model. Mentality-wise, I think they share some very similar goals. ISIS celebrates (Osama) bin Laden and consider him kind of a grandfather figure. But there is a physical difference in their space and there is a generational difference.

TWD: Finally, after 20 years of reporting on the region, where do you think the Middle East is heading in the coming decade?

Engel: I think what is coming is a series of strong men and I think they will be embraced. If you live in Syria right now and you’re on the ground in Aleppo, it’s an unsustainable life. You can’t live like this. If people are offering simple solutions and the price is to give up your personal freedoms, I think people will do that. We can’t tell people what to do but we have to watch with caution because dictators don’t have all the answers. History of this past century has showed us that out of chaos fascist leaders emerge, and when fascist leaders emerge out of poverty, desperation and chaos, they can do really bad things for the world.