Home The Washington Diplomat June 2010 Arts of the Able 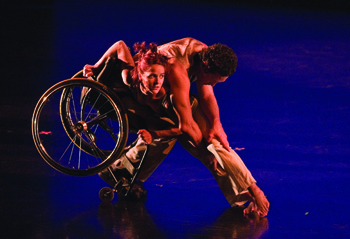 Catchy pop and punk rock are good descriptors of the sounds coming from Rudely Interrupted, the first punk rock band to have ever performed at the United Nations.

The Australian indie rock group will be giving a free concert at the Kennedy Center’s Millennium Stage on June 7. When they hit the stage, many audience members will be in for a treat.

“I want people to be surprised,” said VSA President Soula Antoniou, who helped bring the band to Washington as part of the organization’s upcoming U.S. tour. “For people who don’t know our work and aren’t thinking about what people with disabilities can do — of course I want them to be wowed.”

Here’s what she’s talking about:

The group’s bass player, Sam Beke, has Down syndrome. The lead singer was born blind and has Asperger’s, a milder variant of autism. Deafness, autism and the challenges that come with these and other disabilities are all part of the daily music grind for the six-member band. Rudely Interrupted was formed as part of a music therapy program in Melbourne, under the guidance of longtime musician Rohan Brooks (who handles guitar and backup vocals as well as managing the band).

Those preconceptions are in fact likely to be blown away by the International VSA Festival, a massive six-day event this month that will bring more than 600 artists, performers and educators from all over the world to Washington, D.C., for a wide-ranging arts showcase featuring dance, music, theater, literary readings, film screenings, workshops, lectures, exhibitions and other events at more than a dozen major venues around town.

“One of the biggest challenges is stigma, and one of the things we’re trying to do is tackle those perceptions,” Antoniou told The Washington Diplomat. “All of our displays and performances demonstrate artists purely on the merit of their work. When you look at our juried exhibitions and programs, for instance, no one knows a thing about the artists or their disabilities [when judging].”

VSA International — an affiliate of the John F. Kennedy Center for the Performing Arts — got its start more than 35 years ago, when Ambassador Jean Kennedy Smith decided to create a society for people with disabilities to learn through, and participate in, the arts. The nonprofit has changed its name several times over the years as acceptable terminology has evolved (VSA at one point stood for “Very Special Arts,” an acronym the organization has long since dropped).

With more than 50 affiliated international networks and hundreds of domestic partners, VSA serves some 7 million people every year. 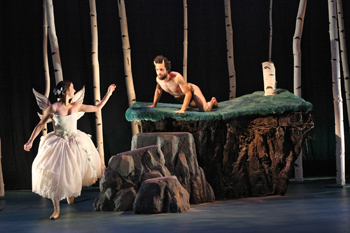 They’re people like Gregg Mozgala, who for nearly three decades lived with an uncontrollable walk caused by cerebral palsy, a currently incurable brain disorder. Mozgala one day decided to train with Tamar Rogoff, a ballet choreographer who worked with the young man for eight months. Unexpectedly, the process helped Mozgala learn to control his movements in a way no doctor had been able to do. On June 10, Mozgala will star in “Diagnosis of a Faun,” an original Rogoff dance piece commissioned by VSA for the festival that will be introduced by actress Claire Danes.

These kinds of success stories are what VSA is all about. But it’s not just the inspiring triumphs that are monumental. Equally important are the young children who realize their dreams are attainable and the adults who have those “aha” moments, as Antoniou calls them, when they discover how much can be accomplished through artistic expression.

“The arts level the playing field,” Antoniou said. “There aren’t right and wrong ways of doing things … so it’s a way for each person to develop at his or her own pace in a setting that honors who they are as individuals.”

VSA helps to create that setting through a variety of programs — everything from awards and competitions, to teaching fellowships and apprenticeships, to sponsored exhibits and productions. All of its programs are free and open to people of all disabilities, and many are tailored to the cultures of individual member countries.

And the countries represented by VSA truly span the globe, as evidenced by just a sampling of the performances on tap at the festival: The opening ceremony, for instance, will spotlight the precise yet graceful choreography of the China Disabled People’s Performing Art Troupe. “An Evening of International Dance” on June 10 features companies from Portugal and Greece. Other international highlights include: award-winning Québec vocalist Martin Deschamps; young soloist musicians from South Korea and Israel; “Gretty Good Time,” a play about a paralyzed nursing home patient visited in her dreams by a young Japanese woman disfigured by the Hiroshima bombing; the Uganda Deaf Silent Theatre performing a mixture of dance, gesture and sign language; traditional flamenco by Guatemala’s Youth Dance Company; multi-sensory installations by Japanese native Hirokazu Fukawa; the percussion-focused jam session “AfroBeats: Mali to Motor City”; the Brazilian country music band Forró No Escuro; and short theater works by Ireland’s Fishamble: The New Play Company. 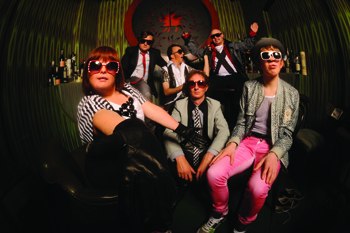 “VSA and its affiliates are opening up possibilities in the U.S. and around the world,” said Irish Ambassador Michael Collins. “As a result of VSA’s programs, artists with disabilities like the Irish playwrights who are participating in the 2010 International VSA Festival now have their talent showcased on an intercontinental scale.”

And the scale of the International VSA Festival matches the wide diversity of its participants. The culmination of years of preparation, the festival is the only event of its kind — and comes to the area just once every four or five years. This is perhaps why so many members of the diplomatic community have been key in securing the participation of artists from their countries.

The festival includes both free and paid performances in a variety of venues, including the Kennedy Center, H Street Playhouse, AFI Silver Theatre, the Shakespeare Theatre, DC Improv, Busboys and Poets, and several Smithsonian museums.

Another big part of this month’s festival is a three-day conference of nearly 70 workshops, panels and lectures with educators and policymakers from throughout the world who will share insights on how to create successful art programs that work for all people, including those with disabilities.

“The International VSA Festival will highlight excellence and ability,” stresses VSA President Antoniou. “The international range of talent and expertise that will be presented is phenomenal. Our festival will be a celebration that ensures that all people participate in the arts.”