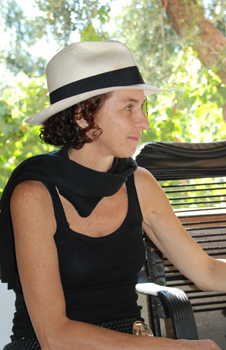 Anabelle Sielecki, wife of Argentine Ambassador Héctor Timerman, may seem like a bit of a mystery because, unlike most diplomatic spouses, she is only in Washington part time.

Anabelle Sielecki, wife of Argentine Ambassador Héctor Timerman, studied architecture but her latest venture is a wine business back in Argentina, which is part of the reason why she splits her time between Buenos Aires and Washington.

“Home is still Argentina for me,” said this fashionable mother of two daughters in their 20s, explaining that for the last two years since her husband’s posting as Argentina’s ambassador here, she has split her time equally between Buenos Aires and Washington.

“I’m here for a month and then fly home for a month,” she said. “I go back for my kids. I know they miss me. In South America, even when our children are older, our families stay in very close touch and older children may even live with their parents, as my youngest daughter has done recently. When I’m home, the girls and I talk each morning and discuss our day, usually planning to have breakfast or dinner together.”

One positive result of this grueling 11-hour commute? “I have a lot of mileage from Dulles [Airport] to Buenos Aires and back,” this frequent flier joked.

Anabelle’s close relationship and constant contact with her daughters was evident from the moment I arrived at Argentina’s residence near Dupont Circle, where she was on her cell phone describing something in Spanish while she glanced at some architectural drawings.

“I’m helping my daughter redesign this little ‘hole in the wall’ apartment where she is moving,” Anabelle, an architect, quipped. “You know, big decisions like where the door goes!

“When I am here, I have a ‘virtual office’ with my phone, computer,” she continued. “It supposedly doesn’t matter where I am, except for me, I find that it’s easier when I’m there in person. This is great for the younger generation, but for me, I would rather go out and meet someone over coffee to discuss things.”

A licensed architect in New York, Anabelle worked at an architectural firm there for several years, but after returning to Argentina, she discovered that she preferred developing properties and “putting together the whole deal, instead of acting solely as the architect.”

Anabelle began studying architecture at age 18, when, like all Argentine students, she had to choose a career path.

“In South America, you decide at 18 what you are going to be the rest of your life. And when I was 18, you had to choose from the more traditional careers such as medicine, law, architecture, engineering, economics, math and political science,” said Anabelle, noting that she dreamed of being “an incredible architect like Le Corbusier, [Ludwig] Mies van der Rohe or Frank Lloyd Wright”

But she applauds the greater variety of choices that students today have when going to college. “Now there are so many other fields. And, as we found out when my daughter was in school here at Tufts [University], with liberal arts you learn about the whole world before you have to choose your field. That’s so much better.”

Today, Anabelle’s youngest daughter Amanda is a 25-year-old art history major working on her master’s degree in communications at Universidad Austral in Buenos Aires. Jordana, two years older, has an undergraduate degree in history and international relations from Tufts University. After working as a newspaper reporter in the Boston area and then for a think tank, she went to London to earn her master’s in philosopy and public policy from the London School of Economics, later working for Foreign Policy magazine.

Journalism, in fact, seems to run in the Timerman genes. A well-known opposition journalist and broadcaster, Héctor Timerman lived with Anabelle and their children in New York City from 1978 to 1989 during his exile from Argentina’s military dictatorship (also see “Latin America Tries to Reconcile With Dirty Secrets of Its Past” in the October 2008 issue of The Washington Diplomat).

Héctor’s father Jacobo Timerman was an outspoken journalist and publisher in Argentina during the 1960s and 1970s who never hesitated to publicize the human rights violations of his government. Following a coup by his country’s military junta in 1977, he was arrested, imprisoned and tortured for exposing the atrocities of Argentina’s long-running “dirty war” — one of the darkest chapters in modern Latin American history, when an estimated 30,000 students, union leaders and other leftists opposed to the Peronist regime “disappeared.”

Only a 22-year-old student at the time, Héctor remained in Argentina as long as he could to work for his father’s release, until he was warned by the American ambassador that he should leave the country. His fiancé Anabelle stayed on to finish her architecture degree because, as she put it, “we just became so used to living in a state of fear.”

Almost two and a half years later in September 1979, Jacobo Timerman was finally released. A Jewish Ukrainian émigré to Argentina, Héctor’s father was sent to Tel Aviv, where he detailed his ordeal in the 1981 bestselling exposé “Prisoner Without a Name, Cell Without a Number,” which became a film two years later.

Meanwhile, during his own exile in the United States, Héctor followed in his father’s footsteps, building his reputation as a journalist and human rights activist. He earned a master’s degree in international affairs from Columbia University, and his articles appeared in the New York Times, Newsweek, the Nation and Los Angeles Times. He was also a co-founder and board member of Human Rights Watch in New York throughout the 1980s and director of the Fund for Free Expression in London from 1983 to 1989. When the couple returned to Buenos Aires, Héctor’s penetrating talk show earned him the nickname “the Charlie Rose of Argentina.” 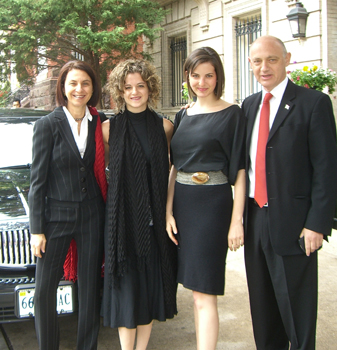 Anabelle Sielecki and her husband, Argentine Ambassador Héctor Timerman, pose with their two daughters: Jordana, a former newspaper reporter in Boston, and Amanda, who is working on her master’s degree in communications at Universidad Austral in Buenos Aires.

To this day, Héctor keeps a framed letter by his bedside that reads: “With great regards to the Timermans, father and son, for their outstanding dedication to the cause of human rights” — signed by then U.S. President Jimmy Carter and Patricia Derian, the first undersecretary of state for human rights.

“This letter is with me, wherever I live,” said the ambassador. “Jimmy Carter saved my father’s life. I have a very strong feeling for him, as does everyone in Argentina. The Carter administration made the difference in Argentina.”

“We never thought [Héctor] would be called to be ambassador here,” Anabelle added. “We were surprised even though he served in New York as Argentina’s consul general from July 2004 to December 2007.”

Héctor, who arrived in Washington in 2008, said the posting demonstrates how much his homeland has matured. “The fact that I came here first in exile and now that I am back as the ambassador of the same country shows the change in politics in Argentina. Now we live in a strong democratic country where human rights and popular representation are not even discussed anymore.”

Today, the economy is more on the minds of most people in Argentina — including Anabelle, who runs a wine business back home, which is also part of the reason why she returns to Buenos Aires so often.

“When the country’s economy collapsed in 2001, everything came to a stop. I had an opportunity to get into the wine business. My three brothers and I invested in a boutique vineyard with a well-known winemaker. The original trench irrigation that the Incas invented is still in this old vineyard. We choose to rename the vineyard Mendel Winery, in honor our father Mendel Sielecki,” Anabelle explained, proudly noting that, “Malbec wine from our vineyard is top quality and has a 94 Parker wine rating.”

“You know, I’m a city person, that’s my background. But with the vineyard, you produce something out of the earth,” she added, clearly intrigued by her newest career. “I thought at the time that it was nothing — that it would take no time. Well, what I’ve learned is that nothing you do is ever part time. We do everything. One hat I wear is to design the label; another hat, to design the cork; then I become the communications department and the promotion ‘department.’

“You know how it is — when someone calls and asks for the marketing department, you say, ‘Okay, just a moment,’ as if you had a marketing staff, and then you become that person!”

As an example of just how small the world is, Anabelle recounted the story of a Washington couple who lived around the corner from the Argentine Residence and visited the Mendel Vineyard without knowing the connection to their neighbor. After the neighbors, Rick and Myrna Toren, learned that one of the owners of the vineyard was the Argentine ambassador’s wife in Washington, they made sure to bid on a dinner at the residence during an auction at the American Heart Association’s “Heart’s Delight Wine Tasting” event in 2008. They won and showed up at Anabelle’s door for the dinner, surprising their hostess with this story and a lovely framed montage of their wine adventure in her vineyard. To Anabelle’s delight, the couple made the winning bid again last year and showed up for a repeat get-together.

“The embassy is a great platform to promote Argentine wines, and I take great pride in serving the finest Argentinean wines to our guests along with telling everyone how spectacular Argentina really is,” Anabelle said. “People may know about Buenos Aires and dancing tango but there is so much more — mountains with dramatic waterfalls, butterfly excursions and fly fishing, glaciers and the pampas [lowlands], the highest vineyards in the world and the wine country of Mendoza, the beautiful lakes region and big ranches, and lots and lots of meat to eat!”

As much as she loves the natural awe of Argentina, as a student of architecture, Anabelle also clearly appreciates city life, explaining that she initially missed New York City when she moved to D.C. two years ago.

“Now I realize after getting to know Washington that you can have a better quality of life here and people are warm and friendly. Everyone in New York is on such a tight schedule. Even when you call dear friends they say they can’t meet you for three weeks. In South America, we call each other and plan to get together in two hours. Washington is more relaxed than New York, the suburbs are closer and you use the car. I wouldn’t mind driving to Bethesda for dinner but in New York, I wouldn’t think of going out to Scarsdale.”

Here in Washington, she also enjoys simply having more room. “For years, I had this reoccurring dream that in my New York apartment I found an extra room, like a secret garden. In New York, you don’t choose where you live, because you are happy to find anything reasonable.

“Now that I understand Washington,” Anabelle continued, “I especially appreciate [Pierre] L’Enfant’s incredibly well-planned city,” which she said allows for the “institutional mega-blocks of government buildings” alongside cozy neighborhoods like Georgetown and open green spaces. Anabelle noted that she especially relishes riding her bike around town and escaping to Thompson’s Boathouse, where she then rows along the Potomac River.

“I go as often as I can,” she said. “What I can’t get over is that if you row for 40 minutes upstream and under the Key Bridge, you feel totally transported to another place — you feel like you’re in the middle of a jungle. And when you row back, you see the Watergate, the Kennedy Center and the monuments, and you know you’re in an important city.”