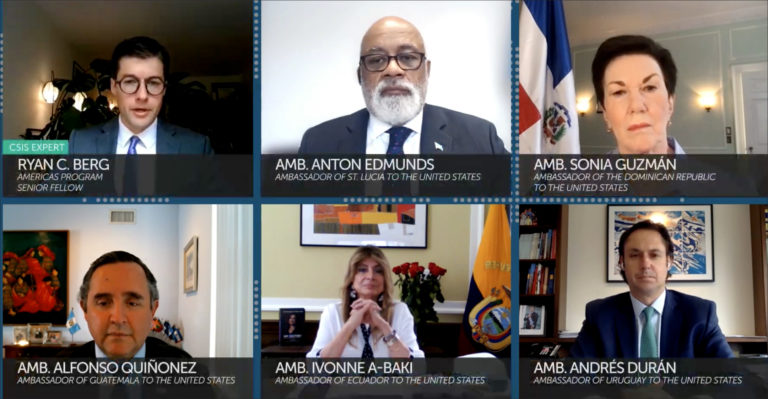 On Aug. 17, 1961, heads of state from throughout the hemisphere met at the Uruguayan beach resort of Punta del Este to launch President John F. Kennedy’s Alliance for Progress—a comprehensive 10-year plan known in Spanish as “Alianza para el Progreso” that sought to strengthen US diplomatic and economic relations with Latin America.

Among its goals: an annual 2.5% increase in per-capita income; elimination of adult literacy by 1970; price stability; more equitable income distribution; sweeping land reforms; and $20 billion of US investment in the region within one decade.

“We propose to complete the revolution of the Americas, to build a hemisphere where all men can hope for a suitable standard of living and all can live out their lives in dignity and in freedom,” Kennedy had declared five months earlier. “To achieve this goal, political freedom must accompany material progress … Let us once again transform the American Continent into a vast crucible of revolutionary ideas and efforts, a tribute to the power of the creative energies of free men and women, an example to all the world that liberty and progress walk hand in hand.”

Six decades later, it’s clear that many of JFK’s lofty dreams never materialized. Even though nearly all countries in Latin America and the Caribbean are democracies today—with the obvious exception of Cuba, and Venezuela and Nicaragua to a lesser extent—income distribution is as unequal as ever, and the COVID-19 pandemic is erasing years, perhaps decades, of progress in education, healthcare and women’s rights.

To assess the current situation, five Washington-based foreign ambassadors convened virtually on Aug. 16 for a webinar hosted by the Center for Strategic & International Studies (CSIS).

Sonia Guzmán, daughter of her country’s late president, Antonio Guzmán—who ruled from 1978 to 1982—has been the Dominican ambassador here since August 2020.

“We are at a vital moment in the history of the Western Hemisphere,” she said. “Latin America and the United States have to find an effective way to recover from the pandemic and to address fundamental political and economic challenges. We are inescapably bound together by history, geography, culture and values. Our people have the common desire to fight in the defense of human rights and freedom.”

Guzmán said regional security depends on sustained economic development, a stable democratic system, and resilience in the face of environmental degradation. That, she said, can be done only with democratically elected governments and societies untainted by corruption.

Yet she warned that “even in our own neighborhood,” countries have allowed democracy and the rule of law to deteriorate.

“This should concern the United States as much as it concerns other democracies in the region,” she said. “If we want to talk about regional engagement and how to deepen the relationship between the US and Latin America, we need to move beyond simply calling it a strategic relationship. We need to think of solutions that can amplify the gains our countries have made in economic development, by maintaining and expanding favorable conditions for trade and job creation.”

The pandemic, which continues to cause thousands of infections throughout Latin America every day, proves that countries cannot be completely safe on their own.

“Equally, one country alone cannot protect itself from the catastrophic effects of climate change, or the loss of freedom and democracy,” she said. “We are really in this together.”

When it was her turn to speak, Ivonne A-Baki—Ecuador’s veteran ambassador (she also represented her country in Washington from 1998 to 2002)—got straight to the point.

“The Alliance for Progress was designed to improve US relations with Latin America, but its success was marginal. It certainly failed in its effort to foster democracy in Latin America,” she said. “By the 1970s, 13 governments were under military dictatorship.”

While that’s certainly not the case today, she warned that “we need to prevent democracy from backsliding” and pointed to Ecuador as an example of what to avoid; from 1996 to 2005, three constitutional presidents were overthrown: Abdalá Bucaram, Jamil Mahuad and Lucio Gutiérrez.

Considering its chaotic history, said A-Baki, analysts were surprised to see the election and later peaceful inauguration of Guillermo Alberto Santiago Lasso Mendoza as Ecuador’s 47th president in May 2021, marking a transition to the country’s first center-right government in nearly two decades.

“Our recent electoral process proves that if leaders commit to democracy, elections can be orderly and transparent, like we saw,” she said. “While other countries are seeing an increase in populism, Ecuador’s commitment to democracy is unwavering. We cannot afford to lose more precious time.”

Indeed, Ecuador has looming problems—and has been hit badly by the COVID-19 pandemic. At one point in July 2020, its mortality rate from the disease was an astounding 8.5%, one of the highest in the world.

“On top of traditional challenges like election fraud and corruption, the advent of technology has also brought about a growth in misinformation. Our countries have few tools to respond, and COVID-19 has exacerbated long-lasting economic inequalities, pitting those who can work remotely against the working class and fueling further unrest.”

With more than 18 million inhabitants, Guatemala is by far the largest and most populous of Central America’s seven countries. Its ambassador in Washington, Alfonso Quiñonez, noted that the two factors which spurred Kennedy’s Alliance for Progress into being 60 years ago were Latin America’s deteriorating relations with the US and the alarming rise of communism.

“We may be having a similar situation right now,” Quiñonez said, in a reference to China, which has been making inroads in Latin America, particularly with regard to the supply of vaccines to fight COVID-19.

In fact, most vaccines in the region are now sourced from Beijing, despite a Chilean study which found that China’s Sinovac was only 54% in preventing the spread of coronavirus.

“The narrative and messaging play a very important role in this relationship, and in certain cases, the region feels that the US is somehow patronizing or condescending—or is critical of our realities,” said Quiñonez. “And I think that perception impacts the crafting of a joint hemispheric agenda.”

Quiñonez recalled a professor who once told him that the issues driving Latin America’s relationship with the United States resembled Einstein’s famous theory of relativity, E=mc2—except that in this case, the “E” for energy is oil, the “m” stands for migration, and “c2” represents Cuba, cocaine or crime. “And today, we can add China to that equation,” he said.

In Guatemala’s case, he said, “we want to promote more investment, take advantage of a disruption of value chains and nearshoring, combat climate change and improve our infrastructure. But we are not naïve, and we understand that the conversation also has to include other issues like rule of law, drug trafficking, organized crime and immigration.”

Representing the only English-speaking country on the panel, Ambassador Anton Edmunds of St. Lucia said the hemisphere’s shared priorities of today are the same as they were in 1961: economic growth and income equality.

“Access to healthcare is really one that jumps out as a result of the pandemic, as is education,” he said. “In the Caribbean, we have to be much more able to produce educated folks to be able to compete globally. I think the biggest issue is how do we get there.”

St. Lucia, with a population of around 184,000, has a particularly warm relationship with nearby Venezuela. Earlier this month, the island’s new government announced that St. Lucia would withdraw from the Lima Group and restore its ties with Venezuela’s Maduro regime.

“The United States is no longer the onmnipresent entity within the region,” he said. “And for some governments, the US is no longer this benevolent friend. Quite frankly, it takes years for US policy to be developed, and for countries in the Caribbean—especially those of us with a long history of political stability—we’re finding that the agenda tends to focus on the lack of democracy, which is not an issue we face. At time, it has sucked all the air out of the room.”

Back in 1961, when the Alliance for Progress was inaugurated at the Uruguayan resort of Punta del Este, said Durán, per-capita GDP in Latin America was about one-fourth that of the United States, while Latin America as a whole accounted for about 7.5% of global GDP.

“Today, it’s striking to see that those percentages are the same. About 20% of our trade is with the US, and it’s heavily concentrated in Mexico. Relative to other countries, the picture is worse,” said Ambassador Andrés Duran of Uruguay, noting the prosperous economies of New Zealand, South Korea, Finland, Israel, Singapore and Ireland.

“We were not far from those countries 60 years ago, but today, our per-capita income gap with them is huge,” he said. “Overall, these numbers show a picture of stagnation. There’s not a single country in the hemisphere, other than the United States and Canada, that’s a developed nation—not in 1961, and not today. We are obviously living in times of tremendous difficulty, with a drop in FDI like we haven’t seen in decades.”

Durán, whose Missouri-sized country of 3.5 million is among the smallest in South America, urged US leaders to recognize the region’s diversity.

“Every attempt for a comprehensive agenda that underestimates the specific needs of each country is most likely to fail. We need to work on customized solutions,” he warned. “Development is, and will continue to be, a complex challenge for our region. We need better market access, and better conditions for investment.”