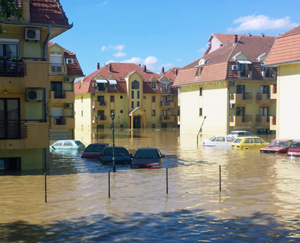 Diplomats from three former Yugoslav republics that once waged war against each other are banding together to raise money in the wake of the worst flooding to hit the Balkans in more than a century.

The flooded city of Obrenovac near Belgrade, Serbia, was evacuated on May 19. Serbia, a European Union member candidate, has said the damage from the May floods exceeded 0.64 percent of the country’s GDP, meaning it can apply for help from the EU Solidarity Fund.

Over three days in May, a cyclone named Tamara dumped three months’ worth of rainfall over Bosnia and Herzegovina, Serbia and Croatia, leaving dozens dead, a million people directly affected, more than 100,000 homes destroyed, and billions of dollars in damage.

On June 5, envoys from the three countries spoke in D.C. at an event organized by the Turkic American Alliance. The reception, which attracted about 40 dignitaries and public officials, left little doubt about the desperation felt by these small, struggling nations — and the sense that the rest of the world isn’t paying much attention to their plight.

The torrential floods were the worst in the region since recordkeeping began 120 years ago, triggering thousands of landslides and possibly exposing some of the estimated 100,000 unexploded landmines left from years of war. In fact, the flood damage costs are likely to exceed even those caused by the ethnic wars of the 1990s following Yugoslavia’s breakup — conflicts remembered for the horrors of ethnic cleansing, rape and crimes against humanity in which an estimated 140,000 people died.

Both Bosnia and Serbia have opened talks with the 28-member European Union to support reconstruction efforts. The government of Serbia, a candidate for EU membership, has said the damage from the floods exceeded 0.64 percent of the country’s GDP, meaning it can apply for help from the EU Solidarity Fund.

“All our embassies and consulates are actively looking for aid for our countries,” said Vladimir Jovicic, deputy chief of mission at the Serbian Embassy in Washington, following a video presentation on this latest humanitarian disaster to strike the Balkans. 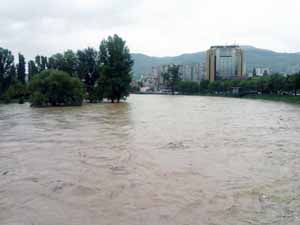 In May, a cyclone named Tamara dumped three months’ worth of rainfall over Bosnia and Herzegovina (seen above), Serbia and Croatia, leaving dozens dead, a million people directly affected, and billions of dollars in damage.

Jovicic said that in Serbia alone, 24 people were killed in the floods and 38 are still missing. More than 32,000 Serbs were evacuated as torrents of water swelled the country’s rivers and tributaries. In all, roughly 20 percent of the population was impacted.

“The United Nations, European Union and World Bank are working to establish some precise estimates of the consequences, and we are hoping in the next few weeks to have those estimates,” he said. “But preliminary numbers show damage of up to €2 billion just for Serbia. And Bosnia may be hit even harder.”

Jovicic said some 3,000 kilometers of roads and highways have been damaged or destroyed, not to mention more than 200 bridges and thousands of dwellings. In addition, between 75,000 and 83,000 hectares of arable land were flooded.

“Some businesses have been completely washed away or seriously damaged,” he said. “In our agriculture sector, which is roughly 10 percent of our GDP, we will probably be able to cover our own needs, but exports will be nonexistent.” 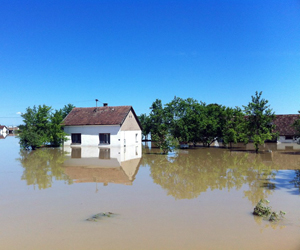 Although Croatia was not as Serbia and Bosnia by the recent Balkan flooding, localities such as Gunja still experienced record rainfall.

He added that Serbia’s mining industry will incur losses of at least €500 million, because coal mines have been ravaged and coal-burning power plants will see output drop by 40 to 50 percent. An electric-generating facility at Obrenovac, which supplies half of Serbia’s power, was saved, though the town itself was completely submerged by the Kolubara River.

Jovicic is also worried about contaminated drinking water and the coming summer, which will bring high temperatures and the risk for infectious diseases to spread.

Meanwhile, the American Red Cross has contributed $400,000 to support flood relief efforts in the Balkans. 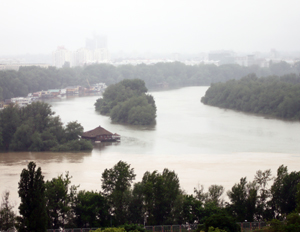 Floodwaters rise at the confluence of the Sava and Danube rivers in Belgrade, Serbia, which, along with its Balkan neighbors, recently experienced the worst flooding in more than a century.

“The floodwaters are receding, but 40 percent of Bosnia was under water at one point. Now we’re conducting an ongoing assessment of longer-term needs,” said Eric Berisa, a Red Cross official in Washington. “In Serbia, efforts were concentrated on sheltering…. Since Croatia was not as significantly affected by the flooding, it has been involved in response efforts, but at this point has not requested international assistance.”

“Croatia was the least affected of the three countries, so we were more or less able to help ourselves and help our neighbors who fared much worse,” said Mario Skunca, political secretary at the Croatian Embassy. “We were lucky that it was really only limited to the eastern part of Croatia. Still, 50 percent of the crops and livestock in this area will be affected. In the medium and long term, all three countries will need help.”

But the one that appears to need the most help right now is Bosnia and Herzegovina.

An estimated 25 percent of Bosnia’s 4 million inhabitants have been affected by the flooding. In addition, many of the more than 9,000 landmines left over from Bosnia’s bruising 1992-95 war with Serbia have been dislodged, along with the signs indicating where they were buried.

“Nobody remembers anything like this ever happening before. It is really a catastrophic situation,” Jadranka Negodic, Bosnia’s ambassador to the United States, told The Washington Diplomat. “Apart from the flooding, there were more than 2,000 landslides, and people lost not just their homes but their fields too. Everything is wiped away. Some people said this is worse than war, because after the war, they came back and found the ground of their houses, but now there’s no ground at all.”

Negodic, who has been Bosnia’s envoy in D.C. for the past two years, said “the immediate danger now is infections, since thousands of animal corpses are still floating, and there’s a lack of drinking water.”

Yet the fact that she can sit down with her Serbian counterpart and discuss the disaster in a friendly, courteous way is not unusual at all, Negodic said. 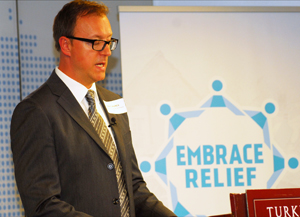 Mario Skunca of the Croatian Embassy speaks at a June 5 event to raise awareness of the Balkan flood devastation.

“This is proof that all differences between peoples are political,” she told us. “The war ended in 1995. This is 19 years later, and life goes on. I don’t want to say that people forgot what happened, but they’re more interested in the future. The past shouldn’t be an obstacle.”

She added, “All these countries have the same foreign policy goals. We are all heading in the same direction, and slowly we are showing more readiness to cooperate. The floods showed that when a tragedy like this strikes, it affects all people equally — Serbs, Bosnians and Croats. There were so many examples in Bosnia of how this disaster helped people put politics aside to help each other, regardless where they lived.”

Negodic said she’s working with Bosnian communities in the United States to raise money for flood relief, especially the community in St. Louis, Mo., which is home to 70,000 Bosnians.

The disaster has attracted some attention. Angelina Jolie, whose film “In the Land of Blood and Honey” was an interethnic love story set against the atrocities of the Bosnian war, gave $50,000 for Red Cross flood relief efforts in the Balkans (see our story on the film in the February 2012 issue of The Washington Diplomat). Serbian tennis star Novak Djokovic, who had just won the Rome Masters in Italy, donated his entire cash prize of about $750,000 for the cause. He also upbraided the international media for neglecting the story of the floods for days (even now coverage is relatively scarce). 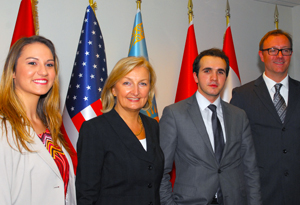 From left, Lamija Silajdzic, program assistant at the Turkic American Alliance; Ambassador of Bosnia and Herzegovina Jadranka Negodic; Mustafa Ozdemir, local representative of Embrace Relief; and Mario Skunca, deputy chief of mission at the Embassy of Croatia, attend a June 5 event in D.C. hosted by the Turkic American Alliance to raise awareness of the recent flood devastation in the Balkans.

Meanwhile, the Pentagon airlifted 26 tons of humanitarian aid to hard-hit areas in the Bosnian capital of Sarajevo, although assistance from the U.S. government has so far been paltry. The onus seems to be on the European Union and World Bank for now — and Serbia and Bosnia, in particular, both of which had been struggling long before the floods, could use all the financial help they can get.

Recovery is especially complicated by Bosnia’s 44 percent unemployment rate — one of the highest in Europe. Serbia isn’t faring much better. Its economy never really recovered from the global sanctions during the 1990s, and the country is plagued by massive corruption and mismanagement. Officially, Serbia’s jobless rate is 20 percent, but it is believed to be much higher.

“Our economies were growing at 1 or 2 percent a year. Donations will be able to cover 20 to 25 percent of our needs, but what about the rest?” asked Serbia’s Jovicic. “We shouldn’t be left alone to cope with the elements. The keyword should be donations, but also rebuilding and re-establishing industry. That’s the only way we can have long-term stability.”