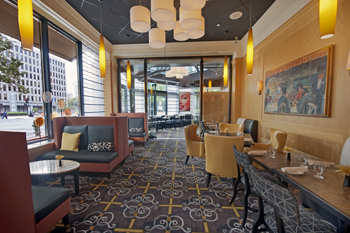 It’s funny how many similarities there are between cherry blossom season and choosing a new pope.

Take this similarity: In Rome, locals rub shoulders with huge crowds of tourists from around the world in Saint Peter’s Square, watching for white smoke to rise from what’s probably the most famous chimney in the world to signal the election of a new pontiff.

In Washington, meanwhile, throngs of locals and tourists flock to the National Mall and Tidal Basin to admire some of the most famous cherry trees in the world, checking them for signs that they have reached “peak bloom.”

Another parallel is that nobody knew when the conclave of cardinals would elect a pope, just as no one knows exactly when the cherry blossoms will be at their finest. Yes, National Park Service horticulturalists go out on a limb every year and say, around a month in advance, when they think “peak bloom” will be. This year, they originally pegged it in the period between March 26 to 30 but later revised it to April 3 to 6, although with cold temperatures and even snow at the tail end of March, the buds may hide a bit longer.

The 21 M Lounge at the St. Gregory Luxury Hotel and Suites

When we asked Hector Torres, general manager at the Beacon Hotel and vice president of sales and marketing for Capital Hotels & Suites, if the official peak prediction is when out-of-towners should head to Washington, his answer was an adamant no.

“It’s almost comical but whatever the prediction for the peak is, is when it’s likely not to be,” Torres said. But it doesn’t really matter, he added.

“There’s a two-week span when the blossoms are at their most magnificent, and there are enough things to do in Washington — besides the blossoms — that everyone is guaranteed to have a wonderful time,” he said.

Exactly what visitors choose to do in D.C. — other than looking in awe at the century-old cherry trees as they turn a pastel shade of pink — depends on them, what their interests are, and whom they ask for advice.

Torres would advise what he described as “the younger, hipper crowd” to head to the Adams Morgan area, the U Street Corridor, Dupont Circle or Penn Quarter-Chinatown for the vibrant nightlife and array of restaurants. Ben’s Chili Bowl, which is famous for its half-smokes and its clientele, including President Barack Obama and comedian Bill Cosby, is across the street from the U Street Metro and is must-do for tourists.

Torres said he did not feel qualified to recommend places that would suit the younger crowd, but he did advise checking out the site www.dcclubbing.com before heading out on the town.

The “more adult, more sedate crowd” will doubtless linger under the cherry blossoms and in the evening could mix it up with a theatrical performance in D.C.

“The Kennedy Center is no longer the only place to go for theater,” said Torres, rattling off a list of smaller theaters including the Woolly Mammoth at 7th and D Streets, NW; Ford’s Theatre on 10th Street, where President Abraham Lincoln was assassinated; and Arena Stage, which Torres described as “a world-class theater complex.” Arena Stage is located near the Waterfront Metro station in Southwest Washington.

Chiaki Adams, the concierge at the Ritz-Carlton in D.C., took time between phone calls with guests seeking advice on where to go, to give The Washington Diplomat some tips for where to go. 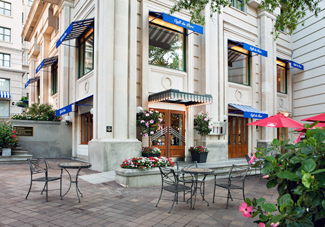 And like Torres, Adams says it all depends on the person, their age, whether they’re traveling with little ones or solo, and what their budget is.

“A lot of people don’t want to wait in line but want to visit everything,” she said.

“If money’s no object, a lot of things can happen. But if they’ve come as a family and are paying on their own and not a multimillionaire … I say they will either have to wait in line, or send Mom out to pick up passes for the National Bureau of Engraving when she goes on her morning run” to cut the wait down a bit.

Adams, who’s originally from Japan but has been in Washington for nearly 30 years, also has a few favorite things to do in D.C. that are off the beaten path.

One is the Hillwood Estate, Museum and Gardens, founded by the late Marjorie Merriweather Post, an heiress who “loved unique and beautiful things.”

“The older generation especially would enjoy seeing the collection of portraits and paintings from the Romanov era,” said Adams, referring to the dynastic family that ruled Russia from the 1600s until the turn of the 20th century.

An exhibition titled “Pageant of the Tsars,” showing the lavish albums chronicling the over-the-top pomp of the Romanov coronations, runs at Hillwood until June 8.

But that’s not the only reason to go to the Hillwood, says Adams. Visitors can also “learn about a fascinating socialite” and visit the sumptuous gardens, complete with the kitsch lawn furniture favored by Merriweather Post.

A record 66,000 people visited Hillwood last year, “but a lot of people miss all that it has to offer because they go to the Smithsonian” museums on the National Mall instead, said Adams.

The Hillwood Estate got 192 “excellent” and 36 “very good” ratings on Trip Advisor, and no negative ratings. Run as a nonprofit, Hillwood charges a fee to enter unless you’re under 6 or a member.

For the younger set and the young at heart, Adams recommends a guided tour of some of the eateries on Capitol Hill with DC Metro Food Tours.

“A lot of young guests want to visit ‘neighborhoods,’ not just Georgetown and Dupont Circle. I picked the tour of Capitol Hill for the great potential for neighborhood color,” she said.

Adams went on the tour herself and was pleasantly surprised to be taken off the main drag in Capitol Hill — Pennsylvania Avenue — and introduced to hidden gems on Barracks Row, around Eighth Street in Southeast Washington. 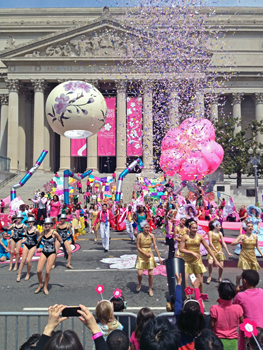 The three-week National Cherry Blossom Festival features an array of events for the more than 1 million people who visit D.C. to watch the pink flowers bloom.

“Not many guests go there,” she said.

The tour took in four established restaurants, with the gastronomic tourists enjoying a small meal at each before moving on to the next one.

“By the time you’re finished, you’re full and you’ve learned about the culture of Capitol Hill, the residents, how the neighborhood has changed.”

To burn off the effects of the dining tour, which takes place during the slow hours at the restaurants —3 to 6:30 p.m. — Adams recommends heading to the other side of town to the Thompson Boat Center in Georgetown to rent a kayak, canoe, rowboat or even a bicycle. Those red bikes on the corners near Metro stations, you have to buy an annual pass for.

The Willard InterContinental Washington, meanwhile, has packages for history buffs and cherry blossom gazers. On the heels of Steven Spielberg’s award-winning film “Lincoln,” the hotel is offering a “Lincoln at the Willard” package that is available year-round and features a weekend night in a deluxe room where President Abraham Lincoln and his family stayed in 1861 just before they took up residence a the White House; breakfast at Café du Parc; valet parking; and a tour of the cottage where Lincoln spent a fair amount of time during the Civil War.

Lincoln Cottage is, like many of the places that are recommended for a visit in this article, off the beaten path, in the Petworth area of Washington. The Willard provides transportation to and from the cottage, which has only been open to the public since 2008.

For blossom buffs, the Willard offers “Cherry Blossom Afternoon Tea” in its Peacock Alley with pastries and Japanese-inspired savories, all against the visual backdrop of blossoms and the “soothing sounds of koto, a traditional Japanese stringed harp-like instrument” playing in the background. Reservations for afternoon tea can be made by calling (202) 637-7350, or for the Lincoln package at (202) 628-9100.

The cherry trees that burst into bloom each spring in D.C. were a gift from Mayor Yukio Ozaki of Tokyo to the city of Washington, D.C. This year marks the 101st anniversary of the first trees’ planting by first lady Helen Taft and Viscountess Chinda, the wife of the Japanese ambassador in 1912.

The first cherry blossom “festival” was held in 1927, when a group of American schoolchildren re-enacted the planting of the first trees. It has grown over time and today attracts more than 1 million visitors to D.C., who rub shoulders with the many locals who are rightly proud of the capital’s springtime flora.

This year, the National Cherry Blossom Festival runs from March 20 to April 14 and features everything from a kite festival on the National Mall to special events at the Smithsonian museums.

“They try to spread events over the three weeks so that everyone can get out and enjoy the cherry blossoms,” said Adams of the Ritz-Carlton, who recommends the National Building Museum, near the Judiciary Square Metro, for families.

“They do something every year for the festival, but they’re worth taking the kids to any time during the year. I always recommend the National Building Museum to families.”

But the real cherry on the festival cake, as it were, is the 53rd annual Sakura Matsuri Japanese Street Festival on the last day of the three-week bloom watch. For $5 for those over the age of 12, visitors to the festival can eat, dance, watch a kimono fashion show, meet Japanese NASCAR racer Akinori Ogata, and watch a shodo group as it dances and draws calligraphy on the street at the same time.

And for those who don’t want to wait in line to get into the festival, tickets are available online at www.sakuramatsuritickets.com.