Home The Washington Diplomat May 2013 Can Dutch Ingenuity Help Save U.S. from Future Natural Disasters? 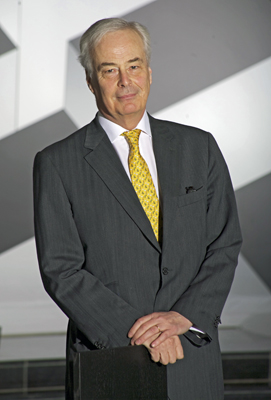 In 1626, Dutch explorers — as generations of American schoolchildren had been taught — purchased Manhattan from the Indians for $24 worth of beads and trinkets. While it’s unknown how much truth there is to this 19th-century urban legend, few people doubt the enormous influence the Netherlands has had on this country over the ensuing four centuries.

In fact, New Amsterdam was a 17th-century Dutch colonial settlement on the southern tip of Manhattan that served as the capital of New Netherland until English forces seized it in 1664 and renamed it New York (in honor of the Duke of York).

Today, despite its small size, the Netherlands is the largest single recipient of U.S. foreign direct investment in the world, and the third largest foreign investor in the United States. More than 850 Dutch companies operate here, with bilateral trade supporting an estimated 680,000 American jobs in 2011 (see related story).

This past March, top Dutch officials visited their former colony of New York to share the country’s well-known expertise in water and disaster management. The trip came in the wake of last year’s Hurricane Sandy, which killed 147 people along its path — including 72 in the mid-Atlantic and Northeast — and caused an estimated $50 billion in damages.

That made the freakish superstorm the second-most expensive weather event in U.S. history after Hurricane Katrina. It was so deadly that the World Meteorological Organization has since retired the name “Sandy” from its list of Atlantic storm names.

“I went to New York City a week after Sandy,” said Dutch Ambassador Rudolf Simon Bekink, who saw firsthand the devastation caused by Sandy’s 14-foot storm surge. “By then, most of the water at the lower end of Manhattan was gone, but shops were still closed and you could still see where the flooding had happened. I talked to someone who was still living in a hotel because his apartment was on the 50th floor and he had no electricity at home.”

Bekink, who served as his country’s ambassador to China for four years before coming to Washington last July, said that when it comes to water-borne disasters, the low-lying Netherlands can teach us a thing or two. (In fact, Dutch experts advised their U.S. counterparts in the Gulf Coast following Hurricane Katrina.)

The ambassador was only two and a half years old when a fierce North Sea storm barreled into the Dutch coast on Feb. 1, 1953, flooding the dikes, killing nearly 2,000 people, and destroying 500,000 acres of productive farmland.

“Within weeks of the storm, a government commission issued what came to be known as the Delta Plan, a set of recommendations for flood-control measures,” James Surowiecki wrote in the Dec. 3, 2012, issue of the New Yorker. “Over the next four decades, the Dutch invested billions of guilders in a vast set of dams and barriers, culminating in the construction of the Maeslant Barrier, an enormous movable seawall to protect the port of Rotterdam. Since the Delta Plan went into effect, the Netherlands has not been flooded by the sea again.”

In effect, said Bekink, the Dutch have learned how to make peace with their unique topography.

“It’s not necessarily about fighting water, it’s about living with water. And our idea is to share that experience with HUD, especially in the post-Sandy period,” he explained, referring to the Department of Housing and Urban Development. “We are in close contact with U.S. authorities, and not only in New York and New Jersey, but also areas affected by Katrina.”

He added: “In our case, the emphasis is more on prevention. That’s the main idea behind the Delta Plan — that it should never happen again. I haven’t seen that yet in this country, though Sandy was a wakeup call for the Northeast.”

That’s precisely why the White House rolled out the red carpet for Dutch Environment and Infrastructure Minister Melanie Schultz van Haegen when she recently visited Washington, D.C., New York and New Jersey — including Hoboken and Jersey City, two cities that were badly flooded during Sandy’s rampage over the Garden State.

She also spoke before a special United Nations session on water and disaster.

During her visit, van Haegen signed a memorandum of understanding with HUD Secretary Shaun Donovan to share strategies and best practices in urban development, water management and climate resilience. 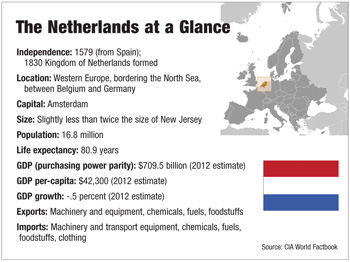 To make that happen, the U.S. and Dutch governments have agreed to organize bilateral conferences, seminars, forums, workshops, prizes, competitions and planning meetings — ideally at least twice a year, once in each country — as well as joint research studies and regular exchange of information, program evaluation reports and monitoring.

“The sea is rising, and these things do happen,” Bekink warned. “We are creating wetlands where excess water can be temporarily stored, and giving back to nature. That’s part of our idea of living with water and not fighting it, though perhaps that’s not the solution for Manhattan.”

Bekink pointed out that 70 percent of his nation’s GDP is earned in areas that are actually below sea level.

“Our two nations have much to learn from each other about finding innovative solutions to age-old shared problems,” Donovan later said in a press release. “The Dutch are no strangers to the forces of nature and I’m certain we can benefit from their experience in disaster mitigation, infrastructure management and a variety of approaches to sustainable community development and planning.”

That we need a Delta Plan of our own is convincing, though according to the New Yorker article, “meaningful disaster-prevention measures will certainly be expensive: estimates for a New York seawall range from $10 billion to $20 billion. That may seem unreasonable at a time when Washington is obsessed with cutting the federal deficit.”

Yet Surowiecki warns that inaction can be even more expensive.

“After Katrina, the government had to spend more than a hundred billion dollars on relief and reconstruction — and there are good reasons to believe that disaster-control measures could save money in the long run,” he wrote. “A 2005 independent study of disaster-mitigation grants made by FEMA [Federal Emergency Management Agency] found that every dollar in grants ended up saving taxpayers $3.65 in avoided costs.”

Bekink, 62, knows the United States well. Born and raised in Assen, a town of 67,000 in the northeastern Netherlands, he attended the University of Groningen, earning a master’s degree in economy. Shortly after joining the Dutch Foreign Service, Bekink was sent to Washington 30 years ago to be first secretary at the embassy here.

“I was 32 and the youngest kid on the block,” recalled the diplomat, who served in Washington from 1982 to 1986 before moving on to bigger and better assignments in places such as France and Ghana. Bekink’s first ambassadorship was Sweden (2000-04), followed by Belgium (2004-08), China (2008-12) and finally Washington, again.

“I’m not complaining at all,” he said. “It’s fascinating to be here. This is the pinnacle of my career. I love the United States.” 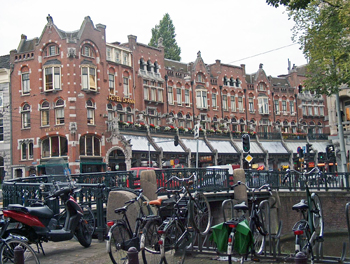 Bicycles are a primary means of transportation in Amsterdam. In U.S. cities such as Austin and Washington, D.C., the Netherlands Embassy has held ThinkBike workshops to help officials develop sustainable solutions to urban growth. “In the Netherlands, bicycle riding is a crucial element in our system of sustainable transportation,” says Dutch Ambassador Rudolf Simon Bekink.

Bekink says the high point of his career was meeting President Obama in the White House to present his credentials and being a witness to the 2012 elections. Last October, he joined 42 of his diplomatic colleagues for a State Department-sponsored trip to Arkansas, where he met former President Bill Clinton in Little Rock (also see “Arkansas Odyssey: Ambassadors Experience the Natural State” in the January 2013 issue of The Washington Diplomat).

In January, the Netherlands grabbed its own worldwide headlines when Queen Beatrix announced she would abdicate on April 30 — ending the reign of one of Europe’s longest-serving monarchs and clearing the way for her eldest son, Crown Prince Willem-Alexander, who just turned 46, to become Holland’s first king in more than a century.

Willem-Alexander — whose investiture is being celebrated by the embassy in D.C. with a reception and gala dinner — just happens to be an expert in water management. He’s chairman of the United Nations Advisory Board on Water and Sanitation and has spoken frequently about the correlation between global warming and the increasing frequency of water-related disasters around the world — from floods in Bangkok to the Japanese tsunami.

Yet Bekink says his recent four-year assignment in Beijing taught him that the developed world cannot lecture poorer countries on their need to curb greenhouse gases at the expense of economic development.

“When countries get richer, they start spending more money on transportation,” he said. “Food gets richer too, and that has an impact on the environment. We can’t tell the Chinese to stay poor because we want to have it our way.”

The ambassador added that “it’s the world’s responsibility to make sure the inheritance of our children and grandchildren is not destroyed. Even though the U.S. might not have signed the Kyoto Agreement, by and large it has done quite a lot in terms of curbing greenhouse gases. It’s difficult, even for us” — a country that has publicly committed to relying more on renewable energy sources like the wind and sun.

When it comes to global warming, Bekink doesn’t think it’s too late to mitigate the effects of changing climate patterns, though he fears that time is rapidly running out.

“If you want to prevent similar disasters in the future, you better start soon. The political climate is now ripe for that sort of decision. When we talked to people in New York and New Jersey, we saw that obviously Sandy made quite an impression, and the American people are clever and dynamic. They’ll come to their own conclusions.”