Home The Washington Diplomat May 2013 Prepping College Grads for Life, and Work, Beyond the Classroom 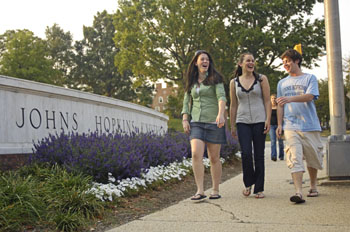 Times have been tough not just for those in the job market, but for those trying to break into it. Yet employment prospects may be looking up for new U.S. college graduates this year — at least for those who have what it takes to attract the eye of potential employers.

In fact, the overall job market has continued to strengthen for college and university graduates, according to Challenger, Gray & Christmas Inc. (CGC), a leading executive employment firm. “Job creation has been slow, but it has been steady,” said CGC Chief Executive Officer John Challenger.

Similarly, the National Association of Colleges and Employers (NACE) predicted 13 percent more graduates will get jobs this year compared to 2012. According to the group’s “Job Outlook 2013” survey, more employers are recruiting on campuses across the country, many in search of grads with degrees in business and finance, the computer sciences and engineering.

Officials at Johns Hopkins University in Baltimore, Md., confirm the uptick. “We had the largest employer turnout on record for our fall 2012 career fair,” said Eric Hall, associate director of the university’s career services.

On the other side of the country, tech-oriented San Jose State University in California, which describes itself as “powering Silicon Valley,” reported that more than 1,000 new businesses registered to recruit at the school over the winter months, according to CGC.

But there’s bad news as well: It’s an extremely competitive climate. “In this economy, it is likely that [new grads] will be vying for entry-level job opportunities with those who have been in the workforce for one to five years,” Challenger said. They may also be competing with workers nearing retirement, or already retired, who want to continue working and are willing to retool or take a pay cut, he added.

There’s another huge hurdle: Not every graduate has the skills and tools employers are looking for — and on that front, not every college or university is equal when it comes to producing employable graduates.

What do companies want from their new hires, and how happy are they with what they’re encountering on campus?

More than half of the 50,000 U.S. employers surveyed said they had difficulty finding qualified candidates for job openings. “Among industry segments, science/technology and media/communications appear to struggle more than other industries” to find good employees.

Some schools do better than others when it comes to shaping the kind of students who fit the jobs that human resource managers are looking to fill. 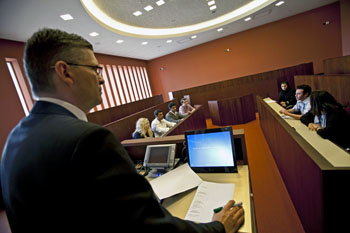 Georgetown University was the second-highest ranked university in the D.C. area on a recent global employability survey. According to the university, 73 percent of undergraduates who completed degrees in 2012 reported that they had found employment after graduation.

The result was an international “Top 150” list. Three universities in the Washington area are on it: Johns Hopkins University (59), the University of Maryland in College Park (142) and Georgetown University (68).

Also on the list were not-too-distant University of Virginia in Charlottesville, the University of Pennsylvania in Philadelphia, and Rutgers and Princeton in New Jersey.

General academic reputation and superstar status certainly played a role — the top five schools were Harvard, Yale, Cambridge, Oxford and Stanford. Then came the Massachusetts Institute of Technology, Columbia, Princeton and Imperial College London, sealing the “supremacy of British and American universities,” the surveyors said. Number 10 on the list was Goethe-University in Frankfurt, Germany.

However, less well-known institutions with strong business or technology schools or specialties in the all-important STEM studies (science, technology, engineering and math) also made the cut, such as Ghent University in Belgium and the University of Waterloo in Ontario. The survey was all over the map, in fact, with five schools in Switzerland, for instance, and seven in the state of California.

The list suggests that students should shop around to get the most bang for their buck by attending a school that’s not only prestigious, but practical as well — and offers them an avenue to an actual job when they graduate (and those hefty student loans come due).

Locally, Georgetown University was the second-highest ranking university in the D.C. area on the global employability list. Statistics for last year underscore that success: Of its undergraduates who completed degrees in 2012, 73 percent reported that they had found employment while only 4 percent were looking for work. The rest were headed to graduate or professional schools, service work or were “undecided.”

According to Mike Schaub, executive director of the university’s Cawley Career Education Center, a key component of that record is the liberal arts education the school offers its undergraduates — which is perhaps surprising in a work world with a voracious appetite for technical skill and business savvy.

Or perhaps not. “It enables students to develop critical thinking and problem-solving skills, communication skills and an understanding of world issues — skill sets applicable to work settings across career fields and across the globe,” Schaub pointed out. 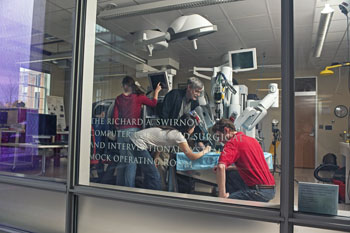 Another important reason Georgetown students are ready for work, Schaub told us in an email, is the internship: 85 percent of the students in the class of 2012 had at least one professional internship before they graduated.

A third advantage, Schaub cited, is the Georgetown Alumni Career Network, which provides access to more than 18,000 alumni who have offered to speak with students to learn about different career fields. Alumni also come to campus to help with interview preparations and resumes, and they take students on career tours in cities across the country, Schaub explained.

Similar themes were echoed by Johns Hopkins officials in Baltimore. Hopkins students, said career services associate director Eric Hall, are well rounded. They must have good GPAs to get in, but they tend to arrive with reams of extracurricular activities as well. They’re “tremendously gifted at managing their time,” he added. Thus, they may involve themselves in public service projects, take leadership roles, and explore the world of work very early on.

That can include research projects. “We have a reputation as a research institute,” Hall said. “Our faculty will give opportunities to students to get involved.”

As a result, a full 35 percent of the university’s 2012 graduates reported being enrolled at a graduate or professional school, while 46 percent reported full-time employment or paid public service; 8 percent were looking for work.

The hands-on approach to work is woven into the Hopkins undergraduate experience to the extent that 97 percent of students will have “one or more career-related experiences before graduation,” Hall said, including internships that can be used as a pipeline to work, fellowships and “job shadowing” where students spend time with someone engaged in careers that interest them.

Additionally, the school attracts students from all over the world, and the ability to operate comfortably in a global environment is invaluable. “I’ve increasingly seen companies come in with international opportunities. For example, they’ll have an opening in New York City and also one in Hong Kong or France,” Hall said.

An alumni support network, internships and mentoring are just some of the key attributes a school should offer to boost a graduate’s job chances. Other experts in the education field also say students need to do their homework and pick majors that have a future in the job market — the critical STEM majors are cited the most often.

But STEM hasn’t wiped out the importance of a solid liberal arts foundation, either.

“Training people for careers is only one of many roles for higher education. Just as people are not only employees, universities are not only places for job training. They have a responsibility for helping people become informed and thoughtful citizens,” said Loren B . Byrne, an assistant professor of biology and environmental science at Roger Williams University.

“In addition to employability, higher education institutions are well placed to help students increase their “thrivability” — that is how to become prosperous, healthy, happy, curious individuals who have skills for fostering interpersonal relationships; for participating in a dynamic and civil democracy; for seeking out unique and rewarding experiences like traveling that make life rewarding and seem worthwhile. Without all of those things, people’s individual well being declines. Having a job is rewarding and necessary but so are many other dimensions of life.”

Byrne added: “By virtue of their name, universities should continue to help people think ‘universally’ about all the dimensions of life and what it means to be a thinking human — even in, and especially during, times of economic uncertainty. More so than other times, the non-job aspects of life is what keeps us sane and hopeful.”