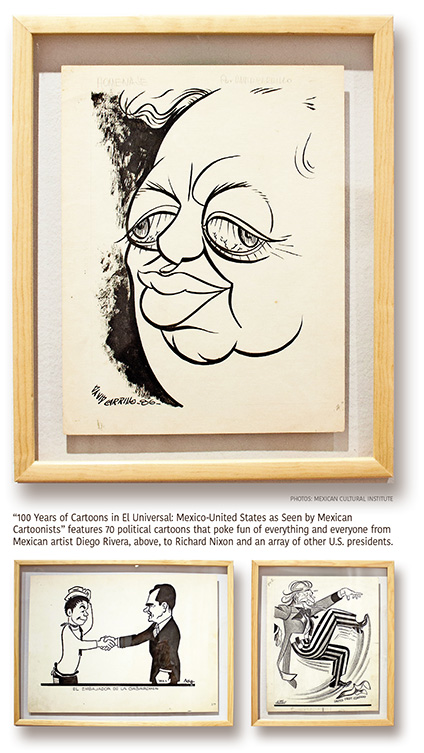 In today’s tense political climate, it’s hard to know whether to laugh or to cry at the dizzying bombardment of daily news headlines. Fortunately, comedians have always helped people make light of the crazy times in which we live, although lately these laughs have become serious business.

From “The Daily Show with Trevor Noah” in the United States to “El Pulso De La República,” Mexico’s first satirical political news show, there has been a growing trend toward combining political awareness with comedic satire — so much so that young people are abandoning traditional television and radio news outlets in favor of getting their news from “The Daily Show” and other comedic sources.

But political satire existed long before Comedy Central — long before the advent of TV in fact. Newspaper cartoonists have been instrumental in both poking fun at the absurdity of politics while also exposing its deeper flaws, using biting humor to raise the public’s consciousness about important issues of the day.

Exhibit curator Agustín Sánchez González said that being able “to bring to Washington this work that has critiqued, that has questioned, its own Mexican government and the government of the United States is highly important.”

The curator can be heard speaking in a video that plays throughout the exhibition rooms, his voice echoing the importance of the small, priceless slips of paper on display, most of which are originals from as early as the 1920s.

El Universal was Mexico’s first modern newspaper, with its first edition published on Oct. 1, 1916. Only a few weeks later, the first cartoon appeared, a sprawling drawing of the candidates vying for the constituent congress. Several of these candidates were creators of the newspaper itself, such as its founder, Félix Palavicini. The drawing, featured on the pamphlet for the exhibit and on the Mexican Cultural Institute’s website, reimagines the iconic scene of American soldiers raising the U.S. flag at Iwo Jima. Here, the candidates raise a giant pen that serves as the flagpole, with a dove depicted on the flag.

The exhibit contains five sections, beginning with a look at the formation of the newspaper and the origins of its cartoons.

The comic strip itself was exported from the United States, and in the section titled “Tribute of the Mexican Cartoon to the Comic Strip,” Juan Terrazas, the director of Museo de la Caricatura, reproduces an article and its cartoon drawings from the famous cartoonist Guillermo Castillo. The article, “The Men of Laughter,” features caricatures of well-known American personalities at the time such as Charlie Chaplin.

Among the recurring themes are searing critiques of American neocolonialism and the borders that governments erect — themes that resonates just as strongly today as they did decades ago.

In one drawing, Uncle Sam is seen slipping on a banana peel that represents the United Fruit Company, a reflection of the animosity many Mexicans felt toward the conglomerate that came to dominate Latin America, becoming deeply intertwined in its politics, cornering the banana market and, critics say, exploiting the region (leading to the term “banana republic”).

Yet the critiques don’t just apply to the U.S. In a bold 1960 piece, Eduardo Del Río, whose penname is Rius, depicts a man sitting leisurely on a beach reading a newspaper titled “Mexico para los Mexicanos (Mexico for the Mexicans).” A nearly drowned man emerges from the water while a ship with “Cuba” written along its side sinks in the distance, but a sign blocks his passage, telling the man to keep out. The cartoon by Rius — a strong supporter of the Cuban Revolution — shows that Mexico, like so many other countries, is not immune to anti-immigrant sentiment.

Another section, “The Gaze at the Neighboring President,” looks at American presidents. A caricature of Barack Obama exaggerates his distinctive facial features, although — not surprisingly given their controversial Mexico policies — the caricatures of Ronald Reagan and Donald Trump are infused with political commentary.

A piece by the artist Efrén simply titled “Reagan” shows the former president smiling while inside his mouth sits a peace dove trapped behind bars. A more contemporary, self-explanatory piece by Arturo Kemchs features barbed wire in the shape of Trump’s name. In another not-so-subtle piece, the controversial, Twitter-happy U.S. president resembles a pig, with a nuke button as his nose while he clings to a smartphone in his hand.

The final section, “The Masters of Cartoon,” showcases pieces by modern artists such as Ramón Garduño and David Carrillo. Garduño’s colorful rendition of “Las dos Fridas: The Two Fridas” is placed amusingly and perhaps purposely next to Carrillo’s unflattering black-and-white caricature of Diego Rivera, clearly showing a contrast between legendary Mexican painter Frida Kahlo and her older muralist husband, with whom she had a tempestuous relationship.

We live in a highly visual world, a phenomenon that predates today’s age of Instagram selfies. Even in the heyday of newsprint, images were a powerful vehicle to elicit visceral responses ranging from laughter to tears.

As this exhibit shows, cartoons are more than just amusing illustrations. They are an important part of the political fabric that allows society to criticize — not censor — itself.

“Criticism and humor are vital to societies,” González said. “A society without humor, a society without criticism, will inevitably fall to authoritarianism. I believe democracies need criticism, need liberty, need a diversity of opinions. In that sense, the cartoon has it all.”

100 Years of Cartoons in El Universal: Mexico-United States as Seen by Mexican Cartoonists”

Hannah Vandegrift is an editorial intern for The Washington Diplomat.