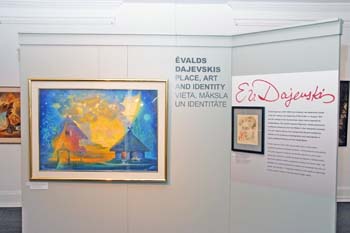 On one level, the art of Evalds Dajevskis is specific to his native Latvia, a country with a proud past, though it’s not well known to most Americans. But on another level, his work speaks to the larger displacement endured by millions of immigrants in World War II Europe, and to the role these immigrants played in constituting America’s melting pot.

This complex journey is embodied by Dajevskis, a theater scene artist uprooted by war who eventually settled in the United States, enjoying a career in film and Broadway while also creating art that captures the rich ancient history of the homeland he left behind.

The Embassy of Latvia in Washington chronicles this journey with the appropriately named exhibit “Place, Art and Identity.” Dajevskis went through various reincarnations of his own identity in different places over the years, as seen in his art.

A professional scenographer for the Liepaja Opera, Drama and Ballet Theater from 1941 to 1944, he formed a traveling theater troupe that performed throughout Western Germany at displaced persons camps after World War II. Dajevskis then made his way to the United States, where he worked as a scenic artist on Broadway and for Lincoln Center productions. 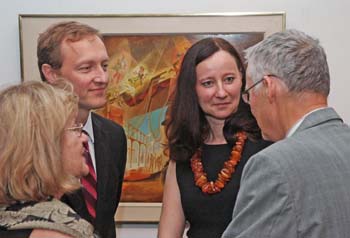 Recently appointed Ambassador of Latvia Andris Razans and his wife Gunta Razane, left, talk with guests at the opening of “Place, Art and Identity,” an exhibition of works by Evalds Dajevskis, a professional stage set designer who settled in the United States after World War II.

Throughout it all, he painted. His artwork is rooted in the traditions of the ancient Baltic peoples, but it’s also a travelogue of his life — from his childhood days living outside St. Petersburg, Russia, to his home in Latvia, to the refugee camps in Germany where thousands of Latvians were stranded for years, all the way to the lights of Broadway.

Dajevskis died in 1990 after a long bout with cancer, leaving his son Peter with a stunning collection of art reflecting the culture of a country with a complicated past.

“I inherited over 200 paintings of work,” Peter Dajevskis said. “My father said, ‘See if you can keep these together.'”

He’s done more than that — he’s taking the art on its own journey, back to the very place his father was forced to leave. After its D.C. run, the exhibit of 34 pieces from Peter Dajevskis’s personal collection, which spans work painted between 1938 and 1989, will move to Philadelphia in January 2013 and later on to New York.

Finally, in May 2014, a major retrospective including 75 works and a personal archive of the artist’s photographs, personal documents and other items will be presented at the Liepaja City Museum as part of a 100th-birthday commemoration.

His father’s art shows “what it looked like when the lights were turned to amber and damaged by war,” Dajevskis said. “It interested the general public, this person who witnessed these things — it was a generation of rebirth.”

Andris Razans, who this summer became Latvia’s ambassador in Washington, said the exhibition offers something different for every visitor. “First, it is a very personal, a very human story of Evalds Dajevskis,” he told The Diplomat. “Then war-destroyed Germany, the hope of people in Hamburg seeing restored electrical lights turned on. And [then] New York City as a sharp contrast to everything one had seen in Europe.”

Razans added that the exhibit very much tells the story of the Latvian people, a story to which many Europeans and even Americans can relate.

Peter Dajevskis praised the embassy for hosting such cultural exchanges, saying that Latvia “has a challenge to make itself known.”

“I hope that the future will, through the efforts of this sort, make Americans more aware of a shared history.”

He noted that art played an important role in immigrants enriching America’s own multicultural heritage. “It wasn’t just painting, it was performing arts too,” he said. “I think that art helps sustain the human spirit.”

The ambassador agrees that culture “surely stands among the most direct and effective means of communication among nations.”

“We should share it, because by doing that we nourish a genuine interest in others to come and meet us, to learn and study, and of course enjoy our cultural legacy.”