Home The Washington Diplomat November 2012 What If Your Adversary’s ‘Other Son’ Was Really Your Own? 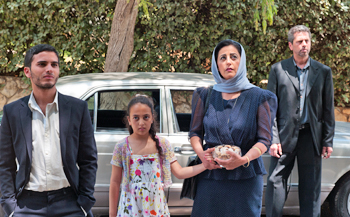 Also See:
‘Simon and the Oaks’ and ‘The Flat’ and Repertory Notes

The Al Bezaaz family of the West Bank visits the Silbergs in Tel Aviv after learning that their two sons — one Palestinian, the other Israeli — had been switched at birth in Lorraine Lévy’s family drama “The Other Son.”

French writer-director Lorraine Lévy brings a fresh perspective to the age-old Israeli-Palestinian conflict in her poignant family drama “The Other Son,” filmed on location in Israel and the West Bank.

Her well-structured screenplay, co-written with Nathalie Saugeon and Noam Fitoussi, creates fleshed-out scenarios that never seem unrealistic. That authenticity is an especially important asset for an already incredible story about babies switched at birth. The verisimilitude is enhanced by vivid cinematography, steady direction and believable performances from a talented international ensemble cast.

In contemporary Tel Aviv, 18-year-old Joseph Silberg (Jules Sitruk) lives an apparently well-adjusted existence. The happy family speaks French at home as the parents of his doctor mother Orith (French leading lady Emmanuelle Devos) and his Israeli-born colonel father Alon (rising French actor Pascal Elbé) were born in France. An aspiring musician, Joseph’s biggest problem seems to be figuring out how to earn spending money in the summer before entering the Israeli Air Force for his mandatory military service.

Orith notices a discrepancy on his pre-enlistment blood test, which assigns him a blood type genetically impossible given his parents’ blood types, so she thinks the lab made a mistake. A repeat blood test leads a medical colleague to hypothesize and confirm that newborn Joseph was accidentally swapped with another infant after being evacuated when the hospital was attacked by Scud missiles. The other boy turns out to be Yacine Al Bezaaz (Mehdi Dehbi), who was raised in the West Bank by an adoring Palestinian mother Leïla (Areen Omari) and father Saïd (Khalifa Natour). At the doctor’s office, the two sets of parents have an awkward meeting, after which the fathers continue to act in denial, so they hesitate to tell their sons.

Eventually, Joseph and Yacine both learn the truth. They and their family members are challenged by conflicting thoughts about identity, religion, nationality, etc. Yacine’s previously doting older brother Bilal (Mahmood Shalabi) turns against him, viewing him as part of the Jewish enemy that killed their younger brother in a military attack.

But the families gradually come together. Yacine, Leïla and Saïd cross the border checkpoint to visit the Silberg home in Tel Aviv, where a connection is made in part because of Yacine’s fluency in French as a student in Paris who aspires to medical school. When Joseph later ventures intrepidly to the Al Bezaaz residence in the West Bank, he sings with music-loving Saïd and Bilal around the dinner table, a blood tie that transcends initial wariness.

‘Simon and the Oaks’

Young Simon (Jonatan S. Wächter), seen with his mother Karin (Helen Sjöholm), is an introverted child who doesn’t fit in with his working-class Swedish family in “Simon and the Oaks.”

Swedish helmer Lisa Ohlin’s “Simon and the Oaks” proves to be an accomplished translation of Marianne Fredriksson’s bestselling novel, from which Marnie Blok faithfully adapted the screenplay, likely satisfying fans of the original book.

Bringing the stirring coming-of-age story to life, the solid thespian turns by the principals demonstrate an impressive amount of emotion beyond what one might expect to be stereotypical Scandinavian fare, particularly for a period piece. In Sweden, the film raked in big at the box office while achieving critical acclaim, earning a record 13 nominations for Guldbagge Awards (Swedish Academy Awards), including Best Picture, Director and Cinematography.

In 1939, young Simon (Jonatan S. Wächter) lives outside Gothenburg in a country house without running water and indoor toilet. He’s loved by his working-class mother Karin (Helen Sjöholm) and carpenter father Erik (Stefan Gödicke), but the latter worries that Simon never plays and fights like other boys. Rather, Simon keeps to himself, immersed in books, and talks only to a tree. When Simon applies on his own to a school in the city, his father hesitates to let him go. Erik relents under pressure from Karin, allowing Simon to attend under two conditions: He can’t let his new, refined peers make him forget where he came from. And he has to make real friends, letting go of his imaginary friendship with the tree.

The first day, Simon befriends Isak (Karl Martin Eriksson), a German Jewish boy who’s teased by older students because of his religion. When a bigger boy blocks their path, Simon deftly punches the bully. After class, Simon is thrilled to discover Isak’s affluent father Ruben (Jan Josef Liefers) owns an entire bookshop, above which they live with Isak’s mother Olga (Lena Nylén) in a lavish flat. Simon excitedly relays his amazement when he tells his parents about his day, though Erik is far less impressed.

Olga never leaves home because she suffers paranoia about the Nazis, a legacy of the family’s flight from Germany. The impending Nazi advance across Europe leads her to a mental asylum. Isak then goes to live with Simon’s parents because his father Ruben is gone all day at work. There, Erik insists that Isak learn to use his hands and help with the woodworking, toward which Isak is naturally inclined anyway. On the flip side, Simon is drawn to literature, art and music in Ruben’s life, but his parents — especially Erik — resist his attraction to what they consider to be stuck-up affectations.

Spurred by the specter of World War II, the two families merge into an extended family that manages to work despite occasional class and sexual tensions. After the war, Isak (played as an adult by Karl Linnertorp) is happy to join the shipyard run by Erik, but adult Simon (played by Bill Skarsgård) rebuffs Erik’s crass eagerness to see Simon get his hands dirty. One day, Simon learns a family secret that explains why he never fit into his parents’ world — and why his parents always feared him straying too far from the nest.

Mysteries of ‘The Flat’ 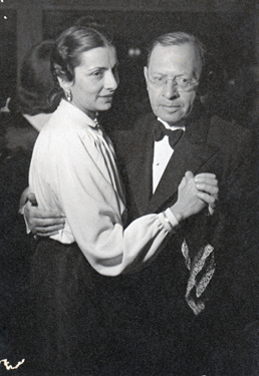 Gerda and Kurt Tuchler dance in an old photograph, part of their grandson Arnon Goldfinger’s documentary “The Flat.”

At the 2012 Tribeca Film Festival, “The Flat” won for Best Editing, a well-deserved tribute to Israeli editor Tali Helter-Shenkar’s skillful organization of the treasure trove of revealing details that fill this fascinating documentary.

Unearthed ancient family secrets lie at the heart of “The Flat,” Israeli writer-director Arnon Goldfinger’s (“The Komediant”) unorthodox family portrait documenting the unbelievable truth he discovers after his grandmother Gerda Tuchler passes away at 98. With his mother Hannah, he takes on the duty of emptying the apartment in Tel Aviv where Gerda lived for some 70 years after immigrating with her husband Kurt in 1937 to Palestine from Berlin. Vast collections of knickknacks, clothes and books are assessed as being largely worthless materially.

But buried in the endless mounds of papers, pictures and other items are pieces of a puzzle yearning to be solved. One coin shows a Star of David on one side, but turning it over unexpectedly reveals a swastika on the flipside. Another surprising find is “A Nazi Travels to Palestine,” stories printed in a 1930s fascist publication.

“What is Nazi propaganda doing in my grandmother’s flat?” asks Goldfinger. Armed with his video camera, he seeks to find out the answers, carrying out his investigation in both Israel and Germany.

He links his grandparents to SS Officer Leopold von Mildenstein and his wife, a couple with whom the Tuchlers first visited Palestine in the 1930s. Even more startling, their close relationship with the Mildensteins apparently resumed after being interrupted during World War II, enduring at least into the 1950s. It seems that each couple treasured their friendship with the other couple. Why would Goldfinger’s Zionist grandparents keep in contact with a high-ranking Nazi after the war?

It’s a question that is at the heart of Goldfinger’s documentary, but even after his exhaustive examination into the past, he still doesn’t found the big answers he desires.

The “Festival of New Spanish Cinema” (Nov. 1-7) is organized by Pragda and AFI Silver with support from the Embassy of Spain in Washington and Spain’s Ministry of Education, Culture and Sport. The opening night feature “Sleep Tight” (Thu., Nov. 1, 7 p.m.), with director Jaume Balagueró in person, is followed by a reception.

In partnership with the Embassy of Switzerland, the series “From Tinguely to Pipilotti Rist – Swiss Artists on Film” (Nov. 23-Dec. 29) showcases contemporary documentaries by Swiss filmmakers.

“Werner Schroeter” (Nov. 12-Dec. 17), the first North American retrospective of the eponymous German film, theater, and opera director (1945-2010), moves to the Goethe-Institut in Washington and the National Gallery of Art after debuting in New York. Legendary German auteur Rainer Werner Fassbinder lauded Schroeter as “the most important, exciting, decisive, as well as decided director of alternative films … Schroeter has been endowed with a clearer, more comprehensive view of this ball we call the earth than anyone else doing art, of whatever kind. And strange, wondrous secrets of the universe it seems to me to reveal themselves a bit to this lucky, privileged man.”

Flowers of the Steppe: A Festival of Kazakh Cinema


“Flowers of the Steppe: A Festival of Kazakh Cinema” (Nov. 14-20 in Washington, D.C., and Boston) is presented by the Goethe-Institut; the Freer Gallery of Art; the Museum of Fine Arts in Boston; the Ballets Russes Cultural Partnership; the Embassy of Kazakhstan; and KazakhFilm Studios. On Sat., Nov. 17, 7 p.m., at the Goethe-Institut, Steven-Charles Jaffe, honorary consul of Kazakhstan in Los Angeles, introduces the screening of Ermek Tursunov’s 2009 “Kelin,” preceding a talk with Jaffe and Kazakh film director Ermek Shinarbaev. On Sun., Nov. 18, 2 p.m., at the Freer, Shinarbaev’s “Letters to An Angel (Pisma k Angelu)” is accompanied in person by its director and sound engineer Gulsara Mukataeva, followed by a discussion and reception featuring traditional Kazakh food. On Tue., Nov. 20, 4 p.m., the Kennan Institute at the Woodrow Wilson International Center for Scholars screens the festival’s closing film, “Akkyz (The White Girl),” before a panel discussion with Shinarbaev; Dastan Yeleukenov, deputy chief of mission of the Embassy of Kazakhstan; and Anna Winestein, executive director of the Ballets Russes Cultural Partnership.

On Fri., Nov. 9, 5:30 p.m., the multimedia program “November 9: Today / 1989 / 1938 – Commemorating Lessons of History” kicks off with the discussion panel “‘The Devil in History’: Communism, Fascism and Some Lessons of the Twentieth Century,” in which author Vladimir Tismaneanu discusses his book with Richard Wetzell, research fellow at the German Historical Institute. At 7:30 p.m., a screening follows of Alain Resnais’s 2005 classic “Night and Fog (Nuit et Brouillard),” shot at concentration camps in Poland. At 8 p.m., Anna Winestein, executive director of the Ballets Russes Cultural Partnership — supported by the Embassy of Kazakhstan — presents Rustem Abdrashev’s 2008 “The Gift to Stalin (Podarok Stalinu)” a sneak peak at “Flowers of the Steppe: A Festival of Kazakh Cinema” (Nov. 14-20).

Timed with the release of Taiwanese-born director Ang Lee’s latest work, “Life of Pi,” the Freer and the AFI Silver offer a complete retrospective of his work, cosponsored by the Taipei Economic and Cultural Representative Office, opening with “Lust, Caution” (Fri., Nov. 16, 7 p.m.), which took home the Golden Lion at the 2007 Venice Film Festival.