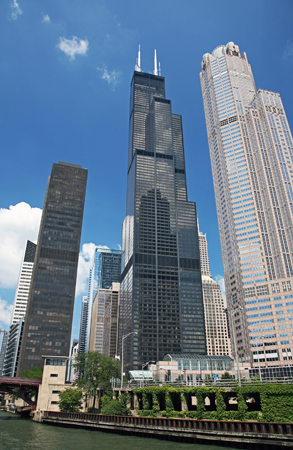 Chicago is famous for its glittering skyscrapers, deep-dish pizza, wintery weather and corrupt politicians. Al Capone, Michael Jordan, Muddy Waters, Nat King Cole, Barack Obama, Hillary Rodham Clinton and Ernest Hemingway all lived in Chicago at one time or another. The Windy City — also called the Second City, for being the second-largest U.S. city until L.A. overtook it — has always been considered a quintessentially American city rather than an international one, and no one thinks of diplomacy when they think of Chicago.

But Chicago is an important regional hub for diplomats, and it’s far more international than many on the East or West Coast realize. There are 49 consulates staffed by some 500 accredited diplomats in the city, with another 37 consulates run by honorary consuls. The city is home to a number of international affairs organizations, including the Chicago Council on Global Affairs and Global Chicago. And according to census data, 36 percent of Chicagoans speak a language other than English at home.

Diplomats here say that while many of their colleagues clamor for a posting in Washington or New York, Chicago is something of an underrated post.

Brazil’s consul general in Chicago, Paulo Camargo, has been a diplomat for 35 years and has served in both New York and Washington but said that Chicago has been one of his best posts.

“It’s very comfortable here,” said the São Paulo native. “It’s very hospitable. There are plenty of cultural opportunities — you have music, theater, opera. It’s easy to work here. There’s no friction at all.”

The 110-story Willis Tower, formerly known as the Sears Tower, looms over the Chicago River. Chicago is home to nearly 50 consulates staffed by some 500 accredited diplomats in the city, with another 37 consulates run by honorary consuls.

The city’s consular corps may be small compared to Washington or New York, but diplomats say there’s an active social scene and given the smaller scale, people can get to know each other better because they see the same faces at every event. The two largest foreign missions in the city are the Mexican and Polish consulates, which is reflective of the city’s demographics. There are more than 1 million Mexican immigrants living in the metro Chicago area and some 50,000 Polish immigrants and 200,000 Polish-Americans call Chicago home.

Some of the other countries that have a significant diplomatic presence in the city include China, India, Britain, Canada, France, Germany, Ukraine and nearly all of the Balkan countries, thanks to the city’s large Diaspora from Southeast Europe. Chicago also has a substantial Russian population but there is no Russian consulate. A host of countries that you might not expect to have any representation, like the island of São Tomé and Príncipe (off the African coast), Monaco, Mauritius, Luxembourg and Iceland, have honorary consuls in Chicago or nearby.

Most of the diplomatic missions focus on consular affairs, public diplomacy, and trade and tourism promotion. The State Department’s Office of Foreign Missions maintains an office in Chicago to provide support to local diplomats on issues such as getting their diplomatic license plates, driver’s licenses and tax-free cards.

The city has a host of well-regarded colleges and universities — including Northwestern, Columbia College, Loyola University, the University of Illinois-Chicago (UIC) and the Illinois Institute of Technology — and often attracts diplomats with college-age children. Camargo’s daughter studies journalism at Columbia College, for example, and the son of Helmut Rausch, Germany’s deputy consul general in Chicago, attends UIC.

Many of the city’s consulates are on or near a stretch of Michigan Avenue filled with ritzy shops, referred to as the Magnificent Mile. Rausch, whose government provides a housing allowance, lives on the 64th floor of the city’s iconic John Hancock Tower on Michigan Avenue with a panoramic view of Lake Michigan. Camargo also lives just a short walk away from work, but some diplomats choose to live in western suburbs like Oak Park or River Forest or north shore suburbs like Evanston or Wilmette because their governments don’t pay for private schools and those suburbs are perceived to have better public schools. Camargo has a child at the Ogden Elementary School, a public school close to the consulate, and said he’s been happy with it.

One of the logistical challenges nearly all of the Chicago missions face is geography. Most consulates are responsible for 10 to 15 U.S. states, most of them large ones, so it’s difficult for diplomats to logistically cover such a huge swath of the country. Brazil, which has 10 consulates in the United States, schedules “mobile consulate” days in cities like Omaha, Indianapolis and Iowa City to provide consular services to Brazilian citizens.

Chicago is a cosmopolitan city where people are used to foreigners who might have accents, but some diplomats say that once you get out into rural areas in the Midwest, locals aren’t as used to dealing with people from other countries.

Patricia Maza-Pittsford, the consul general of El Salvador in Chicago, said that she’s had a few run-ins and misunderstandings in rural areas where police officers aren’t using to encountering diplomats. Maza-Pittsford was a coffee trader in New York who became a diplomat after the civil war in El Salvador ended in 1992. She was posted to Chicago in 2001 and has been the dean of the city’s consular corps since 2007.

“You go into a restaurant in South Dakota and having people stare at you, you feel the impact,” she said. “I had a traffic incident in Kentucky once, someone ran a red light and I was upset because I almost hit him. I swore and told him something not pleasant and he said, ‘At least I’m white.'”

Those incidents notwithstanding, she still likes Chicago and isn’t in a hurry to leave anytime soon.

Maza-Pittsford and other diplomats say that the hardest part of living in Chicago is the weather, not just in Chicago but also in the neighboring states.

Upscale buildings line the Chicago River, with the Trump International Hotel and Tower at the center.

“The weather plays a role in it not being such an attractive post,” she said. “If I had been in L.A. or Miami or Spain or London, I wouldn’t be able to stay this long. This is not a very attractive destination because you have to travel to Iowa, Nebraska, Minnesota and all the other cold places.”

But what keeps Maza-Pittsford in Chicago is the good life her family enjoys and the opportunity to mingle and really get to know other members of the consular corps in the city.

“It’s an active community,” she said. “Argentina has a tango demonstration every year, at the Indian National Day they always have beautiful dancers and good food, Thailand has dancing and colorful demonstrations with Thai food, and the Germans have an Oktoberfest party. There is always something going on.”

Rausch of the German Consulate has been a diplomat for 40 years and will retire when he leaves Chicago in June. He has served in Bangladesh, Bolivia, Greece, Madagascar, Thailand, Chile, Hong Kong, France and as ambassador to Chad, but he had never served in North America until he arrived in Chicago nearly three years ago. Born in West Berlin in 1948, his first encounter with Americans was when John F. Kennedy delivered his famous “Ich bin ein Berliner” speech in 1963. He always wanted to have a chance to better understand the United States and thinks that there is no more representative city in the country than Chicago.

“It is the most American city,” he said. “It’s the heart of the country in many ways. I’ve gotten insights into the culture here I didn’t have before and when I leave this country, I will feel like I understand it. And I’ll be able to better explain America to my compatriots and friends back home.”

Dave Seminara is a contributing writer for The Washington Diplomat.