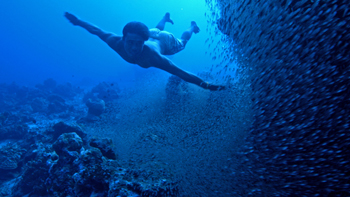 On March 18, the Embassy of Singapore screens “No Word for Worry,” about a sea nomad trying to preserve the remains of his culture off the coast of Myanmar.

Returning March 17 to 29, the 23rd annual Environmental Film Festival in the Nation’s Capital boasts over 160 films from 31 countries, with a special focus on climate change this year. The sweeping showcase will touch on an impressive array of issues affecting the planet, from the importance of annual rains in India; to the consequences of hydraulic fracking; to the appalling waste in our food system.

The festival has long enjoyed participation from myriad partners across the metropolitan area, including helping hands from a good number of diplomats at embassies in D.C. On Feb. 11, the Embassy of Singapore hosted a benefit reception for the festival, the longest-running and largest environmental film festival in the United States, as well as the largest film festival in the D.C. area. Ambassador Ashok Mirpuri and his wife honored Sen. Sheldon Whitehouse (D-R.I.) and Dr. Sandra T. Whitehouse as “Champions of the Earth’s Oceans and Climate.”

On Tue., March 17, the opening-night film “Charlie’s Country” makes its D.C. premiere at the Embassy of Australia, introduced by Teresa Keleher, director of embassy cultural relations. The film follows a warrior living in a remote Aboriginal community in northern Australia who is caught between two cultures and ways of life.

On Wed., March 18, the U.S. premiere of “Bye Bye Car,” a film about the future of mobility, takes place at the Royal Netherlands Embassy and will be introduced by Janneke de Vries, counselor for infrastructure and the environment.

Various other embassy features happen March 18 as well: In “My Stuff,” a young man who runs up his credit card debt starts an existentialist experiment when he puts all of his belongings in a storage container and only allows himself to retrieve one item per day. The film screens at the Embassy of Finland, where it will be introduced by cultural counselor Keijo Karjalainen and followed by a talk with filmmaker Petri Luukkainen and a reception.

“Sharks of Mexico” unspools at the Mexican Cultural Institute, introduced by minister Laura Ramírez-Rasgado followed by a discussion with filmmaker Gerardo del Villar, an underwater photographer who led an extraordinary and dangerous expedition to study and document Mexico’s more than 100 shark species.

Meanwhile, at Singapore’s Embassy, Gouri Mirpuri, wife of the ambassador, introduces the D.C. premiere of “No Word for Worry,” preceded by the short “City Made from the Sky.”

On Thu., March 19, “Journey to the Safest Place on Earth” at the Swiss Embassy examines the challenges of finding a final repository for the most dangerous waste man has ever produced: highly radioactive nuclear waste. Later that night, “H2OMX” about Mexico City’s water crisis plays at the Inter-American Development Bank.

On Fri., March 20, at the Carnegie Institution for Science, Luc Jacquet’s work-in-progress “Ice & Sky,” part of the Luc Jacquet Retrospective, is co-presented by the Embassy of France. The Oscar-winning director presents clips from his new film about glaciologist Claude Lorius’s groundbreaking study of Antarctic glaciers that first alerted the world to the effects of climate change.

On Sat., March 21, at the Avalon Theatre, the Embassy of France co-presents another film in the Luc Jacquet Retrospective, “March of the Penguins,” boasting introduction and post-film talk by filmmaker Jacquet.

On Sun., March 22, at the West End Cinema, the Embassy of France co-presents the continuation of the Luc Jacquet Retrospective, “The Fox and the Child,” about how a young girl’s adventures with a fox teach her to appreciate the beauty of the natural world. The Italian Cultural Institute teams up with AFI Silver Theatre for “Sacro Gra,” which documents a tumultuous ring road that encircles Rome. 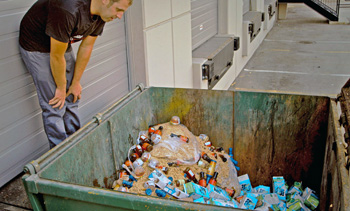 Director and film subject Grant Baldwin checks out a dumpster of excess, but edible, food in “Just Eat It: A Food Waste Story,” part of the Environmental Film Festival.

On Tue., March 24, the Goethe-Institut hosts the U.S. premiere of “Gambling on Extinction,” which investigates the players in the poaching business, from organized cartels, to terrorist groups funding political conflicts, to investors and consumers. Also that day, “See No Evil,” a poetic, painful documentary about the relationship between humans and apes, makes its U.S. premiere at the Embassy of France.

On Fri., March 27, the Japan Information and Culture Center screens “Sunshine Ahead” about a man who attempts to revive the coral reefs in his hometown of Okinawa.

On Sat., March 28, the Royal Netherlands Embassy co-presents the U.S. premiere of “The New Wilderness” at AFI Silver, which also screens the D.C. premiere of “My Name Is Salt” in conjunction with the Embassy of Switzerland.

For more information and a complete schedule, please visit www.dcenvironmentalfilmfest.org.