Op-ed: Give Biden a break 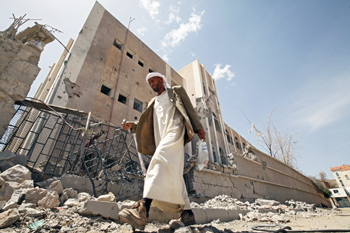 On Aug. 19 in Cairo, the head of the U.N. World Food Program warned that “all the signs” of famine are present in Yemen and an entire generation of children in the Arab world’s poorest nation is at risk of irreversible harm unless aid agencies reach them.

On April 28, a guard walks past what remains of Ibn Sina School in Sanaa, Yemen’s capital. The school was heavily damaged during an airstrike that hit the building next to the school. The impact of the blast crumbled the outer wall of the schoolyard and left classrooms covered in rubble and broken glass.

“The civilian population is bearing the brunt of the conflict — a shocking four out of five Yemenis require humanitarian assistance and nearly 1.5 million people are internally displaced. More than 1,000 children have been killed or injured and the number of young people recruited or used as fighters is increasing,” O’Brien told the U.N. Security Council.

The British diplomat condemned the “disregard for human life by all parties.” He said residential areas and civilian infrastructure have been targeted in attacks. The port of Hodeidah — the main terminus in the north of the country for imports of essential food, medicine and fuel — was put out of service by a Saudi airstrike.

The United Nations has classified Yemen as a “level 3” emergency, the highest possible classification. International Medical Corps says 80 percent of the population of 26 million is in need of humanitarian assistance and 850,000 children are malnourished.

Aid agencies have called for unhindered access for humanitarian workers to reach millions of Yemenis and said more funds are urgently needed to help stave off an even greater disaster in the country.

But their pleas have been met with a resounding thud of nothing. Because sadly, it seems that Yemen makes only a tiny blip on the humanitarian radar screen of the international donor community.

Last year, the U.N.’s Yemen Humanitarian Response Plan was 58 percent funded, which is hugely better than this year, when the needs of Yemenis have soared but just 22 percent of the $1.6 billion the U.N. says it needs in Yemen has been received. Yemen is one of the most underfunded humanitarian crises in the world. Faring worse than Yemen are: Senegal (16 percent funded); the Sahel region (15 percent); Djibouti (10 percent) and Gambia (5 percent). But none of those countries is grabbing headlines and picture captions every day like Yemen is.

The story in Yemen is complicated. In September of last year, Houthi rebels allied with former longtime President Ali Abdullah Saleh, who resigned during the Arab Spring uprisings in 2011, began advancing on the capital, Sanaa.

In January of this year, the Houthis rejected a draft constitution put forward by President Abd Rabbu Mansour Hadi, who came to power in early 2012 as part of a deal brokered by the Gulf Cooperation Council after Saleh left office. Hadi, who was placed under house arrest, eventually fled to Saudi Arabia, which launched an aerial bombing campaign in March to root out the Iranian-aligned Houthis and reinstall Hadi’s internationally recognized government.

The Saudis also imposed a naval blockade on Yemen’s seaports — a lifeline for the country, which depends on imports of food to survive. Although the Saudi-led military intervention has been criticized for indiscriminately targeting civilians, Riyadh has received intelligence and logistical support from Washington. The Sunni powerhouse contends that it is trying to prevent Iran, its Shiite rival, from exerting dominance over Yemen. 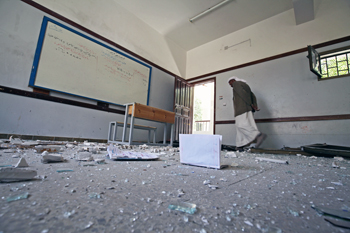 A classroom at the Ibn Sina School is Sanaa is covered in glass and other debris following an airstrike. The school, where 1,500 girls studied in primary and secondary classes, is closed indefinitely.

Yet Saudi Arabia has a long history of meddling in its southern neighbor, which controls the Bab el-Mandeb Strait, a key chokepoint for the global transit of oil. And while Iran has provided tacit backing to the Houthis, many experts doubt that the Houthis are taking direct orders from the mullahs in Tehran.

The northern-based Houthis, who follow the Zaydi branch of Shiite Islam and make up about a third of the Sunni-majority nation, have long complained of marginalization by Yemen’s central government. Saleh himself waged several wars to tamp down a Houthi insurgency during his 33-year rule. The Houthis’ current marriage of convenience with the former strongman illustrates the fickle nature of allegiances in Yemen, a destitute country whose northern and southern factions remained divided until 1990.

In fact, although it has become a proxy war for the Saudi-Iranian regional power struggle, Yemen is also home to a tangled patchwork of local tribes, militia movements, secessionists and Islamists whose shifting loyalties have fueled the fighting.

The Houthi takeover and subsequent Saudi intervention, however, have exacerbated underlying sectarian tensions and pushed the country into all-out civil war. After wresting the southern port city of Aden from Houthi control, Saudi Arabia, joined by troops from the United Arab Emirates and possibly Qatar, is reportedly planning a major ground offensive to take back Sanaa, which threatens to escalate the bloodshed.

In the meantime, al-Qaeda in the Arabian Peninsula (AQAP) and Islamic State militants have taken advantage of the chaos to stage deadly attacks. Casualties continue to mount as the world essentially turns a blind eye to Yemen’s dissolution.

The World Health Organization has warned that public health services are on the brink of collapse, while the United Nations says more than 4,500 Yemenis have been killed since the latest fighting began in March. An entire generation appears to be on the verge of being lost to hunger and violence as factions jockey for influence and territory.

In Houthi-controlled Sanaa, political analyst Hisham Al-Omeisy said that even if all of the world’s donor nations were to suddenly step up and write checks for the relief efforts in Yemen, it wouldn’t help at this point.

Omeisy accused the Saudi-led coalition not only of blockading seaports but also of targeting Yemenis’ more immediate sources of food by bombing markets and food trucks. 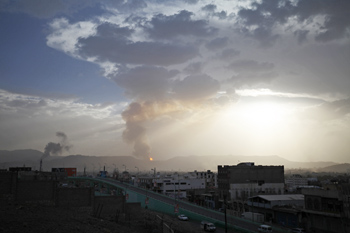 On April 6, 2015, fire and a large plume of smoke — resulting from an airstrike that hit a military site on Faj Attan Mountain, high above Sanaa, Yemen’s capital — rises toward the sky and begins to blanket the city below.

Canadian-educated Omeisy said he spends his days “scavenging for food, fuel, the basics.”

“We have no electricity now. It’s been awhile. We get one hour of electricity every four or five days. You rely on your personal generators, but because of the Saudi blockade, there’s a severe shortage of fuel which further complicates our problems,” he said.

“Even though the United States and the U.K. are pushing for a humanitarian pause, for some sort of a political solution, the Saudis are still pushing for a military win,” he said, claiming that such a strategy would require “killing thousands upon thousands of people.”

Meanwhile, Yemeni engineering student Nisma Alozebi said she and her family have been displaced four times by the fighting in Aden. She said most families in the southern port city have lost at least one family member to the fighting.

“We have spent the last five months praying we don’t die. It’s been five months of hell,” Alozebi told The Diplomat by phone from Aden. “We’ve lived in fear of dying, every day,” the 20-year-old, whose studies have been interrupted by the fighting, said.

Unlike Omeisy, however, Alozebi lays much of the blame for the current misery at the hands of the Houthis.

“The Houthi militia have done every bad thing — they’ve killed civilians and destroyed everything in their wake. For five months we’ve not been able to get food. Electricity was cut off for days because they cut the power lines. We had no internet. We were like an island where no one knows what’s going on,” she said.

Neither Alozebi nor Omeisy could explain why the international community has allowed Yemen to become “an island” of indifference.

But Susan Moeller, a University of Maryland professor of media and international affairs, said part of the fault lies with media outlets in the United States and Europe.

“They have never covered Yemen as they have other countries in the region. Yemen has only rarely been on the international news radar, and even on those occasions for a brief period of time and typically lumped in with an evaluation of other crises in the Middle East,” Moeller told us by email from France, where she is on sabbatical.

She also pointed to Washington’s relations with Saudi Arabia as having a blinker effect on American understanding of Riyadh’s role in perpetuating and worsening the crisis in Yemen.

“Many in the U.S. tend to view the Saudis as steady allies of our country, so that Americans’ understanding of culpability is very murky,” Moeller argued.

She also noted that Yemenis “have been less vociferous on social media than they have from other Middle East crisis locations, so there are relatively fewer vetted images and eyewitness reports from the region than from other hotspots.” That could be due to the fact that there’s no internet access much of the time in Yemen. And it’s hard to remember to post on Facebook when you’re being bombed or dealing with severe hunger. 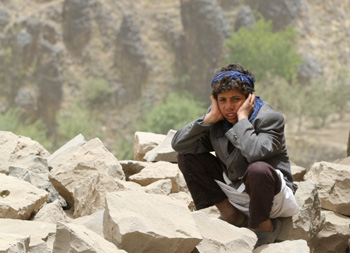 On April 4, 2015, a boy sits amid the rubble remains of his home, which was destroyed in an airstrike, in Okash Village, near Sanaa.

Moeller, who authored the 1999 book “Compassion Fatigue: How the Media Sell Disease, Famine, War and Death,” also pointed out that Yemen is competing with other crises for attention in newsrooms. But that fierce competition for attention is nothing new.

In chapter one of “Compassion Fatigue,” Moeller writes about the annus horribilis for humanitarian crises that was 1991.

“Disasters occurred all over the globe: Earthquakes in Soviet Georgia, Iran and Costa Rica killed hundreds and left tens of thousands homeless; a cholera epidemic in Peru killed more than a thousand and infected another 145,000; a cyclone in Bangladesh killed 138,000 and destroyed a million and a half homes; war in Iraq turned two million Kurds into refugees from Saddam Hussein and killed tens of thousands as they fled over the mountains; and famine and civil war in Africa killed hundreds of thousands and left 27 million at risk.”

International organizations and relief agencies spoke at the time of “an unprecedented spate of disasters.” The now defunct Newsweek magazine said there was not “enough money, manpower or sympathy to go around.” And New York Times reporter Elaine Sciolino lamented that, “Traditional donors, battered by so many appeals, are weary of pouring money into crises that never seem to go away.”

“The result is a discouragingly contagious compassion fatigue,” Sciolino concluded.

A generation later, there seems to be a new onset of the same fatigue, as crises that echo those that rocked the world in 1991 crop up in new places, but with the same old consequences.