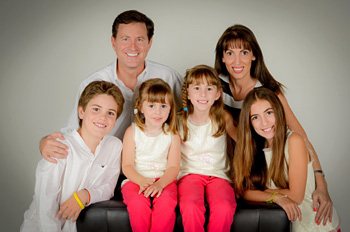 “From the time I was 8 years old, I knew I wanted to be a lawyer,” said Thais Gonzalez Carballada, the wife of Costa Rican Ambassador Roman Macaya Hayes. Even though neither of her parents were lawyers, nor any of her siblings, Gonzalez says, “I just knew.”

“We were six children when I was growing up. I was the fourth in the family and the oldest was a boy. Maybe that’s why I wanted to become a lawyer — to defend myself,” she laughed. “There still isn’t another lawyer. There are two economists, one architect and two flight attendants.”

Today, Gonzalez said her legal background — which includes nearly 20 years as a corporate lawyer — helps her navigate the minefield of her current home life, raising four children. “We do mediation with the kids,” she told us. “You find out, analyze. You don’t have to fight. And it helps you keep your mind open. I think sharing different ways of thinking is interesting. I love deep discussions about life.”

She added: “Everyone always asks me why I knew I wanted to be a lawyer. My reason … is that it is good to help people resolve problems. With laws, you do things a certain way, rules by the people.”

Gonzalez, who earned her bachelor’s of law degree from Complutense University in Madrid, will continue to learn about those rules this fall at Georgetown University Law Center, where she is back in the classroom to earn her master’s of law. In addition to readjusting to life as a student again, Gonzalez said she is toying with the idea of exploring other avenues of law besides corporate law. “Corporate law is like a transaction. You’re representing a corporation, not dealing with someone’s life,” she said.

In contrast to Gonzalez’s lifelong focus on the law, her husband’s career has been eclectic. Macaya has variously worked as a scientist, businessman, advocate, politician and academic. A chemist and biochemist by training, Macaya served as senior scientist at PharmaGenics, a U.S. biotechnology company that was acquired by Genzyme. He received a bachelor’s in chemistry from Middlebury College in Vermont, an MBA in health care management from the University of Pennsylvania’s Wharton School and a Ph.D. in biochemistry from UCLA.

Macaya spent years highlighting the strengths and weaknesses of the Costa Rican health care system, criticizing the economic and social consequences of ever-expanding intellectual property provisions on health care, agriculture and development, while engaging in numerous debates on how to strike a balance between incentives for innovation and the common good.

In 2009, Macaya ran for president of Costa Rica as an outsider against two establishment party candidates, with his wife serving as his strategic advisor and team coordinator. He didn’t win the nomination and for now, both of them remain coy about their long-term political plans. “For the 2018 elections, he is not going to run and for 2022, who knows.”

Gonzalez, a native of Spain, met her Costa Rican husband in Pennsylvania.

“We met in Philadelphia during the time I was doing an internship in a law firm there and he was studying for his MBA at Wharton. We met at a Latin American party where half the people were Americans. His English, with an American accent, was so good I thought he was an American, so I spoke to him in English. And he spoke back to me in perfect Spanish. I remember thinking he was very handsome, very smart and very down to earth. At the time, I think he was 29 and I was 25,” she recalled.

“We kept seeing each other at different parties and he would ask me out. I would say, ‘Who’s coming?’ — expecting to go as a group. I played hard to get and he played hard back.”

Eventually, though, they stopped playing games and got married in a civil ceremony in Costa Rica. “All the people we love participated. One year afterward, we had a church wedding in Madrid for my family and friends at home. But everyone else came — all the people who were at the first wedding.”

Likewise, their honeymoon was a group affair. “We had planned to go to Palma, Majorca, but more than a dozen of our friends wanted to come with us! We had an old house with 14 rooms, olive trees and we had a great time.”

Today, their home is similarly full. Daniela, 13, Roman, 11, and Adriana, 10, all attended the American International School in Costa Rica, so they arrived in D.C. with a good grasp of English. Valeria, 6, has had a more difficult time adjusting, according to her mother. “She was only 4 when we arrived two years ago and didn’t know English. But most of all, she missed our old nanny and Rufo, our bulldog. They don’t allow bulldogs on flights because of their flattened faces and trouble breathing.” 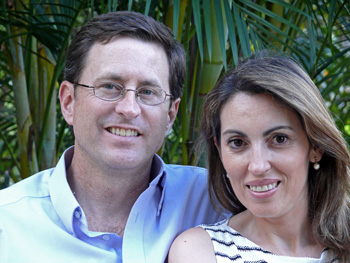 Costa Rican Ambassador Roman Macaya Hayes met his wife Thais Gonzalez Carballada in Philadelphia while he was studying at Wharton and she was interning at a law firm.

Gonzalez said that being an ambassador’s wife, mother of four and now a graduate student is a difficult balancing act, but she enjoys the challenge. “I do everything I can while the kids are at school or asleep. I divide my time as best I can. My husband and I also split up our time in supporting our kids with homework. We also rely on the parents of our children’s friends,” she said, noting that they also have a nanny who lends “tremendous support.”

Gonzalez, who said she likes to relax by cooking, said they make it a point to do activities together as a family. “We went skiing with the kids to White Tail [in Maryland] last winter. I skied when I was single in Spain. Roman is good at sports. He got his introduction to skiing at Middlebury College and even taught skiing for three months.”

They are also relishing their time in Washington, D.C. “I love the experience of living in an elegant, historic, international city. The family can enjoy the four seasons. In Costa Rica, we only have summer and the rainy season,” she said, although she admits, “I don’t like cold weather!”

Perhaps that’s no surprise given that Costa Rica is a lush tropical getaway, where many American retirees in fact have set up shop. But Gonzalez stressed that the Central American nation is an economically prosperous, democratically stable oasis with a hard work ethic and forward-thinking mentality.

“Maybe tourists think that everybody in Costa Rica lives a vacation lifestyle. However, the professional work ethic is very similar to the United States. Last year, Costa Rica generated 99 percent of its electricity from renewable resources. Our number-one exports are financial services for corporations. Our second is medical devices. We have very well-educated people,” she said.

“Costa Rica has practically universal health care coverage and social security for almost everyone. We are number one in English proficiency in all of Latin America and [have] the highest literacy rate in Latin America. We have more American students studying in our country than any other Latin American country,” she added.

“We are considered the happiest country on the planet, according to Happy Planet Index. ‘Pura vida,’ or ‘pure life,’ tells you how Costa Ricans feel about their country. They enjoy the beauty of nature and the good life.”