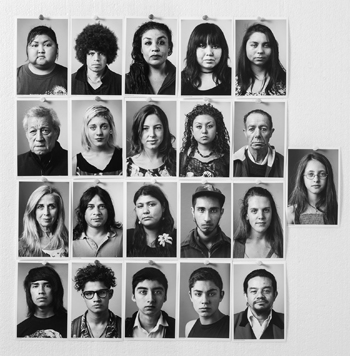 The face of any country is perpetually changing, so it’s only fitting that the latest exhibit at the Art Museum of the Americas is a work in progress, documenting social and cultural connections among the Chilean people.

Photos: Courtesy of the artist

Brantmayer’s “Muchedumbre,” which means crowd, recorded the portraits at different moments of contemporary Chilean history to examine the country’s collective identity. While all of the photos were captured using a similar method, with the same lighting and frame, they feature a stunning array of individuals — everyone from scholars, slum dwellers and sex workers to environmentalists, beauty queens, poets and maids.

“Muchedumbre starts from my own need to look at people, to come close and look directly at others who are finally standing up after years of fear,” Brantmayer said. “These faces interest me as maps of personal history and coexistence in the last years in Santiago.”

Yáñez said the human face itself is a powerful form of communication and that Brantmayer’s photographs possess that power in spades.

“The idea of the project is that all are photographed in [equal] conditions, of a similar shape, looking from front, with a look [that is] transparent and direct,” Yáñez said.

The result is a raw catalogue of diversity and emotion, often expressed as torment, anger and sadness. A parade of grim countenances stares back at viewers, unnerving yet intriguing them. Brantmayer said people often ask about his portraits and are curious to learn more about the subjects and what they do for a living. Despite their differences and mystique, the portraits all explore mankind’s intrinsic search for identity. 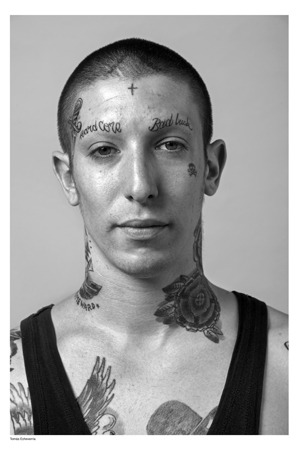 “A special psychological state of communication is created, which I find very important considering the diversity of complexions [and] looks that question you at the same time,” Brantmayer said. “This contributes to a sense of equality; we are all standing on Earth under the same conditions.”

The eyes and skin in Brantmayer’s elegantly simple black-and-white portraits seem to pulsate with meaning. While they scream of individuality, they also hint at the common human connection that binds people of different nationalities, faiths, races and ethnicities.

“I think it is of great help to see with justice and engagement what the other is all about,” Brantmayer said, noting that he hopes his work contributes to a conversation on pervasive racism and inequalities.

While Chile is changing, it remains a country of vast differences — and disparities. The long strip of territory bordering the Pacific Ocean and Andes Mountains has transitioned from the right-wing military regime of Augusto Pinochet to become one of South America’s most stable, economically prosperous nations. However, Chile, which was colonized by Spain in the mid-16th century, continues to evolve and grapple with its past. Brantmayer says the Pinochet years left a dark stain on his country, telling the Washington Post’s Express that Pinochet’s “dictatorship castrated our whole generation.” 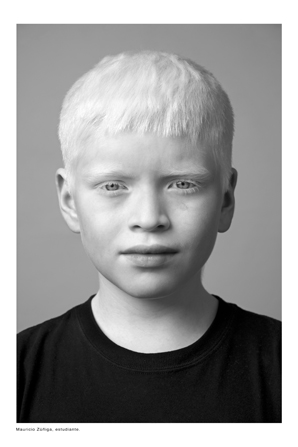 Brantmayer’s next project, “Skin Geography,” is composed of hundreds of portraits of what he calls the “new Chileans.” “Different people walk the streets, with other colors and traditions,” he said. “There is a different mood in the air that causes all kinds of different reactions.”

In framing issues of diversity, change and immigration, Brantmayer’s faces have universal resonance, mirroring debates happening in the U.S. and elsewhere around the world.

Brantmayer said he enjoys the ability of portraiture to convey larger messages and meaning. “I am interested in portraits as a geographical territory, which leaves marks and signs of its existence,” he said. “This constitutes a never-ending mystery and source of questions with no answers; there are layers and layers of history that agitate and interest me immensely.”

through Oct. 9
Organization of American States (OAS) Art Museum of the Americas