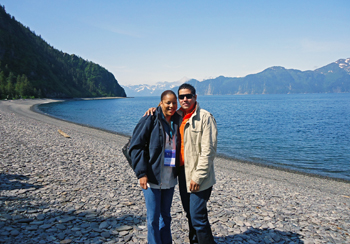 When Kamla Persad-Bissessar, Trinidad and Tobago’s new and first-ever female prime minister, chose Neil Parsan, a loyal supporter of her People’s Partnership political coalition, as her top envoy to the United States, she knew she was getting not one but two natural-born promoters for her twin island republic.

Both savvy in business — by education and by running successful businesses and working in finance — Ambassador Parsan and his wife, Lucia Mayers-Parsan, a former local hire for the U.S. Embassy in the capital of Port of Spain, immediately got to work promoting their country’s inviting culture and attracting more diversified businesses to their Caribbean paradise just off the tip of Venezuela. Although he was credentialed in February, Dr. Parsan, a former practicing veterinarian and one of the youngest ambassadors to ever represent Trinidad and Tobago, and the whole family have only been here for about a month.

According to the country’s foreign affairs minister, Surujrattan Rambachan, “Dr. Neil Parsan was selected our chief diplomat to the United States, Mexico and permanent representative of the Organization of American States because of his business acumen and diplomatic skills. His appointment represents the new paradigm of Trinidad and Tobago: change, business-focused trade diplomacy and planning for the future. He is bright and experienced with a keen eye for opportunities that fit the developmental strategies of our country.”

In fact, the twin island nation has not only been blessed with an abundance of natural beauty, it’s also been blessed with hydrocarbon resources, making it an economic powerhouse in the Caribbean — with a per-capita GDP of more than $20,000, one of the highest in Latin America. Trinidad and Tobago is the fifth-largest exporter of liquefied natural gas in the world and the single largest supplier of LNG to the United States, providing two-thirds of all LNG imported into the country since 2002, and currently supplying approximately 40 percent of U.S. imports.

The day after arriving in Washington to take up his post, Ambassador Neil Parsan of Trinidad and Tobago and his wife Lucia Mayers-Parsan headed to Alaska for a trip hosted by the State Department Protocol Office as part of its “Experience America” initiative, which takes foreign ambassadors to various U.S. states and cities to meet with public and private sector officials.

While serene and lush, the island of Tobago is much smaller, less populated and home to the nation’s tourism market. Trinidad, the size of Delaware, with a population of 1.3 million, drives the nation’s economy, attracting investment from international businesses thanks it its high growth rates and respected reputation. Some 150 U.S. companies have chosen to invest there, including Exxon, 3M, Citicorp, Burger King, Wendy’s and the country’s favorite fast food, Kentucky Fried Chicken.

“My husband loves KFC,” said Lucia, who holds an international MBA and has a background in business development and export-import services. “It is his favorite. At home we sometimes have KFC more than once a week,” she admitted.

But during their first few weeks in Washington, the couple has yet to find a KFC worthy of the same adoration. “Your KFC is not as spicy and crunchy as ours back home,” she said. “Of course, we love chicken in Trinidad but whether it’s our chicken or the spices they use there, our KFC is much better than what we have found here so far.”

Between us on the long yellow couch is their 3-year-old daughter Amaya, who also clearly likes a few American brands. The normally ebullient little girl had just fallen asleep moments after talking nonstop into her bubble gum-pink “Dora the Explorer” toy cell phone, with her very first stuffed Samantha Doll by her side.

Outside the Parsans’ residence on a hill overlooking Rock Creek Park from 17th Street, it was one of D.C.’s “dog days” of summer, with high heat and even higher humidity making it hard to do almost anything. That’s another thing that’s different between Washington and Trinidad, Lucia observed.

“Well, the temperatures are about the same but at home, since we are always on an island, we always have a breeze and the humidity doesn’t seem as bad. This summer is the first test but later this year, in the peak of winter, that will be my real challenge, the ultimate test,” she said.

“We arrived in Washington and the next day, we left for Alaska at 5:30 the next morning with the State Department and the other diplomats,” she recalled, referring to a June trip hosted by the State Protocol Office as part of its “Experience America” initiative that took dozens of ambassadors to meet with public and private sector officials in Alaska.

“I knew we were going so I put a couple of sweaters in my luggage but everything else was packed away for the move and hadn’t arrived in Washington yet,” Lucia said. “I did have to buy a coat up in Alaska but the cold wasn’t unbearable so that I needed hats and gloves. It was a wonderful trip. Alaska is breathtaking, or as some of the Nordic ambassadors on the trip said, ‘Alaska has even more impressive scenery than what we have at home in our countries.’

“I expected the breathtaking surroundings and great seafood but what pleased me most were the people,” she added. “Alaskans are so friendly and warm…. The tribal people are so simple and humble. Otherwise, everyone is from somewhere else: Our Alaskan cab driver was from Chile and there are so many Europeans you almost feel like you’re in Europe, except Alaska is not as sophisticated a place as the countries in Europe and there is a different history to the land, culturally and historically.”

Lucia, 40, is no stranger to North America, having visited Washington twice before for training programs tied to her work at the American Embassy back home. She also has three cousins who live here, while her older brother lives in Florida, her younger sister in Houston, and her older sister in New York.

Lucia is Roman Catholic but her husband was brought up as a Hindu — the two main religions in Trinidad and Tobago. The islands though are extremely multicultural, with a mix of religions and ethnicities. Many waves of indentured workers have landed on these sunny isles over the decades, the largest among them being East Indians and Africans, as well as Europeans, Chinese and even the Lebanese. 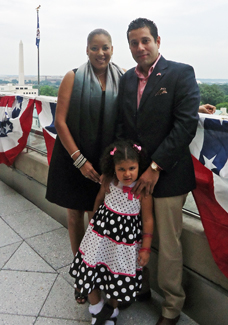 Ambassador Neil Parsan of Trinidad and Tobago and his wife Lucia Mayers-Parsan and their 3-year-old daughter Amaya arrived in Washington during one of the hotter summers in recent memory — which, Lucia says, “is the first test but later this year, in the peak of winter, that will be my real challenge.”

“We have a lot of holidays at home,” Lucia explained, “because we celebrate all holy days of all the religions represented: Catholics, Protestants, especially Baptists and some Pentecostals, Hindus, Muslims, Jews and even Mormons…. Our prime minister and all of us have different native clothes in our closet so we can easily dress for each special religious occasion. For instance, I have five or six saris and several Indian outfits with pants and skirts. I have two African caftans, too. Our own independence or national day is Aug. 31 — not a particularly good day to celebrate in Washington since it’s always so humid and hot here then and so many people are out of town.”

Nevertheless, Lucia is excited about being in the nation’s capital, not only because of the potential to help their country, but also because of the prospects of landing an interesting job in international business here while their daughter begins preschool.

Her husband also knows a thing or two about interesting jobs, having been a veterinarian, anatomy lecturer at the University of the West Indies, as well as a business consultant and director of several local and regional companies. He remains a director at the Arthur Lok Jack Graduate School of Business Alumni Board and vice president of the Private Hospital Association of Trinidad and Tobago.

“Anything is possible with him. Living with him is not boring,” Lucia said. When asked if he harbors any political ambitions, she raised her eyebrows and simply said, “His family has always been in politics.”

“I love his drive, his ambition,” she added. “He doesn’t settle for anything. He is passionate in what he believes but he is a Virgo man and he is extremely critical and stubborn. He is also is own worst critic.”

In response, the ambassador laughs and delivered a quick response: “She has been a tremendous support for me from the day we first met to now, as the wife of a diplomat. Her support and interest in what I am doing has not waned. She has a certain strength that I can always know that she is one of only two or three people who if I ask for something, I will never have to ask again or check on if the task has been done or done correctly.”

So how did these two first meet? “My 2-year-old dog Duke — a German shepherd mix — was very sick and I took him in because he wasn’t eating and I was worried,” Lucia recalled.

I asked the ambassador what he thought when he first saw her.

“That’s a sick dog — and that’s a beautiful woman.”

“He asked me for dinner that night and we were married three years later,” she said.

And now they both find themselves in Washington, minus the dog but with a daughter — and a very new life. After a career in medicine and business, this brand-new ambassador is obviously well versed in promoting all that his homeland has to offer.

“My job here is to remind as many people as possible that our twin island nation is a great value for not only tourism and eco-tourism, sailing and yachting, but our diverse society and fabulous winter carnival, which is second in the world only to Rio’s,” he explained. “We are a nation of multiple natural resources and a skilled, experienced workforce to handle many businesses — from the creative film industry to textile manufacturing and non-energy based industries like ‘downstream energies,’ including special chemicals like ammonia, methanol and urea. I want to help formulate and guide this principle growth while still maintaining our statehood and wonderful way of life. As we become more Western, we want our country to retain its heritage intact.”

He added: “My other role is to reach out to our large Diaspora — 500,000 — in New York, Miami and Ft. Lauderdale. We became a republic 50 years ago so on August 31 next year, we will have huge celebrations in all those cities. We have already begun planning the carnivals.”