Home The Washington Diplomat August 2011 From Lithographs to Guerilla Posters, a Thought-Provoking Ride 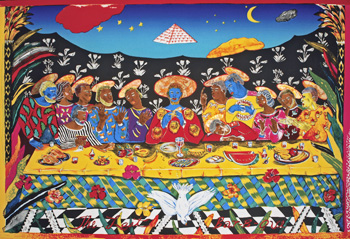 At the National Museum of Women in the Arts, lithographs from the Tamarind Institute in the exhibit “Pressing Ideas,” such as Margo Humphrey’s “The Last Bar-B-Que,” above, stand in stark contrast to the nearby work in “The Guerrilla Girls Talk Back,” below, in which gorilla-masked artist-activists use in-your-face posters to tackle sexism and racism.

It would be hard to imagine the three eclectic, edgy and completely unrelated exhibitions now at the National Museum of Women in the Arts being shown in any other venue, except perhaps the Katzen Arts Center at American University, which also stages highly divergent, offbeat exhibits at the same time. From elegant lithographs and paintings to shocking posters, going through the three exhibitions is like riding a wave of alternating currents whose only connection is, in a word, gender.

Not that I’m complaining. You couldn’t ask for three more diverse, inviting and rewarding exhibitions than “Pressing Ideas: Fifty Years of Women’s Lithographs from Tamarind,” “The Guerrilla Girls Talk Back” and “Susan Swartz: Seasons of the Soul.”

Any one of these exhibitions, including the relatively small (but large-scale) Swartz display of luminous paintings, would be worthy of an individual visit allowing for time and thoughtfulness to take each in. But taken together, a curious thing happens: Your intake process and experience adjusts to everything you’re seeing.

For instance, of the three, the exhibition of 75 lithographs by 42 women artists from New Mexico’s Tamarind Institute, founded in 1960 by artist June Wayne, requires work and study, as well as appreciation. It also doesn’t hurt to be interested in the process that goes into making fine art lithographs, which is helpfully explained in text, photographs and videos. At the Tamarind Institute, artists work with master printmakers to produce lithographs whose process is every bit as important, if not quite as fascinating, as the original spark of artistic inspiration and the visual result of that spark.

The exhibition is both thrilling and technical, exploring the soul and methods behind a complex chemical process that can be difficult, painstaking and filled with rewards for the printmakers themselves. This is not just about the final result but the glue, if you will, involved, and the details of wiping, adding, separating each color and running them individually through flat, specially prepared stones. But for someone who isn’t interested in the mechanics of a computer, or the engineering of a car, the process can be a bit much.

Fortunately, the works themselves are wonders. It also doesn’t hurt that this survey of 50 years of artwork features many recognizable names, including Judy Chicago, Elaine de Kooning, Louise Nevelson and Margo Humphrey, who conjured a witchy, particularly irreverent piece. Humphrey’s “The Last Bar-B-Que” is a vibrantly colored, folksy riff on the Last Supper punctuated by a bold night sky, bright tablecloths, a dove and a striking red watermelon.

The lithographs here are amazing, varied, and no doubt the process itself contributed to a kind of exactness of color, emotion and imprint. But looking at them, knowing that they’re all lithographs, matters less than the artistic endgame.

Switching over to “The Guerrilla Girls Talk Back” is indeed a big switch. Posters, newsletters, stickers and erasers make up more than 70 works by the Guerilla Girls, a group of anonymous, gorilla-masked artist-activists who use populist art to critique the sexism and racism they see pervading contemporary culture.

There is a consistency in the breadth and depth of work here, and the gut-punch emotional response it’s meant to elicit. These artists are in the feminist, agitprop business, who have not only produced inflammatory, funny, angry, in-your-face media works that expose gender bigotry and unfairness wherever they find it, but have of late dispersed into performance groups as well.

There’s less subtle analysis going on here than in the lithography show. The point is obvious — sexism, especially within the art world itself, and there’s plenty to scream about in loud poster art. Yet here too, though, you have to make an effort to take in the humor along with the serious messaging. It’s an energized sort of effort, because everything is big and brazen. You can practically hear the bullhorns at the demonstrations in these works.

The Guerrilla Girls emerged in the mid-1980s with posters, placards and ads that forced people to take notice with text like, “Definition of a hypocrite: an art collector who buys white male art at benefits for liberal causes but never buys art by women or artists of color.” Another flashy yellow poster depicting a gorilla-masked naked woman asks, “Do women have to be naked to get into the Met. Museum?” — noting that less than 3 percent of the artists at the Met were women, while 83 percent of the nudes were female.

You should take your time here, listening to the Guerrilla Girls telling truth to power. But the ride can be exhausting, so much so that by the time you make your way to the room barely containing the 13 paintings by Utah-based artist Susan Swartz, the effect is soothing, cooling and refreshing.

Swartz manages to capture the sun’s golden effect on forests seemingly lit from the inside, using her brush to depict the incandescent individuality of birch trees.

These abstract landscapes fill up the museum space much like actual trees in a forest. They’re spectacular, not so much as metaphor, but as reality. If the previous exhibitions are about manmade process and politics, this is about natural wonder, although even here, Swartz, a fervent environmentalist, aims to highlight issues of preservation.

The forest is a respite but it’s still a thicket of thought — and you’ll be doing plenty of thinking as you wander the halls of the National Museum of Women in the Arts.

The Guerrilla Girls Talk Back

Susan Swartz: Seasons of the Soul