Damián Siqueiros’s “Icaro I” is among the surreal digital prints by nine contemporary artists in “Possible Worlds: Photography and Fiction in Mexican Contemporary Art,” now at the Art Museum of the Americas.

In the compulsively fascinating exhibition “Possible Worlds: Photography and Fiction in Mexican Contemporary Art,” now at the Art Museum of the Americas, there’s an inordinate amount of hefty intellectual lifting going on, buttressing the stunning photographic work of a number of Mexican artists — but at times weighing down images that look ready to take flight into the wilder recesses of your dreams.

The exhibit was done in collaboration with the Mexican Cultural Institute in Washington, which is hosting its own massive photography show based on the National Geographic Society’s archives (see related story) — offering an interesting contrast between the National Geographic images that document Mexico’s evolution and the otherworldly images conjured by the country’s artists.

Curator Marisol Argüelles of the Museum of Modern Art in Mexico City has obviously given a lot of serious thought to the idea of photography as an artistic vehicle for creating alternative worlds, or “possible worlds,” where fiction and reality collide and erupt in ideas about what lurks behind and beyond our everyday surroundings. Here, that collision has sprung a series of photographs by nine Mexican artists who, in addition to their own vast imaginations and photographic skills, tap film, literature, fantasy, science fiction, electronic music and other contemporary influences to create surreal worlds that speak to the possibility of the unknown.

“I looked at many photographs and works, and artists, and I wanted to explore the ideas of photography as emerging from its prison of what you call documentarian traditions — that it deals in reality, that it documents and shows the world as it is,” Argüelles explained. “These photographers have clearly moved beyond that. They try to show worlds that exist and come from the human mind, not the observable world.”

Argüelles, in the exhibition’s wall texts, has enlisted quotes, epigrammatic selections and references that are often provocative and sometimes impenetrable — a maze of words by philosophers, academics and poets to complement the artwork on display. It’s an interesting selection of supportive ideas by a literary cast of characters, from Roland Gérard Barthes, the Frenchman who influenced schools of theory including existentialism and Marxism, to the great 20th-century Polish poet of resistance and hope Zbigniew Herbert.

Reading the quotes, you’re moved, especially by this one from Herbert: “An important part of contemporary art declares itself a partisan of chaos, gesticulates on the void or tells itself the story of its confined soul.” This observation, found in the “Apocalypse” section of the exhibit, comes from a man who experienced the invasion and occupation of his country by two of the most oppressive, violent political forces ever imagined: Nazism and Soviet-Stalinist communism.

Yet deep thoughts aside, many of the works hardly need words to express their visceral impact, which sometimes isn’t so much noble as it is uninvitingly disturbing — the memories of dreams that aren’t easy to forget, barren post-apocalyptic landscapes, and contemporary pop fiction obsessions like creepy little sci-fi creatures. 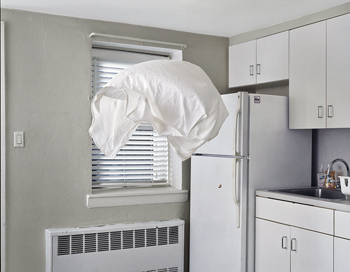 The notion though that photography is primarily a tool of realism and documentation seems to a somewhat false one from the get-go. Today’s photo-shoppers are hardly radical or new. Fiction is created the minute we click, crop and frame what appeals to our vision. To create fictional photography is just another step forward in the process, entering the swinging doors in and out of dreams.

Mauricio Alejo and Alex Dorfsman are clearly both conjurers, making the ordinary threatening, fantastical and illusionary — where a living room becomes a circus, sofas swallow arms, and a ghostly white sheet floats over the kitchen. Meanwhile, Kenia Nárez tracks a girl in a barren landscape with an equally barren, naked sheep bereft of fur clung to her back, looking like an alien backpack.

I particularly liked Damián Siqueiros’s visions of groups of people, vaguely human and very anxious, rearranging themselves like a deranged company of impoverished dancers.

Daniela Edburg’s works almost encapsulate the exhibition, and excite nothing less than memories of personal dreams. In her exquisitely arranged, posed and constructed photographs — that look nothing less than Vanity Fair fashion shoots of the conceptual kind — a family cheerfully picnics against the specter of a nuclear mushroom cloud in the distance just before it incinerates their superficially pleasant landscape. The people in Edburg’s photograph — filled with lush colors and happy consumers — are stylish even when they’re not entirely in the frame.

Dreams, and nightmares have of course changed. When the baby boomers were young, this vision of nuclear calamity was a constant fear, no more so than during the Cuban missile crisis, when all-out nuclear war was a very real possibility. It never happened, but we continued to dream the imagery. Today’s images though have turned the less-than-merciful cloud into something chic, like a pulverizing handbag, yet another accessory.

We may no longer think of atomic mutants stomping out entire cities, but we still enjoy imagining relentless ghouls for some reason. Thirsty vampires and love-struck werewolves never go out of style. Nor do these possible worlds, or the possibility of the surreal where what’s “real” is in the mind of the beholder.