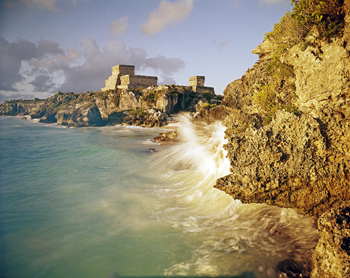 Among the more than 130 photographs in “Mexico Through the Lens of National Geographic” are a birthday procession in Oaxaca by David Alan Harvey; as well as Harvey’s image of the Tulum ruins at first light.

The iconic publication is, of course, known for its vivid, arresting images of native people from all around the world. But National Geographic has a special affinity for Mexico. In fact, feature articles accompanied by photographs of Mexico and its people have graced no fewer than 150 editions of the glossy magazine over the last 100 years.

Now, National Geographic has teamed up with the Mexican Cultural Institute to present a special exhibition of the magazine’s Mexico-themed photography documenting the country’s history, culture, people and landscapes. The exhibition includes 132 photographs — in stark black and white and bursting color — drawn from the National Geographic Society’s archives in Washington.

You’ll want to make time — at least an hour — to take in this expansive, thought-provoking exhibition, curated by Juan García de Oteyza and Christina Elson. It’s organized into seven different sections on two floors of the institute. Together, the photos offer an intimate view of a country many of us romanticize and even stereotype, but don’t fully understand.

Photos on the first floor showcase the heroic discoveries of late 19th-century explorers, and especially the discovery of Mayan ruins. A pair of photographs shows ruins in the Palenque archaeological zone located in the southern state of Chiapas near Guatemala. A black-and-white photo captures the ruin as it was discovered, covered in dense foliage and looking like something out of an Indiana Jones film. A color photo next to it depicts the site after restoration and preservation. It’s a visually compelling case for continued investment in archaeology and preservation. 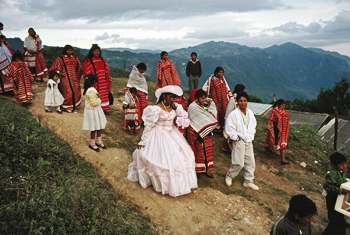 The Mayan section also features stunning images of sites paired with artistic renderings. National Geographic has been a long-term supporter of Maya research, and these carefully crafted images reveal the evolution of our knowledge of ancient Maya writing, art and architecture, beliefs, and daily life.

Nature lovers will want to linger in this section, which is replete with images of Mexico’s spectacular beauty and stunning geography. A photo of a monarch butterfly resting near a pool of water is simultaneously simple and complex, as the fragile, lone creature shows off its intricate, beautiful markings with a mirrored image reflecting from the water.

Similarly, stark white whale bones jutting from the sand near a lagoon in Baja, California-Mexico evoke thoughts of prehistoric beasts — and the notion that we are all mortal, no matter how big and powerful we might be.

The more sinister side of nature is also on display, most memorably in the breathtakingly beautiful image of the Popocatepetl volcano rising above a church on a pyramid in Cholula, Puebla. The image — captured at either sunrise or sunset, it’s hard to tell — is perfectly composed, with the snow-capped peak straining toward the top of the frame and a cool, blue-tinged mist hovering along the bottom, making it look as if the volcano is floating in air.

Viewers in this exhibition will be consistently struck by the vibrant colors of Mexico, whether they be in the landscape or in the clothes that Mexican people wear. A cheerful young woman photographed in Chiapas carrying a gourd filled with flowers is a vision of lovely hues, from the white flowers to the yellows, blues and greens in her vivid blouse. 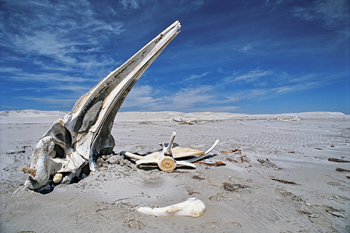 Whale bones washed up beside a lagoon in Baja California-Mexico.

Sartorial pageantry is also on display in a photo called “Trique 15th Birthday Celebration.” In it, young women and men dressed in traditional garb exploding with color move down a mountainside — a procession of happiness.

A more contemporary-seeming view of Mexico can be found in a portrait of a home in Zona Pedregal in Mexico City in the 1960s. Several women clad in what was then-modern clothing perch outside a home constructed with the clean lines and contemporary stylings of something one might have found in Southern California at around the same time.

However, hardship finds a home in this exhibition, as well. One of the most iconic images here is that of an 80-year-old basket weaver in Chihuahua. The woman’s grimacing face is tightly framed, peeking out from underneath a drab head covering. It’s a face etched with years of toil, the crevasses so deep as to almost be disturbing. Yet like the others, this old woman wears vibrant colors proudly, her bright orange poncho lending vitality to her world-beaten — yet determined — visage.

The exhibition also trots out some old photographic tropes — the lady making tortillas and people carrying things, for example — that have come to define foreigners’ perception of the Mexican people and their way of life.

But thankfully, the show goes much deeper than that, providing us with a penetrating view into a proud nation and a society that offers so much more than popular culture would sometimes have us believe.

Mexico Through the Lens of National Geographic