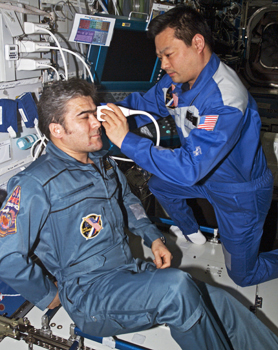 While the end of NASA’s 30-year space shuttle program that carried astronauts into orbit is mourned, or perhaps applauded by some, its demise may be greatly exaggerated. Not only does NASA have its eye on deep-space missions to places like Mars, private companies, largely funded by the space agency, will still propel astronauts into Earth’s orbit. But perhaps one of the most indelible imprints the program has left on mankind is the science developed aboard shuttle flights and the International Space Station — which may be transforming the lives of people back on Earth.

Former International Space Station Commander Leroy Chiao performs an ultrasound exam on his Expedition 10 crewmate, Russian Cosmonaut Salizhan Sharipov, as part of a project to develop techniques for non-physician crewmembers to conduct ultrasounds while in space — research that has also revealed the possibilities of ultrasound technology in telemedicine.

In fact, as the Atlantis space shuttle lifted off from Florida’s coast on July 8, a remarkable scenario was unfolding along the Pacific coast of Nicaragua in a region called Tola. Two days after the launch, an international team descended on the rural town of Las Salinas to deliver a health care technology that had its genesis on the International Space Station.

The medical team of doctors, mostly from the United States and Italy, is working with a nongovernmental organization called the Mission of Grace Foundation along with indigenous Nicaraguans, local authorities, regional hospitals and Nicaragua’s Ministry of Health to train doctors, nurses, villagers and even farmers in a revolutionary ultrasound technology, then linking them with health practitioners around the world using Internet-based telemedicine communications, mostly in the form of video conferencing.

The hope is that this high-tech tapestry of people, Internet and institutions will bring modern diagnostics and health education to all parts of Tola. The idea is to strengthen the region’s existing medical structures using outside help that will then be continued by Nicaraguans themselves.

Telemedicine is transforming health care around the world, connecting patients and doctors through interactive audiovisual media that allows someone from a remote town in Kentucky, for instance, where specialists may be hard to come by, to consult with a top-notch doctor at a New York hospital. The field is still evolving as experts debate the pros and cons of consulting and conducting medical exams from afar, but already, ever-more sophisticated technology is building on the backbone of telemedicine — producing results that once seemed out of this world.

One of the people helping to take health care into unchartered territory is Alberta Spreafico, outreach strategist at the Henry Ford Health System in Detroit and the director of sustainable development for Winfocus, the World Interactive Network Focused on Critical UltraSound based in Milan, Italy. Both Winfocus and Henry Ford are at the heart of the Tola team and behind similar endeavors in Honduras, Mozambique, Lesotho, Madagascar, Brazil, India, China, Congo and Malaysia.

A prime example is the Winfocus Global Ultrasound Program, which has had a presence in 50 countries over the last seven years, training more than 30,000 people in emergency medicine and primary care to perform ultrasound procedures — which use high-frequency sound waves that are beamed into the body, causing return echoes that “visualize” organs and structures beneath the skin. Health care professionals use these images to view the heart, blood vessels, kidneys, liver and other organs, as well as the fetus in pregnant women. And unlike X-rays, ultrasound does not involve exposure to radiation.

So how did this advanced imaging technique appear in a Nicaraguan town? It all started high above the clouds, in outer space.

Ten years ago, with long-range space travel and inevitable accidents in mind, NASA needed a way to get more diagnostic information about injured or sick astronauts back to Earth. They turned to Dr. Scott Dulchavsky, chairman of surgery at Henry Ford Hospital who became a member of NASA’s National Space Biomedical Research Institute (NSBRI).

“We did not have X-ray machines or CT scans in orbit and didn’t plan to, but we did have ultrasound on the space station,” he said.

But it wasn’t that simple. Ultrasound, though cheaper than other imaging procedures, was typically limited to scans of the abdomen and pelvis. Its hand-held scanner emitted sound waves that bounced back to make pictures of tissues or organs on a screen, but the waves were easily blocked by air or gas, the pictures sometimes lacked contrast, and a radiologist was needed to analyze the images. Worse, an ultrasound unit was big and bulky (even the one in orbit weighed in at 170 pounds), and ultrasound training took more than 200 hours.

“Everyone said we couldn’t [widely] use ultrasound,” Dulchavsky recalled. “But I made it my mission.” 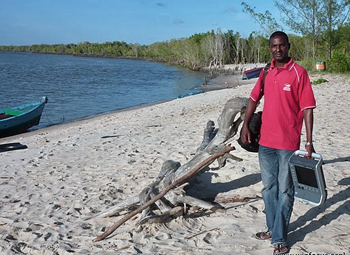 Based in Milan, Winfocus (the World Interactive Network Focused on Critical UltraSound) has trained more than 30,000 people in emergency medicine and primary care to perform ultrasound procedures throughout the world, including rural settings in nations such as Mozambique.

Dulchavsky developed novel methods of analyzing ultrasound images, commissioned new software and hardware, and, with help from commercial partners, pushed for smaller machines. Finally, by using educational videos and computer-based training, he slashed the learning curve for a practitioner to be able to analyze ultrasound images down to about three hours.

“We trained custodial personnel to conduct ultrasound exams. After about five minutes, they had a diagnostic accuracy in the high 90s,” said Dulchavsky, whom one colleague described as a “bulldog.”

NASA called his project Advanced Diagnostic Ultrasound in Microgravity (ADUM) and tested it on the International Space Station (ISS). It logged 80 hours of orbiting exams between 2003 and 2005, leading to an atlas of the normal human body in space (it’s not the same as yours or mine), a “pocket book” ultrasound exam guide, and terrestrial spinoffs of the technology.

In fact, Space Station science has produced more than 1,000 scientific investigations — from chemistry and bioengineering to electronics and medicine — many in collaboration with NASA’s international partners in Canada, Europe, Russia, Japan and Brazil, and this research has yielded more than 300 scientific publications so far to inform future missions beyond Earth’s orbit as well as various projects closer to home.

The Johnson Space Center in Houston trained astronauts to use Dulchavsky’s methods in space while receiving guidance from researchers and flight controllers on the ground. One of the testers was NASA astronaut and ISS Expedition 10 Commander Leroy Chiao, a chemical engineer with expertise in aerospace materials and space telescopes. He now works with NASA to evaluate space-station science and medical projects.

Chiao flew four missions on three shuttles — Columbia, Endeavor and Discovery — and conducted four spacewalks. He worked on ISS assembly and “tightened bolts” on the second walk and installed science experiments in 2005. That year, his work inside the space station also yielded sophisticated ultrasound images that hadn’t been done before — pictures of teeth and eyes, while floating in space.

“We were seeing what ultrasound could do,” Chiao told The Diplomat. “We had a link to a physician on the ground who would say, ‘OK, that looks pretty good. Now move the probe to the right.’ It was telemedicine.”

It was also telemedicine on a whole new level.

“We had shown it would work in the austere environment of space,” said Dulchavsky, who further tested the technology in extreme environments on Earth. In 2008, he diagnosed pulmonary edema in a climber on Mount Everest from his office in Detroit, and thanks to a newly portable ultrasound machine, a pregnant Inuit woman in Canada had a reassuring checkup from Chiao from the comfort of her home. Detroit’s hockey team started using the portable ultrasound to look at injuries without making a trip to a hospital, and before long the U.S. Olympic Committee began using its diagnostics worldwide.

Dr. Luca Neri had seen the potential of portable ultrasound as a new doctor working in Mozambique. In 2004, the Milan-based doctor founded Winfocus with an emphasis on incorporating ultrasound into emergency and primary care in places with limited medical resources. He immediately contacted Henry Ford Health System and joined forces with Dulchavsky in 2006. Today, Neri, Dulchavsky and Spreafico manage the Winfocus team’s sustainable development projects, traveling the world and personally participating in local training sessions and international conferences.

“Most of mankind is living with resource-poor primary care,” Neri recently wrote in an email to The Diplomat. This problem, he said, can be mitigated with inexpensive portable ultrasounds, which he called “the stethoscope of the future” — capable of greatly improving the “blind, risky and costly” emergency procedures commonly used around the world.

Winfocus’s work has attracted the attention of the United Nations, with Neri and Spreafico recently presenting a progress report to the 2011 U.N. Infopoverty Conference.

Like the space program itself, Neri aims high: “We are creating a new paradigm,” he said. “We’re reimagining health care accessibility … throughout dozens of countries [for] hundreds of thousands of people worldwide.”