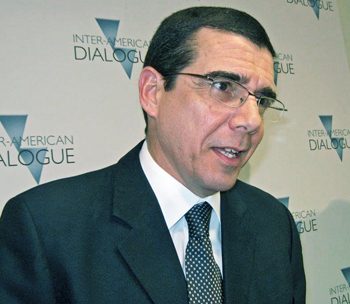 Cuba’s top diplomat in the United States, José Ramón Cabañas Rodríguez, may be a man of his time. The youthful-looking Cabañas, who’s not much older than the Cuban Revolution, was dispatched to Washington at a time when U.S.-Cuba relations are stuck in a timeless deep freeze.

He has a reputation for being shrewd and intelligent, with a knack for pressing Cuba’s agenda and making important connections to the Cuban exile community. Those skills may serve him well if the political winds shift and Cuba’s relations with the United States warm before President Obama leaves office in January 2017.

Speaking at an April 4 seminar in Washington hosted by the nonprofit Inter-American Dialogue, Cabañas deflected pointed questions while defending Cuba’s policy on a wide range of issues — from U.S. food sales to emigration — in nearly flawless English.

But the cautious Cabañas also made sure to keep expectations low. He said he expected bilateral relations to improve “in this century.”

Despite the rather bleak prediction, Cabañas, who in November replaced the now-retired Jorge Bolaños as chief of the Cuban Interests Section, said Washington and Havana could cooperate in several specific areas such as climate change, drug trafficking, immigration, tropical diseases and environmental issues.

At the same time, Cabañas suggested that his country would reduce the number of commodities purchased from U.S. markets. Agriculture had been one bright spot in relations after Congress amended the trade embargo in 2000 to allow agricultural exports from the United States to Cuba. In 2008, U.S. companies exported roughly $710 million worth of food and agricultural products to the island nation, according to the U.S.-Cuba Trade and Economic Council. But in 2012, that number plummeted by roughly half.

The problem, Cabañas said, is that U.S. law — specifically the Trade Sanctions Reform and Export Enhancement Act — obliges Cuba to buy food and agricultural products from the United States in cash before shipments leave U.S. ports.

“We have to look at other places and other markets,” he said.

Like all his predecessors, Cabañas condemns Washington’s 50-year-old trade embargo — which Cuban officials unanimously call a “blockade” — and blames it for many of the island’s problems.

While there’s little hope the embargo will be lifted in the near future, given the political clout of Cuban exiles in the United States, President Raúl Castro has instituted a raft of unprecedented reforms since formally taking over for his brother Fidel in February 2008. Travel restrictions have been lifted on Cuban citizens, the real estate and auto markets have been liberalized, and some small private enterprises are now allowed.

But as far as all the economic reforms approved by Raúl Castro, Cabañas said they are merely “adjustments to changes in the world,” not important policy changes.

Despite his conservatism, Cabañas has strayed where none of his predecessors dared to go.

During his short tenure in the nation’s capital, he’s already made himself accessible to Washington’s diplomatic and academic community, meeting with small groups at Georgetown University’s Center for Latin American Studies, at the Cuban Interests Section and other places.

Cabañas is also the first chief of the Cuban Interests Section who’s agreed to be filmed, said Peter Hakim, president emeritus of the Inter-American Dialogue. Both C-SPAN and Voice of America had cameras focused on Cabañas during his speech at the think tank.

“He might not have thought about publicity, but when it came, he decided to take advantage of it,” Hakim said, adding that the diplomat — a specialist in North American affairs — “knows what’s going on more than anyone else from Cuba.”

Bolaños, the man Cabañas replaced, headed the Cuban mission in Washington for nearly five years, a period that coincided with President Obama’s first term in office. When Bolaños was vice minister of Cuba’s Ministry of Foreign Affairs, Cabañas was his assistant.

Not much is known about Cabañas’s personal life, other that he’s a native of Matanzas who’s married and has two children.

Then he was called back to Havana to serve as deputy director of the North American Affairs Division at Cuba’s Ministry of Foreign Affairs, later transferring to the Division of Cuban Residents Abroad. Cabañas worked a while in Europe too, serving as Cuba’s ambassador to Austria from 2001 to 2005.

He was once again brought back to Havana in 2005 and soon after promoted to deputy minister at the Ministry of Foreign Affairs.

“He seems more willing to communicate than his predecessor, but still takes all of his marching orders from Havana,” said an official at the State Department who asked not to be identified. 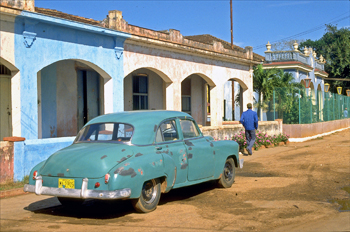 Classic 1950s American cars can be found throughout Cuba — such as this one in Puerto Rico Libre, a sleepy sugar-mill town in Cuba’s Matanzas province — a strange relic of Washington’s 50-year-old trade embargo against the communist island.

Bolaños, who was 70 when he took the job of representing Cuba in Washington, is of a different generation and during his time here made sure to steer clear of the press.

Hakim said Cabañas reminds him of Fernando Remírez de Estenoz, a former Cuban chief of mission who served in Washington from 1995 to 2001. Remírez was young, accessible and erudite and had a firm grasp on U.S. politics and American culture.

While Cabañas is viewed as more open than the man he replaced, the newly arrived diplomat still has a wide dogmatic streak.

At the Inter-American Dialogue event, he ignored a reporter’s question about defecting Cuban ballet dancers and repeatedly referred to Yoani Sánchez, the prominent Cuban dissident blogger, as “that lady.”

Cabañas complained that Sánchez, who was in Washington as part of a 12-country tour, was getting a lot of press and that American singer Beyoncé, in Havana with her husband Jay-Z to celebrate a wedding anniversary, was being ignored. That, of course, was before anti-Castro exiles raised a ruckus over Beyoncé’s visit.

Meanwhile, Cabañas seems to be a man waiting to be able to do more.

One of his first official acts in Washington concerned Alan Gross — the biggest obstacle to better bilateral relations.

Gross, a 64-year-old subcontractor for the U.S. Agency for International Development, was arrested in December 2009 while trying to leave the country and later found guilty of subversion. He’s now serving a 15-year jail term in Havana, despite two years of efforts by his Maryland family to get him released.

“To demand from and hope for the Cuban Government to take the unilateral decision of releasing Mr. Gross without giving any consideration whatsoever to the legitimate concerns of our country is not a realistic approach,” the letter said. “Mr. Gross violated Cuban laws by carrying out covert activities aimed at destabilizing Cuba and subverting Cuba’s constitutional order, for which he was paid hefty amounts of money by virtue of a contract funded by the U.S. Government. These actions are considered illegal not only in Cuba but also in many other countries including the United States.”

Washington rejects the correlation, however, and as with so many other issues, the two sides refuse to budge.

“They were and have been attempting to trade Alan Gross for the five spies that are in prison here in the U.S.,” Secretary of State John Kerry told the House Foreign Affairs Committee in April. “And we’ve refused to do that because there’s no equivalency.”

Ana Radelat is a freelance writer in Washington, D.C.