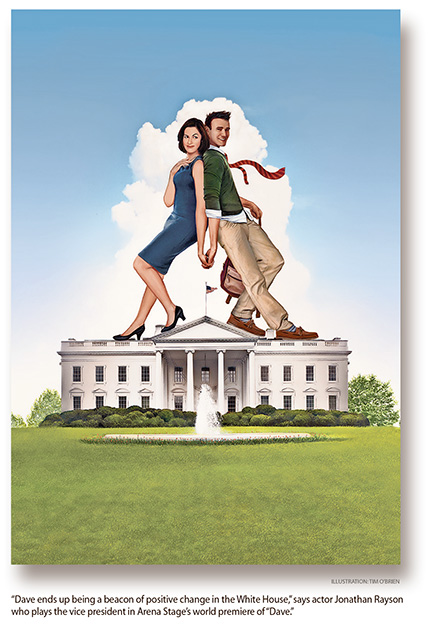 What is the answer to America’s current political nightmare of divisiveness and dishonesty? Would these problems all just go away if the country elected an average, unassuming guy as commander in chief?

“Dave,” a musical comedy based on the 1993 motion picture written by Gary Ross and starring Kevin Kline and Sigourney Weaver, plays out this assumption, with feel-good results.

Through a series of events, the character Dave Kovic, a kind-hearted high school teacher, Abe Lincoln enthusiast and presidential look-alike, is hired by the Secret Service as a stand-in for the real president, Bill Mitchell, when the president falls ill under less than “presidential” circumstances. Dave is thrust into the Oval Office to avoid a national scandal and must find a way to gain the trust and love of the American people — and the first lady.

“Dave ends up being a beacon of positive change in the White House,” explains actor Jonathan Rayson, who plays the vice president in Arena Stage’s world premiere, which runs from July 13 to Aug. 19.

“No matter what side of the aisle you are in the world of politics, many times people feel unheard, feel they can’t make a difference and aren’t represented. This show speaks to coming together for the greater good, no matter your political beliefs,” Rayson told The Washington Diplomat.

Set in Arena’s Kreeger Theater with Tina Landau as director, “Dave” stars Drew Gehling (“Waitress,” “Jersey Boys”) as both President Bill Mitchell and the title role. “Dave” is being produced in association with Warner Bros. Theatre Ventures, the Donners’ Co. and Larger Than Life Productions.

“The story of ‘Dave’ is the stuff of musical theater perfection. Like a wonderful fairytale, it helps us explain the world — in this case the world of Washington politics — giving us the escapist tools yes, but also reminding us of the better angels embedded in us all,” said Arena Stage Executive Producer Edgar Dobie. “It is joyful and hopeful and reassuring all at the same time. If it is all in the timing, then we timed this one right!”

The play indeed points to many parallels to today’s politics.

For one, the president is a callous womanizer and his substitute must go undercover to clean up the White House’s public image.

“The show took on a different shape when the new [Trump] administration came in,” Rayson said. “We bumped up the relevance of the show to today’s political climate. We have the president tweeting where you don’t know what are facts and what are ways to spin the facts so the administration looks good. We even have someone in the administration filing for impeachment. These are things not introduced in the original film, to echo what is happening today.” 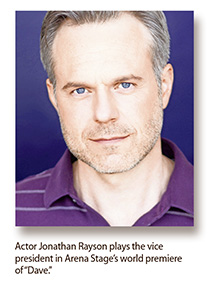 The decision to make the original script a musical allowed the creators to bump up the comedy and drama of the play, Rayson added.

“The characters sing out the inner workings of their thoughts and feelings that they wouldn’t overtly say to the audience. Making this show a musical raises the emotions of the characters and introduces silliness to the piece,” he said.

Rayson said that the play turns today’s dirty politics on its head and adds gratifying fantasy to the equation.

“It’s a lot of fun,” he told us. “It’s just what the country needs right now and the play is so appropriate to Washington audiences. It’s also a love story … a feel-good piece about people coming together for the common good.”

Unlike today’s toxic atmosphere in Washington, for a few hours at least within the four walls of a theater, this production will prove that politics can indeed be funny and heartfelt.