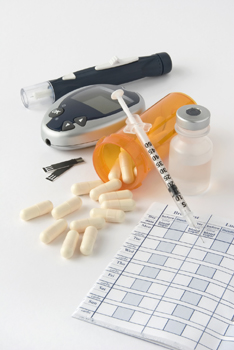 In 2001, approximately 1 million people on the planet died from diabetes. This year it’s going to be 4 million. Although the United Nations sounded a major alarm about the disease in 2006 and asked the world’s countries to address it as a medical crisis, the diabetes numbers keep going up — and not just in high-income countries, but throughout the developing world.

Death is the ultimate, but not the only danger from diabetes. Because the disease harms blood vessels, it’s the leading cause of blindness and amputations in the developed world and the leading cause of heart attacks, stroke and kidney disease worldwide, reports the International Diabetes Federation (IDF), which estimates that 285 million people around the world have diabetes — a number expected to rise to 438 million within 20 years.

It’s not a great mystery as to what’s fueling the rise: aging and urbanization. People are living longer, they’re eating more and exercising less — and as a result, obesity has become the key cause of diabetes among adults. Genetic factors and biological differences among populations also play a part, but nobody’s quite sure how that works yet.

Diabetes is a chronic disease marked by high levels of sugar in a person’s blood. Sugar in the form of glucose traveling through the bloodstream is the human body’s major fuel. Insulin, a hormone made in the pancreas, manages the flow of glucose into the tissues and cells of the body, lowering the amount of blood sugar in the process. If the pancreas doesn’t produce enough insulin or if the body loses the ability to use insulin efficiently, glucose builds up in the blood and creates havoc.

High glucose levels in the blood damage blood vessels and nerves. They can narrow arteries and create problems with blood flow to the brain and to the heart — which explains why the leading causes of death among adult diabetes patients are heart disease and stroke.

But the problems don’t stop there: Diabetes is also the leading cause of kidney disease worldwide. In addition, diabetes-induced damage to blood vessels in the eye can result in retinopathy or glaucoma and eventual blindness, while nerve and blood vessel damage and narrowing of the arteries in the legs can lead to damaged tissues in the foot and eventual amputation.

Diabetes was once considered a problem largely confined to economically advanced nations. However, an Australian study funded by IDF and published last November looked at every country on the planet and predicted that developed nations would see a 20 percent increase in the number of adults with diabetes between 2010 and 2030 — but that developing countries would see a stunning increase of 69 percent.

The study, “Global Estimates of the Prevalence of Diabetes for 2010 and 2030,” showed that the region with the highest prevalence of diabetes remains North America, with Canada at 9.2 percent of its population, the United States at 10.3 percent, and Mexico at 10.8 percent. But the region labeled “Eastern Mediterranean and Middle East” is close behind, with Saudi Arabia, at 16.8 percent, posting the highest diabetes rate in the world. Egypt meanwhile stands at 11.4 percent, while Sri Lanka (10.9 percent) and Malaysia (11.6 percent) have the largest numbers for Asia. However, the study said that every region will experience an increase in the disease, “well in excess of adult population growth.”

The figures for China have already gone up. A major study of diabetes in that country published by the New England Journal of Medicine this March revealed that 9.7 percent of the adult population has diabetes — for a total of 92.4 million people. Conducted by investigators from Tulane University and their colleagues in China, the study also found that 15.5 percent of the population is pre-diabetic.

The IDF-sponsored study had set the prevalence of diabetes in China at a relatively modest 4.5 percent, but the Tulane researchers found undiagnosed cases by fanning out across the country and administering more than 46,000 oral glucose tolerance tests.

The research team, headed by Dr. Jiang He, a professor at Tulane’s School of Public Health, attributed the epidemic to China’s rapid economic advancement, noting higher diabetes rates among urban residents than rural populations. They also pointed out that this phenomenon fits in with observations made in other developing countries around the world.

Here in the United States, where diabetes has skyrocketed in response to the obesity epidemic, the outlook isn’t that much brighter — in part because of the country’s aging baby boomer generation. Researchers with the University of Chicago reported in December that a new estimate of future diabetes cases in the United States is “more troubling” than previous predictions, with the number of cases expected to nearly double by 2034 from roughly 23 million Americans living with the disease today to 44.1 million.

The University of Chicago report also focused on cost and was designed to provide information for American policymakers. It predicted that U.S. spending on diabetes would triple, rising to 6 billion by 2034 and pushing Medicare costs from billion to 1 billion.

“The public policy implications are enormous,” said co-author Michael O’Grady, describing the findings as “a serious challenge to Medicare and every other health plan in the country.”

Those tremendous costs are being replicated around the globe. To support efforts to devote more resources into diabetes prevention, researchers in Australia, Britain and the United States compiled detailed information about the costs of diabetes complications in middle- and low-income countries and published them next to comparable data for high-income countries.

In short, “major diabetes complications are a huge economic burden to health care systems around the world.”

The IDF is also working to hammer that point home to all nations around the world. “It is now recognized that it is the low- and middle-income countries that face the greatest burden of diabetes,” the group wrote in its most recent “Diabetes Atlas.”

“However, many governments and public health planners still remain largely unaware of the current magnitude, or, more importantly, the future potential for increases in diabetes and its serious complications in their own countries.”

IDF also notes that “unlike some other diseases, treatment exists for diabetes, and if managed correctly, is very effective in reducing complications such as heart attacks, amputations, blindness and kidney failure. Many of the essential medicines for diabetes and the other non-communicable diseases cost just pennies to produce.”

The group concludes: “Governments, civil society and people with diabetes have to work together to ensure that accidents of geography and history do not determine who should live or die because of inadequate access to optimal care and treatment, and essential medicines.”