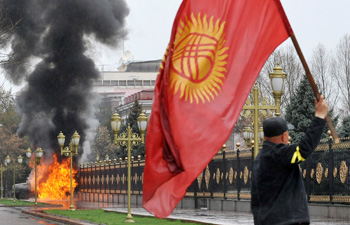 TBILISI, Georgia — As popular democratic movements and peaceful transitions of power began popping up across the post-Soviet space earlier this decade, Western powers and pro-democracy groups rejoiced as years of efforts to democratize former Soviet republics seemed to be bearing fruit.

But as violent protests toppled the government of Kurmanbek Bakiyev in Kyrgyzstan last month, the second of three promising democratic movements was definitively reversed and the outlook for the spread of democracy in the region darkened. In addition, a realization began to set in that the wave of so-called “color revolutions” were far more complex than the often black-and-white prism through which the world saw these local political movements.

A Kyrgyz opposition supporter waves the national flag during bloody protests in Bishkek on April 7 that toppled the government of Kurmanbek Bakiyev, who has since left the country and is now in Belarus — though authorities in Kyrgyzstan say they will press for the deposed president’s extradition.

In 2003, a protest movement in Georgia overthrew its president after fraudulent elections in the “Rose Revolution.” Similar events followed with the “Orange Revolution” in Ukraine in 2004 and the “Tulip Revolution” in Kyrgyzstan in 2005.

Each movement peacefully toppled an incumbent administration after international monitors found the government had falsified elections results to maintain power.

Many Western analysts saw these events as a sign of flourishing democracy in the region and a momentum shift that would bring more ex-Soviet satellites out of Moscow’s orbit.

Today, however, such hopes have dimmed. The political upheaval in Kyrgyzstan, Ukraine and Georgia has led many in the West to bemoan that the widely heralded color revolutions merely ushered in a revolving door of corrupt apparatchiks riding public anger to take charge, until they became as hated as their predecessors.

Indeed, the “new” governments in each country have either relapsed to authoritarian practices or been stripped of power — most notably in the violent clashes in the Kyrgyz capital of Bishkek, which left more than 80 people dead and were a far cry from the peaceful demonstrations of earlier years.

Federiga Bindi, a senior fellow at the Brookings Institution and the global governance advisor to Italian Foreign Minister Franco Frattini, said Western experts misinterpreted and “over-hyped” these movements from the start. “We somehow eluded ourselves that these revolutions were similar to the ones that took place in Central and Eastern Europe in the 1990s,” Bindi said.

The difference, she pointed out, was that the former Soviet countries that democratized quickly after the fall of the Soviet Union all had experienced either democracy or at least liberal governments in their past.

Emboldened by the successes of the 1990s, many Western governments and nongovernmental organizations pushed forward with attempts to spread democracy further and further east — to no avail, according to Bindi.

“I think if there’s one lesson we learned over these years it’s that you can’t export democracy. Wheat cannot grow anywhere — it can only grow where the conditions on the ground are satisfactory, and that’s the same with democracy,” she said.

The budding attempts at democracy that cropped up in Georgia, Ukraine and Kyrgyzstan have withered for varying reasons, however.

A high-ranking official in a pro-Western NGO operating in the former Soviet Union, who is not authorized to speak on the record, told The Washington Diplomat that Western powers are partly responsible for these countries’ remissions because of conflicting priorities and differing approaches to each nation.

He cited Kyrgyzstan, where the “greatest evidence of regression” has occurred, as the most notable example of this.

Indeed, many experts accuse Washington of turning a blind eye as Kyrgyzstan reverted to authoritarian rule under President Bakiyev, who was frequently criticized for his increasingly repressive policies and human rights violations.

But America’s immediate focus after the Tulip Revolution, the NGO official said, was on “whether [the Kyrgyz government] would permit the U.S. to pursue its interests within their borders, which was not necessarily tied to the development of democratic institutions.”

And those interests largely lie in the Manas Transit Center, a key U.S. airbase supporting military operations in Afghanistan. Bakiyev seemed to use the critical transit route to pit Russia and the United States against each other and extract concessions from both countries. Soon after taking power, he threatened to close the base if the U.S. government did not increase compensation for its use, citing fuel-dumping practices that damaged local agriculture and other incidents, including a mid-air collision with a Kyrgyz passenger jet.

Coincidentally though at the same time, Bakiyev secured more than billion in financial aid from Moscow. Yet just four months later, a new agreement was reached in which the United States would pay the Kyrgyz government million per year — more than three times the previous rent — leading many analysts to speculate that Bakiyev had essentially backstabbed the Kremlin by reneging on his decision to shut the base down.

Manas also illustrates the complex interplay of external dynamics and internal bread-and-butter issues that shaped Kyrgyzstan’s unrest. The Russian government — none too pleased with a series of Bakiyev snubs — signed a decree on March 29 eliminating subsidies on gasoline exports to Kyrgyzstan and other republics that had not joined a new customs union. Days later, Russian fuel shipments were suspended and gas prices in Kyrgyzstan began to climb.

So as much as the public was upset about corruption and nepotism in the Bakiyev regime, the sudden 200 percent price jump in residents’ energy bills was just as crucial in sparking the April mass uprising that usurped Bakiyev and installed a group of opposition politicians in power. Perhaps not surprisingly, Russia quickly reached out to that opposition and recognized the new interim government.

It seems Moscow also doesn’t mind the recent changeover in power in Ukraine, where the pro-Western coalition led by Viktor Yushchenko that dramatically took charge after the contested 2004 election was voted out of office this past February. In an ironic twist, Yushchenko was resoundingly beaten by Viktor Yanukovych, the pro-Russian target of the Orange Revolution who lost the presidency to Yushchenko, only to reclaim it after six years of debilitating political infighting.

In fact, during Yushchenko’s tenure, the Ukrainian government’s rating on Transparency International’s “corruption perceptions index” dropped from an already dismal 122 to 142 — the same rating as Zimbabwe, Sierra Leone and East Timor.

To that end, many experts say the West misjudged the challenges in a state as large, socially fractured and poorly governed as Ukraine. And again, this may have been a case where practical domestic concerns trumped grander geopolitical aspirations. While the West often framed the Ukraine debate in terms of whether the strategically important country would align itself with Europe or Russia, average voters were clearly more focused on the political stalemate, ailing economy and rampant corruption. Similarly, many voters felt robbed by the 2004 elections, widely marred by fraud, spurring the Orange Revolution, whereas the 2010 race was generally deemed free and fair by international observers.

Nonetheless, Maria Lipman, a political analyst at the Carnegie Moscow Center, said she views the Orange Revolution as having been a “relative success” and argues that the country’s political deadlock is not entirely a bad thing.

“Ukraine’s curse and blessing is that it is a nation divided. It is a curse, of course, because it is difficult for a nation to develop when its national identity is questionable, but it’s also a blessing in a sense that having this division [between] East and West, it is hardly possible for any leader to gain full political control and eliminate the opposition factor,” Lipman said, noting that she sees signs Ukrainian politicians are learning to reconcile their different visions for the country.

But of all three color revolutions, perhaps the one with the most conflicted recent history is Georgia, which has faced a series of political crises and a brief war with Russia that caused an estimated $1 billion of damage to the small Caucasus nation.

Despite the setbacks, the country, which remains committed to its goal of joining NATO and the EU, is also the one with the greatest potential for progress, the high-ranking NGO official told The Diplomat, citing Georgia’s small size and the West’s distinct approach to it.

“Georgia has the advantage of a strong, visionary leader who received significant funding [from international donors] largely without conditions, giving Georgia much greater flexibility to benefit from the transition,” he said.

This has led to an overall increase in the quality of life in Georgia, though at the same time it has not prevented the country’s fervently pro-Western leader from backtracking on reforms.

In 2007, President Mikheil Saakashvili’s government cracked down violently on opposition protestors and shut down independent media stations in a manner roundly denounced as disproportionate. In addition, last year, an EU report laid the blame primarily on Saakashvili for igniting the five-day war with Russia in August 2008 after Georgia attempted to regain control of South Ossetia, one of its two breakaway republics.

Moreover, in 2009, Transparency International, Reporters Without Borders and Freedom House all reported that Georgian society is now less free in every category except legal processes since Saakashvili — a U.S.-educated graduate of Columbia University and the George Washington University — has taken office.

Many say Saakashvili’s contradictory behavior is largely in response to Russia. “Leading figures within the [Georgian] government are constantly measuring the benefit of further democratic reforms against the need to fight the existential threat posed by Russia,” says the NGO official. “The government clearly views the opposition and independent media as part of that threat.”

Georgian officials regard NATO membership as a safeguard against further conflict with Russia, but it was this very goal that fueled the hostility from Russia toward the post-revolution governments of Ukraine and Georgia, the Carnegie’s Lipman pointed out.

Still, unlike Ukraine, Saakashvili clearly hasn’t given up the fight to further Georgia’s Western aspirations as he curries favor with the United States. Last month, three Guantanamo detainees were transferred to Georgia, and Saakashvili has publicly offered Georgian territory as a base for a U.S. missile defense shield — an offer that was declined.

Georgia will also be deploying nearly 1,000 troops as part of the International Security Assistance Force in Afghanistan, a significant contribution for a country of less than 5 million people.

However, these moves seem to have provided Georgia little headway in its attempts to join NATO. While visiting Georgia in February, U.S. special envoy Richard Holbrooke said that Georgia’s Afghan deployment was unrelated to NATO membership discussions, and that there would be “no quid pro quo” on the issue.

“There are clear indications of Georgia’s desire to join the EU through NATO, clear indicators of willingness for further reform,” the NGO official said. “The problem is they keep looking for shortcuts rather than committing themselves to a real set of reforms.”

But just as Georgia, Ukraine and Kyrgyzstan will ultimately have to figure out those reforms for themselves, Lipman said Moscow’s mentality will also have to evolve and adapt toward its neighbors.

“Russia is gradually — not easily — coming to terms with the idea that countries that used to be part of the U.S.S.R. are today truly independent and autonomous countries who decide for themselves who their allies are,” she said. “It was not an easy process for Russia to come to terms with, and it hasn’t completely, but I think it’s made progress.”

Nicholas Clayton is a freelance writer in Tbilisi, Georgia.