Home The Washington Diplomat May 2010 Immigration Debate Resurfaces, Though Prospects for Reform Dim 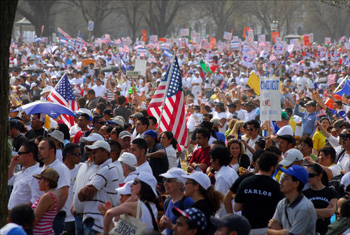 The debate over illegal immigrants is again rattling Washington from Capitol Hill to Embassy Row, where the Mexican ambassador has injected his country into the fray, warning that the forces of “prejudice, hate and xenophobia” are set to crush efforts to reform U.S. immigration laws.

Meanwhile, many Hispanic-Americans are upset with President Obama for moving too slowly on comprehensive immigration reform and signing a health care bill that prevents illegal immigrants from receiving benefits under the law. And in Congress, Democrats who support integrating illegal immigrants into the U.S. economy are finding difficultly recruiting Republican sponsors for a new immigration bill — as both sides worry about a potential backlash in the November elections over the thorny issue of what to do with the estimated 11 million to 12 million people living and working illegally in the United States.

Tens of thousands of people demonstrated on the National Mall in March calling for legislation to give legal status to millions of illegal immigrants in an attempt to keep the divisive issue of immigration reform on the front burner of the Obama administration’s agenda.

Writing in the Mexican Embassy’s latest newsletter, Ambassador Arturo Arturo Sarukhan said he recognized that the immigration debate is a domestic matter for Americans to decide.

But, he added, “we must also seek to push back against those who would inject prejudice, hate and xenophobia into a debate that needs to be waged on the merits of sound arguments and not through baseless polarization.”

That comment drew a heated response from the Federation for American Immigration Reform (FAIR), which opposes any “amnesty” for illegal immigrants. “This is a blatant interference by Mexico in our domestic affairs,” spokesman Bob Dane told The Diplomat.

In his newsletter, Sarukhan said, “Mexico fully understands that immigration reform in this country is a domestic process that will be and should be addressed and debated solely by Americans and their representatives in Congress.” However, the ambassador added in his favorite catch phrase: “You need two to tango.”

“Mexico has a central role to play in getting immigration right and has been doing so since the beginning of President [Felipe] Calderón’s administration,” he wrote. “We have set in motion a set of programs and structural reforms to create more jobs and trigger growth that, in time, will reduce migration levels.”

Those levels have already gone down slightly as a result of the economic crisis. For now though, Mexico continues to rely heavily on money received in remittances from both legal and illegal Mexicans in the United States, receiving about $24 billion a year in remittances.

The ambassador acknowledged the difficulties of fixing what many regard as a “broken” U.S. immigration system, with supporters of an overhaul advocating for a pathway to citizenship for the country’s undocumented workers, while critics argue the focus needs to be on securing the border rather than providing amnesty for lawbreakers who drain social services.

That controversy is once again brewing even though immigration reform had largely faded from the headlines in recent years. At the height of the debate in 2006 and 2007, the Bush administration had proposed tougher border enforcement and workplace monitoring, as well as a program to bring in guest workers for U.S. employers and a pathway for millions to earn legal status. The effort earned some bipartisan support but ultimately stalled in the face of strong conservative opposition.

But a recent push has put immigration back on the front burner. In March, thousands of demonstrators crowded onto the National Mall demanding that Congress pass comprehensive reform. 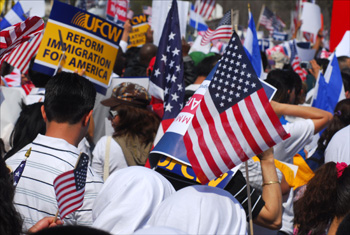 And this month, President Calderón will bring Mexico’s views to Capitol Hill as he addresses a joint session of Congress on May 19. During the official state visit to Washington — marking Obama’s second since taking office — Calderón will become the first Mexican president to speak to both chambers since former President Vicente Fox appeared at the Capitol in 2001.

The visit will no doubt resurrect the immigration debate in the halls of Congress, where Democrats have tepidly begun broaching the issue. In December, Rep. Luis Gutierrez (D-Ill.) introduced a bill to create an avenue for legal status for illegal immigrants if they have not committed a felony and can prove they have been working in the United States, in addition to paying a $500 fine, submitting to a criminal background check and learning English.

In the Senate, New York Democrat Charles Schumer has also been working on an immigration “blueprint” that would, among other things, require U.S. citizens and legal immigrants to obtain a new high-tech Social Security card to ensure that illegal workers cannot get jobs; strengthen border security and interior enforcement; creating a process for admitting temporary workers; and implement “a tough but fair” path to legalization for those already here.

Initially, when Schumer announced the plan in March, he seemed to have the support of a Republican co-sponsor in Lindsey Graham. However, the South Carolina senator has since apparently dropped his earlier support for the effort.

“Graham backed out, and Schumer is left at the alter looking for another GOP co-sponsor,” said FAIR spokesman Dane.

Indeed, it remains to be seen if the effort will muster any energy in a Congress already drained by the battle over health care and still consumed by ongoing debates over a new Supreme Court Justice nominee, financial regulation and government spending — not to mention the fact that many lawmakers aren’t eager to wade into a contentious fight over immigration ahead of crucial elections and in the midst of an economic downturn.

What’s more likely is that in the absence of federal action, individual states will continue a piecemeal approach by enacting local immigration laws — such as a recent bill in Arizona that would direct police to check a person’s immigration status if there is a suspicion of criminal activity. The controversial measure has prompted a furious backlash among critics who say it amounts to racial profiling, adding fuel to an already impassioned nationwide debate.

Even the mere prospect of a federal immigration bill — however remote — has already stirred noisy rancor in the streets. Several pro-immigrant grassroots organizations have announced rallies across the country in upcoming weeks, while conservative tea party activists have been holding their own vocal demonstrations and increasingly shifting their attention to immigration — setting the stage for a long summer of protest and counter-protest.

Recently for instance on tax day, April 15, advocates argued that legalizing illegal immigrants could add billions in revenue to the federal government. As tea partiers gathered in Washington to protest high taxes and government spending, members of the Center for Community Change delivered five boxes of blank income tax forms to congressional offices to symbolize the lost revenue from illegal workers.

“Here there are people who don’t want to pay taxes,” spokeswoman Mary Moreno told the Washington Times, referring to the Tea Party protestors. “And we’re saying there are all these people who want to carry the load, and we don’t allow them,” she added, referring to illegal immigrants.

In fact, a recent report from the Immigration Policy Center and the liberal Center for American Progress argues that comprehensive immigration reform, which includes a legalization program for unauthorized immigrants and enables a future flow of legal workers, would result in a large economic benefit — a cumulative $1.5 trillion in added U.S. gross domestic product over 10 years. In contrast, a mass deportation-only policy would result in a loss of $2.6 trillion in GDP over 10 years, the report claims.

But one number will be hard for the American public to overlook: Adding some 11 million undocumented immigrants to an already-strained workforce where millions of unemployed U.S. citizens can’t find jobs. 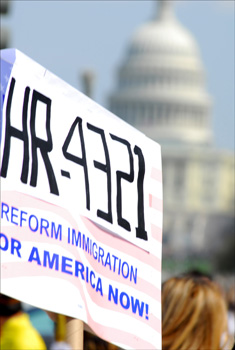 Even before the economic crisis hit, then-President Bush was unable to overcome skepticism among the public and within the Republican-controlled Congress when he introduced his immigration proposals. After the failure to pass legislation in 2007, Latinos flocked to vote for Obama in the 2008 presidential race. Now, conversely, many of those same Latinos are frustrated with Obama for failing to make immigration reform a top priority in his first year in office when congressional Democrats were not facing the prospects of losing the House in November’s elections.