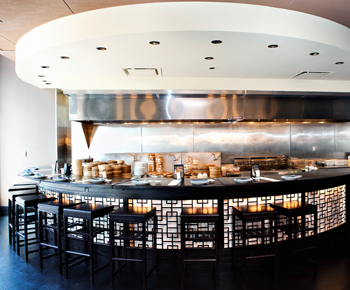 Welcoming the Chinese New Year and the “year of the golden rabbit” seemed to call for firecrackers and dancing dragons, so on a recent chilly February morning we headed out to Chinatown for our annual dose of sparkly cordite and savory Asian fare. It also seemed like the perfect occasion to stop by Ping Pong Dim Sum to see how things have evolved since its opening a little over a year ago.

Less than two blocks from the iconic Chinatown arch, Ping Pong Dim Sum is worlds away from the old-fashioned Chinatown of yesteryear. And although the restaurant, like many of the hotspots that have opened up since the Verizon Center inspired revitalization of the area, is part of a chain, it’s a far cry from the formulaic tourist traps that are crowding out the neighborhood’s original inhabitants.

Ping Pong first opened in London in 2005, the inspiration of Kurt Zdesar, former international manager at the highly successful Japanese chain Nobu. Ping Pong’s concept, based on the ancient tradition of the Chinese teahouse, quickly became a success and several new branches opened in London, followed by Brazil and Dubai. The Chinatown spot in D.C. was the first location in the United States, though another is slated to open soon in Dupont Circle.

Ping Pong Dim Sum in Chinatown puts a refined twist on the enormously popular culinary art form that serves diners “a little bit of heart” (the translation of dim sum).

The Chinese adopted the tapas concept long ago, when teahouses, catering to local farmers and travelers along the Silk Road, served up small dishes of savory and sweet treats along with the mainstays — tea and conversation. Over time these small bites evolved into an enormously popular culinary art form that serves diners “a little bit of heart” (the translation of dim sum) with every bite.

Ping Pong’s menu, comprising nearly 50 separate dishes, is sorted by cooking style — baked, steamed, griddled, clay pots, fried and soups, along with salad, vegetables, sticky rice and other offerings. This is rarified dim sum. There are no steaming piles of pickled pig’s feet or deep fried balls of shredded taro that you often encounter at the high-volume weekend brunch spots around the area. Pieces are more refined and delicate. (And unfortunately in some cases subtle to the point of being bland, as is the case with the spinach and mushroom griddled dumpling and the crispy prawn ball that’s more crisp than taste.)

The menu does offer some of the standards in traditional preparations. For example, Pork Shu Mai, steamed dumplings with a basic pork and shrimp filling topped with a goji berry, are delightful in their simplicity, and the twice-cooked honey-glazed ribs hew closely to this hearty staple. But the other steamed dumplings are far more unusual, with combinations such as chive and shrimp, scallop and shitake mushroom, as well as black shrimp and garlic in a black squid ink pastry. While all the food groups are represented, there’s an emphasis on seafood (shrimp primarily) and the large number of vegetable choices make this a great destination for vegetarians.

Some of the tastiest options at Ping Pong are the puffs — honey-roasted pork, chicken or vegetable. The baked pastry is light and flaky, and the filling is ever so slightly sweet. The salads too are a must, particularly the Asian leaf and three mushroom salad. Dressed in a very light sesame dressing, it’s a nice counterbalance to the starchy dumplings and buns. Soups are also tasty, with the vegetable wonton bearing a strong resemblance to the Thai favorite tom kha gai.

Unlike a typical dim sum restaurant, the dishes are not pushed around on carts but ordered from a list a la sushi and brought to the tables. This approach has its pluses and minuses. Each dish comes in its own labeled steaming basket so you know what you’re eating. On the down side, because there is a delay between when you order and when you get your food, it’s easier to over order and harder to decline if you don’t like the looks of something when it arrives.

All the dishes at Ping Pong are actually prepared in a test kitchen in Rockville, Md., where executive chef Darren Wightman presides over their careful construction and crafts a constant infusion of new dishes designed specifically for local palates. This flexibility is one of the features that keeps the Ping Pong brand from feeling like a chain. It’s also one way to ensure consistent quality of the product — and all of the dishes at Ping Pong, though perhaps not always spiced to appeal to all diners, have been consistently good.

Prices at Ping Pong are also surprisingly reasonable considering the amount of labor that goes into the preparation. (A video on Ping Pong’s website illustrates just how much work these “little bundles of deliciousness” are to make.) Every single piece is handmade, from mixing the filling, to preparing the pastry, to stuffing and sealing the packet. And while the prices are not high, it’s very easy to rack up a big bill as the temptation to taste everything on the menu is difficult to resist. 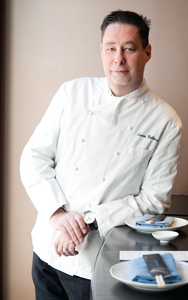 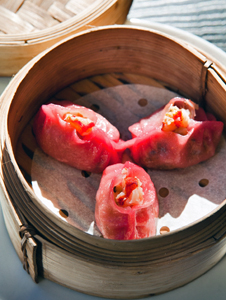 With its watering-hole inspiration, the liquid menu at Ping Pong is as important as the food. First, of course, there are teas: oolong, green, yellow, black and white, as well as teas made from hand-tied “flowers” that bloom when water is added. The Red Amaranth is slightly fruity, while the Dragon Eye made with a golden calendula flower and an arch of jasmine flowers is much more earthy. Next comes a delicious array of cold teas and fruit concoctions, many of which taste even better than they sound. The lemongrass muddled with jasmine iced tea is sweet and slightly spicy. A bubble tea of raspberry purée, jasmine iced tea and black pepper is startlingly good if you don’t mind the chewy tapioca pearls.

Ping Pong knows its audience and has crafted a collection of long and short cocktails, martinis and shooters that range from traditional and classic to innovative and inspired. In an interesting twist on a revived classic, Ping Pong offers a vanilla and chili sidecar. With Martell VS cognac, Triple Sec, lemon juice and vanilla-chili sugar, this version is less sour than the traditional sidecar with a rounder flavor and quite a bite. A soft and sweeter choice, the lychee and roses martini — Bombay Sapphire gin, rose syrup, lime and lychee juice —goes down smoothly. For a tropical taste, try the pineapple and ginger mai, a combination of vanilla Tuaca and caramel vodka that creates a surprising base intensified by the addition of pineapple, ginger, lime and black pepper.

Desserts are rarely a notable item in Chinese restaurants, but Ping Pong has developed a few savory dim sum meal-enders that might just change some minds. For the chocolate bun, pure white steamed buns are stuffed with a Valrhona chocolate and coconut filling that peeks out the top. It’s a bit unusual but quite delicious. Another good choice is the moist, warm ginger cake with a strong essence of fresh ginger that’s perfectly paired with cinnamon ice cream. Likewise, the crispy banana rolls contrast nicely with a spicy Sichuan chocolate sauce.

There’s also a deep-fried roasted pineapple and coconut spring roll served with a rich butterscotch sauce. (There is absolutely nothing Asian about the butterscotch sauce but it’s superb nonetheless.) A selection of fairly exotic fruits and house-made sorbets are also on the menu, but are somewhat less interesting.

Ping Pong’s design is sleek and minimal with just hints of its Asian inspiration. The 238-seat space is stark with dark woods and a few decorative touches that create an elegantly understated though somewhat cave-like atmosphere enhanced by low lighting. The centerpiece of each round table is a flat, illuminated full moon. In the evenings, these glowing pools of light dot the room to produce a striking, attractive effect. It’s an unusual ambience for a Chinese restaurant, but Ping Pong is not catering to the traditional clientele. With its spacious bar, excellent happy hour and promotional parties, Ping Pong is a hotspot that has attracted the hip and chic since its opening.

On the flip side, ever since its opening, one of the challenges Ping Pong has faced is inconsistent service. This has improved, but it is still possible that you may wait a while for your drinks, get the wrong food, or encounter less-than-superior customer service at the front door. However, whatever the deficiencies, the overall goodwill of the staff and the quality of the food make it a pleasant visit every time.

With plans to open a new branch in Dupont Circle this year, many more D.C. diners will have the chance to sample the little bits of heart that have gotten Londoners posting admiring Ping Pong videos on YouTube. Don’t go expecting classic Chinese dim sum, but do go. Ping Pong’s inventively fresh dim sum won’t disappoint.