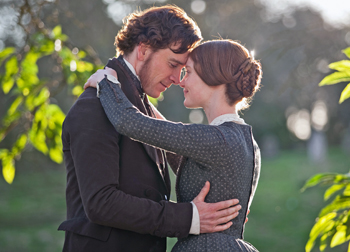 After the intensity of his visceral Spanish-language saga of a Central American illegal immigrant’s journey north in “Sin Nombre,” Japanese-American director Cary Joji Fukunaga wanted to do something completely different. So he jumped at the chance to tackle a BBC adaptation of Charlotte Brontë’s “Jane Eyre” by screenwriter Moira Buffini. Fukunaga wanted to learn to direct a movie in a classical style, yet the result also exudes modern touches, bringing the timeless story ever closer to today’s audience.

Australian-Polish actress Mia Wasikowska (“Alice in Wonderland”) delivers a quietly powerful performance as Brontë’s eponymous heroine, a long-suffering young English governess who nonetheless has complete confidence in her abilities and self-worth. Even though she has lived without affection for half her life, she fully believes that she deserves to love and be loved. German-Irish actor Michael Fassbender (“Inglourious Basterds”) makes a fine brooding lord of the manor, playing the legendary secretive romantic hero of Edward Rochester. Academy Award winner Judi Dench and Golden Globe Award winner Sally Hawkins lead the rest of the impressive ensemble cast, which also includes Tamzin Merchant (“The Tudors”), Jamie Bell (“The Eagle”), Holliday Grainger (“The Borgias”) and Imogen Poots (“28 Days Later”).

In the 19th-century tale, Jane Eyre runs away from the remote, sprawling estate of Thornfield Hall. Finding shelter from a violent storm, she’s taken in by a man of the cloth, St. John Rivers (Bell), and his two sisters, who treat her like the family she’s never had. Via flashbacks, Jane looks back at her hard life. After being orphaned at age 10, Jane’s evil aunt Mrs. Reed (Hawkins) kicks her out of her lavish home, even finer than Thornfield, and sends her off to an oppressive boarding school for poor girls. After moving to Thornfield to serve as governess to Adele, the ward of Rochester, Jane becomes friends with Thornhill’s kindly housekeeper, Mrs. Fairfax (Dench). And of course she develops a tempestuous relationship with her overbearing master, eventually softening him but in the process uncovering his long-held secret. 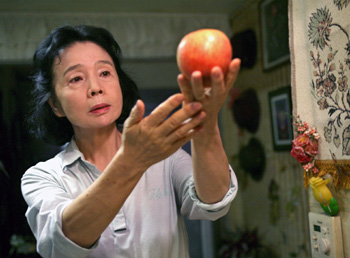 Iconic South Korean actress Yun Jung-hee gives a stellar performance in “Poetry” as an elderly woman forced to toil below her station in life.

South Korean director Lee Chang-dong follows up his fine 2007 film “Secret Sunshine” with the exquisite work of “Poetry,” which won Best Screenplay at Cannes. With pitch-perfect tone, it captures the uncomfortable though acceptable situation of Mija (Yun Jung-hee, a fabulous icon of South Korean cinema), an elegant elderly woman forced to accept living below her station. Yun’s startling, silent tour-de-force performance dominates the frame, where she commands the viewer’s attention whenever she’s on screen.

In South Korea, 66-year-old Mija takes care of her unappreciative teenage grandson, Wook (Lee David), while his mother is away in Busan seeking employment. To support the family, Mija toils as a house cleaner for a stroke-paralyzed old codger who’s still appreciative of her beauty. So she spends her life taking care of the old as well as the young, but Mija has ambitions of her own. By happenstance, she finds herself in a poetry class offered by the neighborhood cultural center.

Her newly desire to precisely define herself by the written word broadens Mija’s horizons. Sadly, that late awakening is tragic against the backdrop of developing dementia from Alzheimer’s disease. Nonetheless, her newfound poetic inclination provides her with the inner strength to assuredly handle an encounter with brutal violence involving Wook and his classmate.

Yun’s sly acting style rather nicely complements the carefully restrained direction of Lee, resulting in a distinctive character study that leaves lasting memories. In today’s modern world dominated by action-packed blockbusters, it’s a treat to relish in the simple pleasures of watching a long-past-fresh human rediscover value in herself. Everything about Mija and her mind-numbingly routine existence seems commonplace, just like the streets of the anonymous city in which she lives. In this case though, the whole is more valuable than the sum of its parts. 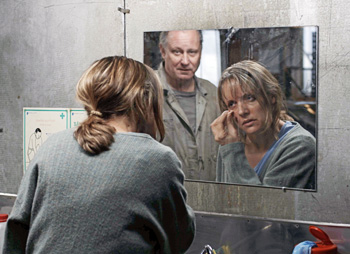 Stellan Skarsgård, left, and Jannike Kruse hit it off in “A Somewhat Gentle Man.”

Obviously, a big attraction is the always dependably solid performance of Swedish international movie star Stellan Skarsgård (“Good Will Hunting,” “Mamma Mia!”). Here he plays Ulrik, who, after 12 years behind bars, almost reluctantly leaves on parole for murder. The pony-tailed, bulky former tough guy both moves and thinks slowly. Since he doesn’t have any plans for his post-prison life, he winds up accepting help from Jensen (Bjørn Floberg), his previous mob boss, who sets him up with a gig repairing automobiles. Ulrik moves into a crummy flat overseen by Jensen’s taciturn sister (Jorunn Kjellsby), a landlady who provides home-cooked dinner with sex for dessert.

Meanwhile, Jensen insists that Ulrik put a revenge hit on the rat who snitched on him back in the day, putting him in the slammer. Well, now that he’s a somewhat gentle man, Ulrik would prefer to stay on the straight and narrow, so he finds another way. He also gradually warms up and develops a tender romance with a fetching coworker (Jannike Kruse). His emotional development moves him toward closing the gap with his estranged ex-wife and son (Jan Gunnar Røise), who barely knows his father after 12 years apart. And in his newfound humanity, Ulrik finds a modest dose of redemption.

The 19th annual Environmental Film Festival in the Nation’s Capital returns March 15 to 27, with this year’s theme examining the critical connections between energy and the environment. The massive festival screens 150 documentary, narrative, animated, archival, experimental and children’s films from 40 countries — including 80 D.C., U.S. and world premieres — to more than 26,000 audience members in 60 venues sprawling across the Washington area, including various embassies. Other impressive stats: 55 filmmakers and 94 special guests will discuss their work, presented in collaboration with more than 100 local, national and global organizations.
www.dcenvironmentalfilmfest.org

The Environmental Film Festival plays at AFI from March 18 to 25. Before that, check out a revival of “Black Orpheus” (March 4-9) and the “Jean Harlow Centennial Celebration” (March 5-8). The “Alfred Hitchcock Retrospective” concludes “Part I: The British Hitchcock” (through March 31). “Backwards and in High Heels: Ginger Rogers Centennial Retrospective” continues through April 7.
(301) 495-6700, www.afi.com/silver